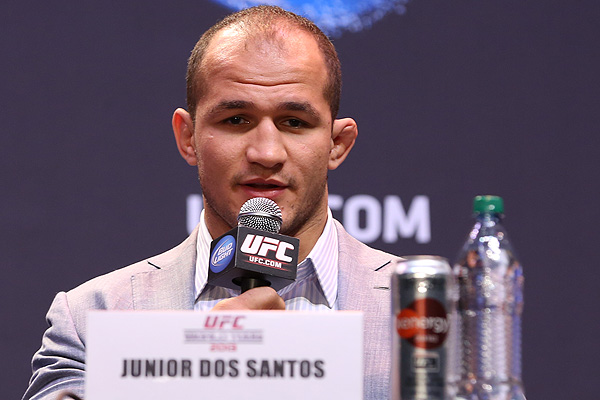 Watching the performance of Junior dos Santos against Ben Rothwell at UFC Fight Night 86 was like watching an artist mesh ink onto a canvas. While an artist uses individual strokes of a brush to create a masterpiece, dos Santos combined a bevy of body shots and smooth movement to create a 50-45 masterpiece of his own.

It wasn’t that long ago that dos Santos was on top of the UFC heavyweight mountain. He had knocked out the reigning champion, Cain Velasquez, in just over a minute on the UFC’s debut on Fox to become a star of the division. In his first title defense, JDS came as close to perfection as one could get when he dispatched Frank Mir at UFC 146.

Unfortunately for the Brazilian, the wheels began to fall off after UFC 146. Dos Santos was bloodied and battered across the cage for five rounds in his rematch against Velasquez at UFC 155. Dos Santos added another highlight-reel finish by dropping Mark Hunt with a spinning hook kick, which set up a pivotal rubber match with Velasquez. The result would be similar to their second encounter, though, with Velasquez pushing dos Santos against the fence and unleashing a never-ending display of violence.

It took over a year for dos Santos to climb back into the Octagon, but when he did, for a fight with rising contender Stipe Miocic, he looked like the same fighter we’d seen against Velasquez. He had dangerous power in both hands, but he was susceptible to being backed against the fence. Despite having his hand raised after the fight, JDS had arguably lost his bout against Miocic in the eyes of many fans. It was clear that dos Santos had some serious holes to shore up if he wanted to get another crack at the title.

And then came the Alistair Overeem fight.

The fight had been building for years, ever since Overeem joined the UFC’s ranks. The top two strikers in the division seemed destined to fight in the Octagon, yet outside circumstances always prevented it. When they finally did meet at UFC on Fox 17, it didn’t go exactly as planned. Instead of trading power strikes and displaying the technique we’ve come to expect from both men, they played a very cautious game. Dos Santos in particular seemed extremely afraid to pull the trigger and unleash his devastating punches. Near the end of the second round, Overeem dropped the Brazilian. While dos Santos protested the finish, it was evident that he wasn’t able to defend himself.

The Overeem fight seemed to be the true indicator that dos Santos’ time had come. After taking so much damage in the Miocic and two Velasquez bouts, the Brazilian’s granite chin appeared to have finally cracked. Even worse, the aggressive puncher had put his offense in prevent mode, unwilling or unable to move forward.

That perception completely changed following his performance against Rothwell. The Brazilian used his highly touted boxing skills to hammer the body of Rothwell. He unleashed some combinations reminiscent of the dos Santos that became UFC champion. Even more telling was his ability to get off the fence when Rothwell attempted to push him against it. Dos Santos still managed to step straight back into the cage, but then managed to circle out while avoiding damage. The former UFC champ even smiled and managed to have a little bit of fun during the fight, something we haven’t seen in quite some time.

Dos Santos believes he’ll be a champion again. If he can maintain performances like his showing against Rothwell, then he certainly can. He’s always had great takedown defense and his hand speed is unmatched in the division. The biggest pitfall of his game has always been his movement. He gets backed into the fence in seemingly every fight, but he did show some ringcraft in knowing to circle away before Rothwell could entrap him against the cage.

Perhaps this is just the start of the new and improved dos Santos. He recently moved to American Top Team, but it takes some time to adjust to a new camp before improvements are evident. If the Brazilian can be this poised in future main events, there’s no doubt he has the skills to become champion once again.

However, we should all pump the brakes on the dos Santos champion bandwagon. He’s still just 4-3 since winning the title back in 2011, and one of those wins was the close decision over Miocic. Dos Santos is still going to have problems with wrestlers and clinch fighters who will look to keep him against the fence at all costs.

Dos Santos carries quite a bit of name value, though. With his win over a top-ranked opponent, odds are we’ll see him square off against another top-level guy in the future. It may not be the best course of action to rush the Brazilian back into the fire so quickly, but it’s a route that dos Santos will undoubtedly request to take. If this same version of dos Santos shows up for his next fight, it’s going to be a rough night for anyone stepping into the cage with him.