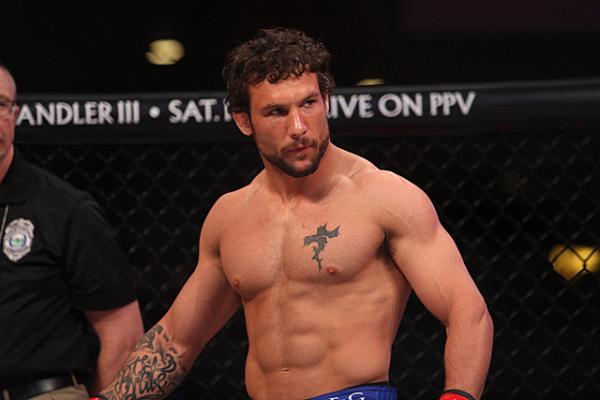 Melvin Guillard has had a lot of ups and downs in his MMA career. The guy has 32 wins and 15 losses along with two draws and two no-contests. He has 21 fights in the UFC alone. He’s also scored 21 victories by knockout or TKO. He might be the reason certain young fighters are in the game themselves. He has power, explosiveness and no fear. The guy will fight anyone.

For his Bellator debut, Guillard was told he could pick anyone on the roster. He picked Brandon Girtz, a fighter who he thought was a great match-up for him. He thought that since he’s fared well against aggressive wrestlers who like to come forward that he would fare well against Girtz.

Girtz was ready to make Guillard pay for that miscalculation. The first round was scored 10-8 in Girtz’s favor by many observers, and most of those observers felt that Girtz won all three rounds just as decisively. However, one judge scored it 29-28 for Guillard, which left Girtz with a split decision win instead of the deserved unanimous verdict.

“It was maybe the fifth takedown and [Guillard] said something like ‘Screw you,’ so I told him, ‘You shouldn’t have picked me,’” Girtz told Combat Press. “I know he was a wrestler, but he had nothing for me. He knew he was done and wasn’t coming back.”

A native of Minnesota, Girtz started off playing hockey. In high school, he found wrestling, but he didn’t really come into his own until he walked on at Minnesota State. Maybe it was the timing. Maybe it was the coaching. Either way, Girtz made All-American at the NCAA Division II school.

Like so many wrestlers, Girtz has found success in MMA. After going pro in 2008, he put together an impressive 8-2 record before he signed with Bellator in 2012. Since joining Bellator, he has compiled a 5-2 run, including the win over Guillard.

Before his fight against Guillard, Girtz was recovering from an ACL tear.

“I had been wrestling for years, so it wasn’t really that big a deal,” explained Girtz. “I was able to ease back into training in camp, and I was confident that I was prepared for anything he would be able to throw at me.”

In his 16th fight, which came before the Guillard bout, Girtz finally scored his first TKO against Benny Madrid.

“A lot of my team have told me I have heavy hands,” said Girtz. “I felt like I had been searching for it for so long. Once I stopped trying for it and went with the fight, I was ready for the opportunity.

“Anything can happen in MMA, so of course we all have to be prepared. But there really is a difference mentally between me before and me now. I am not going to go into any fight looking to find a knockout or submission, but I am confident that this won’t be my last.

“I am fighting with my instincts now. The reason we hit the ground is [because] it’s easy. It’s just easy for me to get them there, and I am not not going to put them in deep water just to scope a knockout, but I am ready to go wherever the fight takes me.

“I want people to remember me as someone who leaves it all in the cage [and] who gives the fight his all. I want them to say I am explosive and ready, but, mostly, full of heart.”

At Bellator 96 in June 2013, Girtz fought Derek Campos. It was his first loss on the big stage. They were expected to face each other again in March 2014 in the Bellator’s season-10 lightweight tourney, but for some reason Gritz ended up facing Derek Anderson.

This Friday, Girtz has the opportunity to redeem himself against Campos, who has a record of 15-5. Both lightweights have fought for the promotion since 2013 when they faced each other. Campos just faced Michael Chandler and lost via rear-naked choke in the first round.

“This is my opportunity to make a statement,” said Girtz. “I’ve evolved more. I am mentally into fighting more now than then. Fighting is skill and technique, but it’s more mental than anything. Focus was always my Achilles’ heel. I would beat myself. I’ve always been a hard worker. I’ve always been skilled, but never lived up to my potential.

“The team at Grudge has been a big part of it. They teach me to have fun with it and to be ready for the ‘anything that can happen’ in MMA. I have the best training partners. They really are more of a family to me. Seeing them go through it all — wins, losses, fighting for their championships — it brings out the best in me.”

Brandon would like to thank his coaches and team at Grudge MMA and his father and his family. He would also like to thank his sponsors: Vapor FI, Affliction, Hayabusa, Garden of Life and G-Fuel. Follow Girtz on Twitter: @BrandonGirtzMMA
Advertisement