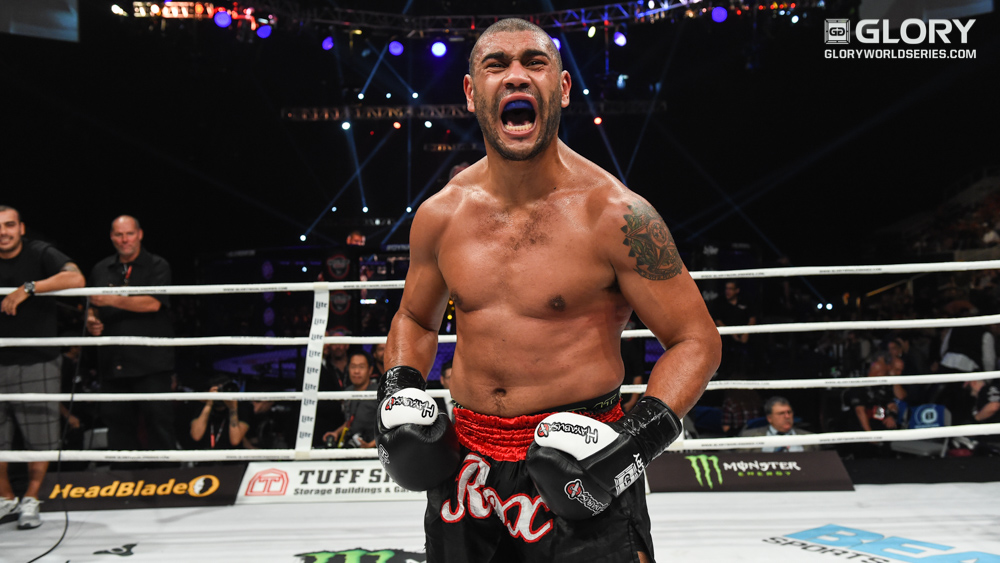 The numbers in parentheses represent the fighter’s ranking from last month. Fluctuations in the October rankings for fighters who were not active are due to additional staff members joining the rankings panel.

Only one fighter in the top 10 was in action in September. Romania’s Benjamin Adegbuyi bounced back from his title defeat to top-ranked Rico Verhoeven with a third-round TKO of Alexandr Soldatkin at Tatneft Cup 2015 Final in Russia. The 30-year-old maintained his fourth spot in the rankings and will look to build on the win in the GLORY 24 heavyweight contender tournament in Denver.

Dropped from the rankings: Igor Jurković (10)

There’s a new titleholder in the light heavyweight division. Brazil’s Saulo Cavalari captured GLORY gold at Dynamite with a decision win over Zack Mwekassa. Cavalari kept his No. 3 ranking, behind former GLORY champ Gokhan Saki and Tyrone Spong. Mwekassa’s performance was enough for him to climb one spot to eighth, despite falling short.

Two fighters in our top 10 were in the ring in September. Fourth-ranked Jason Wilnis stopped David Keclik at FFC 19 in Austria, and China’s Fang Bian earned a decision win over Aliaksandr Sviryd of Belarus at Wu Lin Feng World Championship 2015. Both fighters kept their position from the previous month.

Dropped from the rankings: Alexander Stetsurenko (8)

September saw action in the top and bottom of the top 10. Ukrainian Artur Kyshenko outworked France’s Cedric Tousch at It’s Fight Time 2 in Germany to climb to the No. 3 slot in our rankings, while England’s Paul Daley returned to the ring at Dynamite. Daley’s performance against usual MMA fighter Fernando Gonzalez wasn’t as dominant as most expected, leaving him in the ninth spot.

Dropped from the rankings: Andy Souwer (8)

Second-ranked Sitthichai Sitsongpeenong continued to prove why he’s one of the best fighters on the planet, cruising past Jonay Risco at Kunlun Fight 31. Next on the Thai’s radar is No. 1-ranked GLORY lightweight champion Robin van Roosmalen at GLORY 25. Also in action in September was kickboxing legend Andy Souwer, who dropped a decision to Hinata Watanabe at Rebels: 38 and dropped from the rankings.

Dropped from the rankings: Tetsuya Yamato (9)

Brazil’s Minoru Kimura made the biggest waves in the lower weight classes, edging Ren Hiramoto at K-1’s Survival Wars. The win sets up a clash with top-ranked Kaew Fairtex at the promotion’s end-of-year event. Also in action this month, Thailand’s Pakorn PKSaenchaimuaythaigym picked up a pair of wins at Wu Lin Feng World Championship 2015 in China.

Only fourth-ranked Sittihchai Sitsongpeenong saw action this month, but with new writers joining our rankings panel this month, the pound-for-pound ranks have been shuffled.