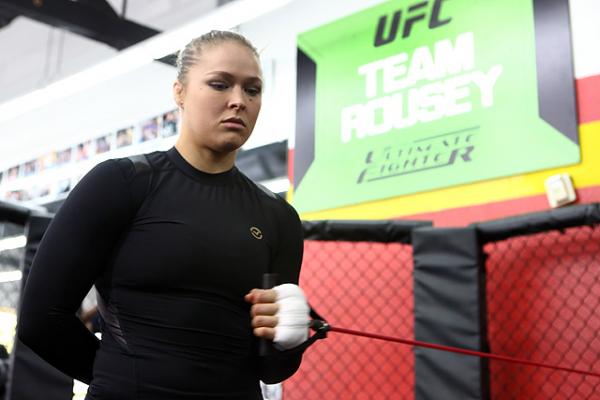 The Cleaner: A Look at Ronda Rousey’s Dominance

Given that it’s tax season, it’s a good time to remember that there are three guarantees in life: death, taxes and Ronda Rousey once again showing why she is the best female fighter on the planet with a first-round demolition of her opponent.

Rousey’s performance at UFC 184 last month was her finest to date. She submitted Cat Zingano, widely regarded as Rousey’s biggest challenge, in 14 seconds. While Rousey was aided by Zingano’s absolutely horrible strategy, the champ’s virtuoso performance led to another discussion of who has what it takes to dethrone Rousey. It also led to a ridiculous conversation of whether or not Rousey could compete against and defeat male fighters in the UFC’s bantamweight division. The less time spent on that absurd notion that accomplishes nothing but trying to discredit the great fighter Rousey is, the better.

Of course, the first name that always comes up is Cris “Cyborg” Justino, the Invicta FC featherweight champion. She is expected to drop to 135 pounds for a fight with Invicta this summer before moving on to a fight with Rousey. However, Cyborg attempted a drop to bantamweight last year and abandoned those plans. So, don’t hold your breath on the long-awaited grudge match between Rousey and Cyborg happening anytime soon.

Rousey recently expressed a desire to fight Bethe Correia, who battered two of Rousey’s “Four Horsewomen” teammates and has been calling out Rousey ever since. Jessica Eye has also staked her claim to a title shot, but neither of these women pose a real threat to Rousey.

During UFC 184’s post-fight coverage, Daniel Cormier floated the idea of his colleague Miesha Tate getting a third crack at Rousey. There are just a few problems with this idea. First, trilogies should be reserved for scenarios where each fighter has a victory over the other. Second, there’s no reason why the third time would be a charm for Tate. While she is the only woman to go further than the first round with Rousey, Tate has plateaued as a fighter while Rousey has gotten better. If the two were to fight a third time, there is no reason to believe the result would be any different.

So, where does this leave Rousey? In my opinion, she has cleaned out the UFC women’s bantamweight division. There is no one who poses a credible threat to her. If Zingano adjusted her strategy and received another shot at Rousey, she might have a chance of winning. Beyond that, if Rousey decided to go out on top and build on her burgeoning film career, I don’t think anyone would hold it against her.

Rousey is currently on a run akin to Anderson Silva’s run atop the UFC’s middleweight division. Silva dominated everyone in his path and, except for his first fight with Chael Sonnen, made it look easy. Rousey’s hardest fight to date was against Liz Carmouche. Carmouche had Rousey in a rear-naked choke in the first round of their fight in 2013 before Rousey was able to escape and secure another armbar victory.

Silva’s reign atop the middleweight division came to an end when the previously unknown Chris Weidman came along and showed no fear while taking the fight to Silva. Maybe that’s what needs to happen with Rousey. She needs to find an opponent who will get right in her face, give her no quarter and take the fight to her. Zingano attempted as much at UFC 184, but her overzealousness ended up costing her dearly.

Until Rousey finds her own Chris Weidman, we can add another superlative to the many that are already attached to the women’s bantamweight champion: cleaner. Rousey is fresh out of worthy challengers to her crown, a task she accomplished by cleaning out her division.