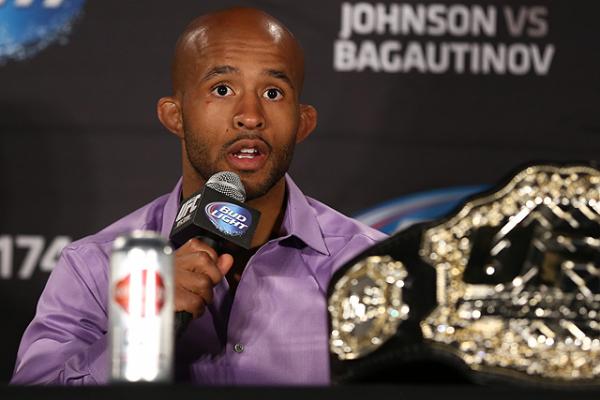 Following yet another spectacular performance from Demetrious “Mighty Mouse” Johnson at UFC 191, the UFC flyweight champion threw a verbal haymaker at a group of MMA fans.

Speaking to Ariel Helwani of MMAFighting.com, Johnson responded to the fans who were booing heavily during his headlining bout with John Dodson.

“They booed Frank Mir and Andrei Arlovski, and they might have even booed Anthony Johnson,” the flyweight champ said. “The fans are fans. They’re just fucking idiots.”

It’s an unusual response from the normally reserved Johnson, but it’s a response to which all MMA fans should reply with, “Please sir, I’d like some more.”

This is not because we enjoy being called “fucking idiots” or having other insults thrown our way, but because we’re finally getting to see some emotion out of the champ. Up until this point, we’ve seen very little of the man behind the UFC belt. By all accounts, he’s a nice guy and appears as a family-centric man during his time in front of the UFC cameras, but there hasn’t been anything thus far to spark fans to get interested in Johnson and his reign of terror atop the flyweight mountain.

Since becoming UFC flyweight champion at UFC 152, Mighty Mouse has looked about as close to invincible as a fighter can appear. He stumbled a bit in his first meeting with John Dodson, but it became clear after Saturday’s blowout victory in their rematch that Johnson has far surpassed any potential title challengers. Connor Ruebusch and Patrick Wyman described it perfectly on their Heavy Hands podcast: Johnson takes the fight out of the fight. When one guy has clearly surpassed the field in terms of talent, there needs to be an underlying story for fans to be invested in.

That was supposed to be the case when Johnson faced Dodson at UFC 191. In 2013, Dodson had given Johnson his toughest test to date, and it was believed that Dodson possessed the speed and power to give Johnson a run for his money in the rematch. Instead, Johnson completely schooled Dodson for 25 minutes. Dodson managed to score a measly 16 significant strikes to the head of Johnson over the course of five rounds. And yet, while Johnson was in the midst of a technical masterpiece, fans in attendance were booing the fight.

Honestly, can you blame them?

I can already hear the MMA hipsters and technical wizards adjusting their non-prescription glasses, prepping themselves to defend the UFC flyweight champion. However, while I can certainly appreciate the brilliance of Johnson as a fighter, I as a fan was not necessarily entertained. Part of it may have been that rather lackluster co-main event, something that has plagued Johnson-headlined cards in the past. But after the first couple of rounds, the interest in Johnson vs. Dodson waned. And while Johnson points the blame back at fans for a lack of intelligence, there’s certainly more than that as to why fan interest in Johnson isn’t on the same level as other dominant champions.

Arguments over why Johnson isn’t on the same level of being a pay-per-view draw as fighters like Georges St-Pierre and Ronda Rousey are numerous. But unquestionably the biggest concern for the UFC and fight fans is the fact that thus far Johnson has looked leagues above his counterparts. His domination even surpasses the dominance Rousey has displayed over the women’s bantamweight division. Yes, Rousey gets the highlight-reel finish, but the level of competition that Johnson is outclassing is far better than what Rousey has faced. However, one thing Rousey does better than almost everyone in the fight game is to insert a conflict on a personal level and force fans to choose sides.

Thus far in his career, Johnson has more or less been the type of guy who clocks in on fight night, dominates the opposition and clocks out afterward. He hasn’t had to go against the type of fighter that will attack him through the media. Dodson attempted to, calling Johnson “boring,” as have others. But to date, there hasn’t been a reason for fans to be invested in a Johnson fight other than to watch him dominate the opposition. If Johnson’s opponents aren’t up to the task, it has to be the champion’s prerogative to make fans care.

Johnson doesn’t need to go on a Chael Sonnen-esque Twitter assault. He doesn’t have to insult nearly everyone in the room, a la Conor McGregor. That’s simply not who he is. But what he can do is be a little less “politically correct” in his responses to media members. His interview with Helwani post-UFC 191 was a great example of what he needs to say moving forward. While it’s not wise to continually insult the paying customer, it does let us see a little more personality from Johnson. He’s rightfully tired of showing up to work and having an arena of fans boo his performances. He didn’t say anything wrong or anything he’d regret later on. Johnson simply spoke from the heart.

Johnson’s statements made to Helwani did more to grow fan awareness for the champ than any of his commanding performances. If you’re one of those fans who were booing or didn’t feel entertained by Johnson’s fight, you now have a reason to root against him. After all, the man just insulted your intelligence. Now you’re tuning in for his next title defense, hoping the next guy scores an upset over Mighty Mouse. Or, conversely, you have more of a reason to defend the champion against those “fucking idiots.” Either way, you’re going to tune in to his next fight.

Ultimately, we could spend all day (or at least most of it) arguing about why Johnson isn’t as beloved as other champions. There are a number of reasons why and they differ in importance from one fan to the next. What fans can all agree on — or at least they all should agree on — is that we need to see more of the Mighty Mouse who talked to Helwani after UFC 191. He doesn’t need to sling mud at opposing fighters or throw shade at anyone, but we need to see more of Johnson the person, not Johnson the politically correct champion.