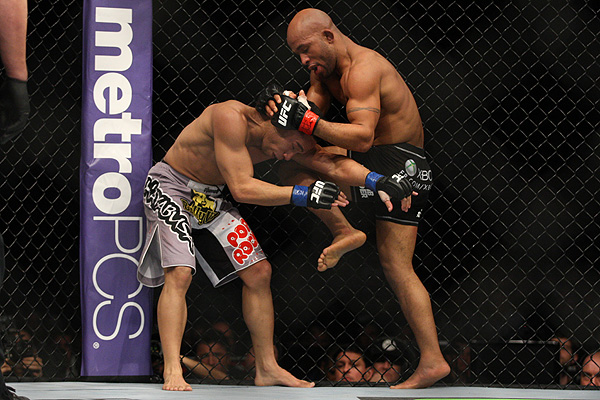 UFC flyweight champion Demetrious Johnson dominated John Dodson in the pair’s second meeting, earning a lopsided decision win to retain his belt. Dodson came out fast, firing kicks, but Johnson showcased great footwork. Johnson’s strategy was clear from the first round, as he found a home for his right straight hand right off the bat. Johnson repeatedly sought single-leg takedowns, which Dodson defended at first, but eventually Johnson was able to take the fight to the ground at will. The right hands from Johnson took their toll as well, as Dodson’s nose bled and his left eye swelled badly. When the final bell sounded, there was no doubt who had won as Johnson secured yet another title defense.

In a battle of former champions Andrei Arlovski outlasted Frank Mir to claim a unanimous decision win. Arlovski was the more active fighter in the first round, landing with combinations. Mir answered with a takedown in round two, but couldn’t do anything with it. Arlovski continued to land on the feet, while Mir looked to clinch along the cage. Mir clipped Arlovski in the third round, but Arlovski quickly recovered and fired off a pair of left hands of his own. The close bout went to the judges, who gave the nod to Arlovski.

Former title challenger Anthony “Rumble” Johnson scored a violent, second-round finish of England’s Jimi Manuwa in their light heavyweight affiar. Johnson saw an opening in the first round and took Manuwa to the ground. He worked for an arm-triangle, but couldn’t finish. In round two, Johnson landed a right hand that dropped Manuwa. A follow-up right turned out the lights on the Brit.

TUF winner Corey Anderson put on a lopsided performance against Polish veteran Jan Blachowicz. Blachowicz attacked with body kicks in the first round and the pair traded takedowns. The pace took it’s toll on the veteran, as Anderson turned to his wrestling game in round two and three. From top control, Anderson battered Blachowicz with punches and elbows. The onslaught earned two 10-8 rounds from each of the judges at cageside.

Strawweight Paige VanZant continued her winning ways, dominating Australia’s Alex Chambers before coercing a tap due to an armbar in round three. VanZant initiated the clinch and pushed Chambers against the fence to start the bout. Chambers scored with punches, but VanZant showcased a clear strength advantage and delivered a series of knees. Round two was all VanZant as she battered Chambers throughout. In the final round, VanZant first looked for a rear-naked choke, but then transitioned for the armbar to earn the finish.

Lightweights Ross Pearson and Paul Felder battled hard for three rounds, with Pearson walking away with a split decision win. Felder threw numerous knees and elbows from the clinch to begin the fight, but Pearson dropped him with a well-timed hook late in the opening stanza. It was more of the same in round two as Pearson’s hook continued to land. Felder marched Pearson down in the final frame, but it wasn’t enough as Pearson claimed the win on the scorecards.

Brazil’s John Lineker made a successful move to the bantamweight division, stopping fellow slugger Francisco Rivera with a first-round guillotine choke. The pair wasted little time throwing down along the fence, with both fighters winging wild, looping hooks. Lineker’s hands and chin were the difference as he absorbed Rivera’s best and dropped him with shots of his own. Lineker flurried for the finish but decided a guillotine choke was a better choice and coerced the tap.

Bantamweight Raquel Pennington got revenge on Brazilian Jessica Andrade, earning a second-round rear-naked choke victory. Pennington landed with combinations on the feet in the opening stanza, but Andrade repeatedly scored with takedowns. In round two, it was Pennington that sought takedowns, but was forced to defend guillotine attempts from Andrade. Late in the frame, Pennington took Andrade’s back and secured the fight-finishing choke.

Brazil’s Tiago Trator stole a split decision win over fellow featherweight Clay Collard to kick off the televised portion of the event. Collard peppered the Brazilian with punches early, but was wild with his strikes and gave up position multiple times. Collard dropped Trator in round two, but was forced to defend an armbar and a leg lock. Trator looked for a rear-naked choke in round three, but Collard escaped. When it was all said and done, two of the judges gave the bout to Trator.

Veteran Joe Riggs earned a second-round disqualification victory over Ron Stallings after an illegal upkick. Stallings controlled the first round with his jab. Riggs rebounded in round two with a massive shot that dropped Stallings. Riggs delivered heavy ground and pound before absorbing the illegal strike and the doctor halted the contest.

TUF Brazil veterans Joaquim Silva and Nazareno Malegarie battled it out for three rounds with Silva eking out a split decision win. Silva landed frequently with a counter knee, while Malegarie scored with a lead left hook. When the back-and-forth action was done, two of the judges rewarded Silva for his efforts.