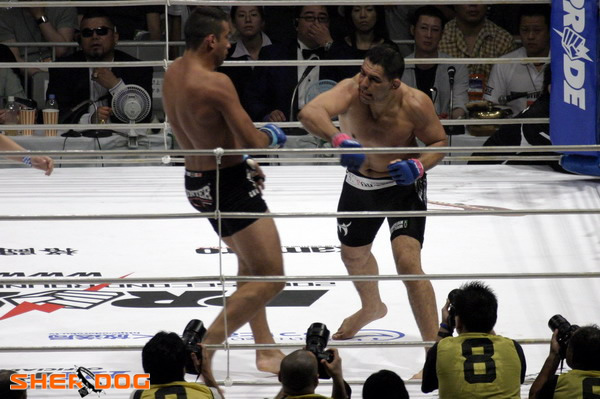 Over the course of this multi-part series, we will take a look back at the greatest upsets, comebacks and victories of Brazilian legend Antonio Rodrigo Nogueira’s 16-year MMA career. In part five, we looked at the end of his Pride title reign, the start of his rivalry with Fedor Emelianenko and his legendary battle with Mirko “Cro Cop” Filipovic. In part six of this career retrospective, we move on to the Brazilian’s journey through the 2004 Pride Heavyweight Grand Prix bracket.

Nogueira entered the 2004 Pride Heavyweight Grand Prix as one of the favorites. In the opening round of the tournament, he defeated Hirotaka Yokoi with an anaconda choke submission that he locked up in the second frame. Nogueira met Heath Herring in his next tournament bout, a rematch of their inaugural heavyweight title bout three years prior. Nogueira locked up an anaconda choke after another stellar performance against the American. The win put Nogueira in the semifinals of the tournament.

It was Aug. 15, 2004. Sergei Kharitonov brought an undefeated record into his semifinal match with Nogueira at Pride: Final Conflict 2004. Equipped with good boxing and a strong grappling background, the Russian Top Team fighter had finished all nine of his opponents to begin his career. Nogueira came into the fight in the best shape of his life, having trained eight months specifically for the tournament semifinals.

The fight started with both men looking to strike in the center of the cage. The scintillating battle began with a back-and-forth struggle to establish a stiff jab. The fighters traded momentum early, both landing jabs and trading low kicks. Kharitonov’s game plan consisted of working the body of the Brazilian, and a right hook early in round one had him headed in the right direction. Another good right hook crushed into Nogueira’s body, forcing the interim champion to shoot a double leg, which he pushed through to the finish and passed to side mount.

Nogueira expertly launched his legs to the opposite side of Kharitonov, setting up his eventual escape from a potential guillotine and subsequent move to the mount. Kharitonov quickly reversed position, but not before Nogueira attempted to lock up an armbar on the Russian heavyweight. Kharitonov quickly postured up, getting out of danger and standing up.

After a brief struggle for submissions thwarted by Kharitonov, the two fighters were stood up by the referee. Kharitonov picked up the volume, crushing another hook to the body of Nogueira. Jab after jab came from Kharitonov as he looked to move the champion back. The striking success was brief, however, as Nogueira shot in for another takedown attempt and muscled Kharitonov down with a trip against the ropes. Nogueira went to work, dominating position and landing a heavy knee strike to his grounded foe. The Brazilian got high on the mount, raining down small punches to the top of the Russian’s head as the round ended.

Both men looked ready for the next round to start. Kharitonov looked to establish the jab right away. The fight was a game of inches on the feet, with both men coming close to landing flush on their opponent’s chin. Kharitonov steadily increased his output as the round went on, landing a stiff straight left to the body and follow-up right low kick. Nogueira rushed in with a high knee that just missed the target. The failure sent him slipping to the ground again. Back on the feet, Kharitonov continued to work, landing a sharp one-two that was met with a solid right cross by Nogueira that rocked the Russian’s head back. Nogueira pushed forward, but Kharitonov’s defense made any opening minimal, forcing the interim champ to work inside the clinch.

Nogueira landed a big knee to the body while caught in a heavy exchange of strikes. Kharitonov pressed forward and landed a good left hand, but Nogueira met him with two solid jabs. A left hand from Kharitonov snapped Nogueira’s head back as the two men began throwing heavy shots. The blood started to pour from the damaged nose of Kharitonov. Nogueira looked to hit the same sweep he did against Bob Sapp. This time, however, Kharitonov easily rolled with him and ended another exciting round on top.

The close verdict was read and Nogueira’s right arm was once again raised in victory, moving him on to the tournament finals. Nogueira ran back to the locker room to prepare for his next fight, a long-awaited rematch with the champion, Emelianenko.

The finals ended in disappointment after an accidental clash of heads just four minutes into the bout. The doctor was forced to halt the bout due to a cut on the head of Emelianenko. The highly anticipated bout was rescheduled for the Pride Shockwave 2004 show on New Year’s Eve later the same year. Nogueira would fall short to Emelianenko again. The Brazilian was unable to land the effective offense needed to take a decision from the dominant champion.

Nogueira wouldn’t take much time off on his quest to get back in the win column, though. He fought just six months after the second loss to Emelianenko. The bout came against 1996 Olympic gold medalist judoka Pawel Nastula. The first-round stoppage was followed by another submission finish eight months later, when Nogueira landed a first-round armbar that forced former professional wrestler Kiyoshi Tamura to tap out just over two minutes into their bout.

The heavyweight standout’s wins over Nastula and Tamura laid the groundwork for his final run in a Pride Grand Prix tournament before exiting the Japanese promotion for what by then were the greener pastures of the UFC. We’ll take a look at Nogueira’s 2006 Pride Openweight Grand Prix performance and his move to the UFC in part seven of this career retrospective.