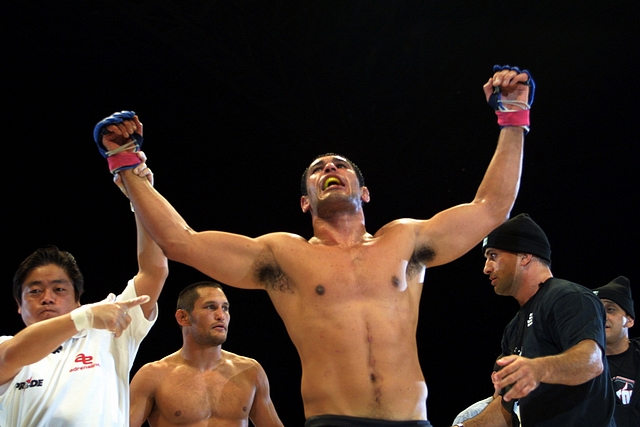 On Sept. 1, one of the true legends of the sport called it a career. With 34 career victories and two major organization’s world titles on his mantle, Antonio Rodrigo “Minotauro” Nogueira left the sport as one of the greatest heavyweight fighters to ever grace the ring and Octagon. With a resume that features wins over some of the greatest heavyweights in MMA, Nogueira is the only fighter in the history of the sport to win a title in both the UFC and Pride Fighting Championships.

Nogueira’s road to the title was not an easy one. He was just 10 years old when he was hit by a truck while at a party with his twin brother, Antonio Rogerio Nogueira.. He had to fight his way through a coma following the near-fatal car accident, which damaged his body and left a permanent scar on the right side of his lower back that would become a trademark of his never-ending resiliency. It was one of the toughest moments in his life. Nogueira couldn’t walk for two months upon his release following an 11-month hospital stay. This was a time in his life when Nogueira developed some of his most important assets — his toughness, heart and the unrelenting will to never give up.

Nogueira won the RINGS: King of Kings tournament in 2001, defeating five fighters on his way to the 32-man tournament title. The RINGS tournament win opened the door for the young Brazilian’s career, a career that started off with strong potential on the back of 11 wins in his 13 bouts before his debut with the once No. 1 promotion in the world, Pride FC. Nogueira made quick work of Gary Goodridge in his Pride debut in July 2001, locking up a triangle submission off of an omoplata attempt just over two minutes into the first frame. The fight was originally scheduled to be against former UFC heavyweight champion and Pride Grand Prix winner Mark Coleman, but that bout was rescheduled for Pride FC 16 in Osaka, Japan, just a few months later.

Coleman was considered one of the best heavyweight fighters at the time, if not the very best. The performance from Nogueira was nearly flawless. The Brazilian took less than six minutes to lock up a submission victory. Minotauro hurt Coleman early with a counter left, sending the former champion wobbling around the ring. Nogueira turned up the intensity, pushing forward and landing punches before a slip after an attempted right high kick. Coleman ended up on top of Nogueira, but fell into the Brazilian’s guard, the one place he was looking to avoid. Nogueira trapped Coleman’s right hand and passed his leg over Coleman’s shoulder to lock up the triangle choke. Coleman struggled to pull out, but with his face turning purple and no escape in sight, Coleman gave up his arm while attempting to escape. It didn’t take long for Nogueira to extend Coleman’s arm past the point of no return, defeating the top heavyweight fighter in only his second Pride bout.

The performance was one of many legendary fights in the career of Nogueira. Over the course of this multi-part series, we will take a look back at the greatest upsets, comebacks and victories of the Brazilian’s 16-year MMA career. In part two, which will appear on the site tomorrow, we’ll follow Nogueira’s rise to the status of Pride heavyweight champion.