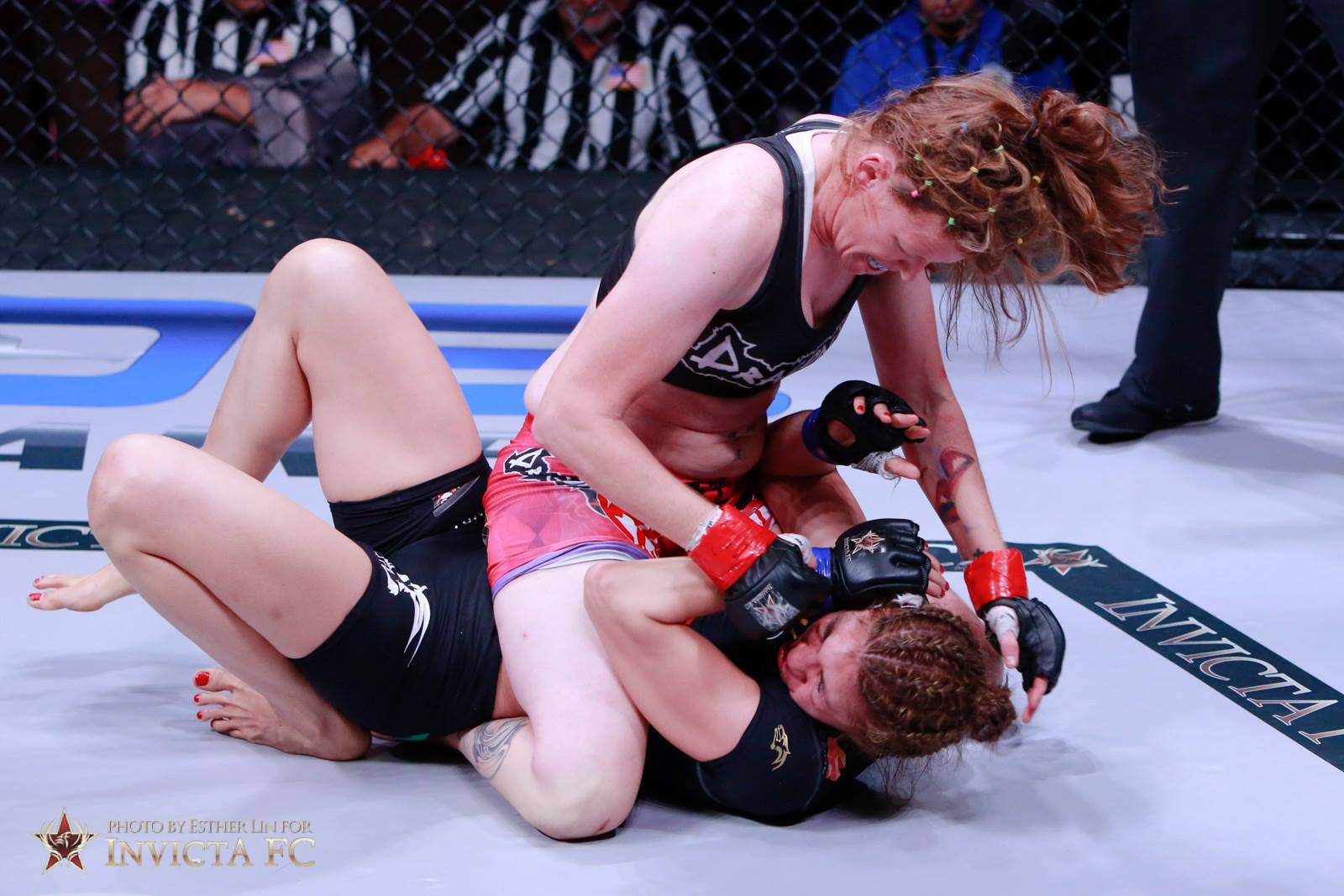 In the night’s main event, bantamweight Tonya Evinger took on unbeaten Swede Pannie Kianzad. The bout was slated to be for Evinger’s 135-pound title, but Kianzad did not make weight. The veteran Evinger earned the 135-pound belt with a fourth-round TKO of Irena Aldana at Invicta FC 13 in July. The win marked Evinger’s fourth straight win inside the Invicta cage, and seventh straight overall. Kianzad made her promotional debut in July and earned a unanimous decision win over Australia’s Jessica-Rose Clark. The 23-year-old held gold under the Cage Warriors banner prior to signing with Invicta earlier in 2015.

The co-main event was strawweight bout between former titleholder Katja Kankaanpää and undefeated fighter DeAnna Bennett. Finland’s Kankaanpää looked to bounce back from her title defeat to Livia Renata Souza in April. Bennett, a former flyweight, made a successful debut in the 115-pound division at Invicta FC 11 with a decision win over Norma Rueda Center.

Tonya Evinger proved why she was the champion of Invicta in the main event Saturday, utterly decimating challenger Pannie Kianzad with a ground-and-pound fiesta. Evinger got takedowns early and often, where she was able to utilize position and ground strikes to soften up Kianzad. She attempted multiple submissions, but Kianzad defended those well. But the constant barrage of strikes forced the referee to intervene in round two.

Drawn Out Bennett Survives Rough Third Round to Score Victory

DeAnna Bennett missed weight for her co-headline bout against Katja Kankaanpaa, but she was able to score the win on Saturday night. Said weight cut looked to affect her cardio, as she got tired very quickly. However, she did enough in the first two rounds that her poor third-round effort mattered not. Post fight, Bennett admitted she had a terrible fight camp which led to her missing weight and not performing up to par. Regardless of the decision and performance, she remains undefeated.

Roxanne Modafferi is proof that a career can always be resurrected, as she continued her recent string of successful fights in dominant fashion over Mariana Morais. She engaged Morais on the feet early, but realized that her ground game was superior. She achieved takedowns with ease and easily worked through the defense of Morais. She eventually ground-and-pounded her to a referee stoppage, sending Morais away with a loss in her Invicta debut.

Lee Pulls Off the Buzzer Beater on Ostovich

Andrea Lee continued to show her development as a top up-and-coming flyweight when she submitted Rachael Ostovich with two seconds remaining in the final round. Lee battered the body throughout the fight, which took the wind out of the sails of Ostovich. However, Ostovich toughed it out for most of the fight and tried to stay in it desperately. However, she was forced to tap in the waning moments, giving Lee the win.

For the first time in many years, veteran Cindy Dandois was able to secure a victory in pro MMA. After a long layoff, Dandois returned to fighting, and despite a loss in her comeback to Tonya Evinger, was able to dominate Megan Anderson on the mat. She successfully grounded Anderson on multiple attempts and looked for submissions in succession. Eventually, she was able to slap on a triangle choke that forced Anderson to surrender in the second round.

Two of the strawweight division’s best prospects squared off in Jamie Moyle and Sharon Jacobson, and the fight did not disappoint. It was a razor-close fight, despite the scorecards, two of which gave Jacobson a sweep. Jacobson’s wrestling and size proved to be the difference maker, as she was able to push forward, force clinch and put her weight on Moyle. It was Moyle’s first loss, while Jacobson moves closer to the Invicta title picture.

Frey Tops McCarthy in a Slugfest

Many expected Jinh Yu Frey and Liz McCarty to compete for Fight of the Night and they did not disappoint. In a slugfest contested on the feet for the most part, Frey and McCarthy were aggressive and threw many violent strikes. However, it was Frey that landed with more volume and power. She also mixed in the occasional takedown to take a unanimous nod on the judge’s scorecard.

It was quick, but it sure wasn’t painless for Rosa Acevedo, as she was finished via TKO in the first round against J.J. Aldrich. Acevedo, who took the fight on short notice, was aggressive early, but soon found herself in over her head. Aldrich battered her in the clinch and put a vicious knee into her opponents liver, which had Acevedo crumple to the mat. Some follow-up shots later, the ref stepped in to stop it and awarded Aldrich with the TKO victory.

Aspen Ladd is only 20 years old, but she fights like she has all the experience in the world. From the get-go, she pushed forward and put her weight on Amanda Bobby Cooper. Once Ladd was able to secure the takedown, she completely dominated. In the second round, she switched between back mount, full mount and submission attempts to open up opportunities on Cooper. After softening her up with vicious ground strikes, Ladd fetched an arm and was able to secure the tapout before the second round was over. Ladd remains undefeated and proved that she is truly a blue chip prospect.

Felicia Spencer opened up the card with a one-sided drubbing of Rachel Wiley. Both women were making their pro debuts, but it was evident that Spencer was the superior athlete. She pushed forward early and landed punches and elbows from the clinch. Once she got the takedown, it was evident that this fight was hers for the taking. She advanced position, landed numerous unanswered strikes and forced the referee to halt the bout before the first bell could sound.