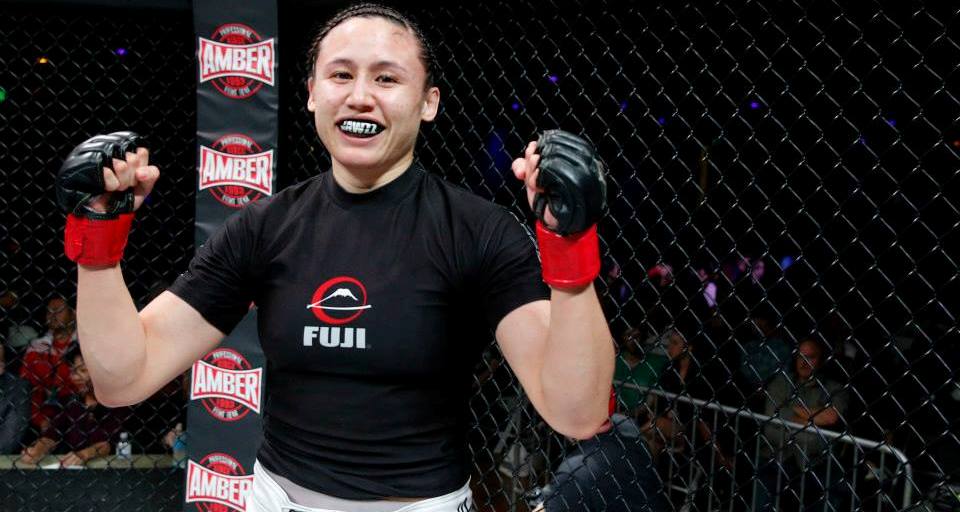 As women’s MMA has exploded in recent times, we have seen a number of women make a name for themselves. From Ronda Rousey to Joanna Jędrzejczyk, a number of women have put their name on the map and become stars.

There are still a number of other female fighters waiting in the wings for their turn at stardom. One of these fighters is rapidly ascending strawweight Jamie Moyle, an undefeated pro who recently made the jump from the amateur ranks.

It was a quick jump for Moyle. After winning an amateur tournament to earn an Invicta contract, she quickly made her pro debut. In her mind, a lot has changed in that time.

“My mind state for a fight has improved,” Moyle told Combat Press. “I am going in there to dominate and make a statement.”

When Moyle, a Syndicate MMA representative who has been with the gym for over two years, took her pro debut with Invicta, she didn’t know what to expect. Moyle’s performance was stellar, though. She completely outclassed veteran Jenny Liou Shriver and never found herself in trouble. She beat Shriver up, earning a lopsided decision and some new fans in the process.

“I wasn’t sure what to expect in terms of publicity,” said Moyle. “I wanted to make a statement so I could get bigger and better fights. It was pretty cool, because I got good exposure, which reflected in the feedback on social media.”

Moyle then made a quick turnaround in the form of a bout with JJ Aldrich. Aldrich, like Moyle, had recently made her pro debut and scored a win in dominating fashion.

The fight between Moyle and Aldrich was a match that MMA experts had pegged as a collision of top prospects. Both women were 1-0, had shown great skill sets and were viewed as potential blue-chip prospects. However, only one could win and continue to hold the moniker of top prospect. That one lady turned out to be Moyle. She picked up the victory in a quick, convincing performance where she showed that she’s not only a striker, but a good grappler as well.

“[Aldrich] and I were in the same position, so one of us was going to lose and the other was going to continue to be a rising star,” explained Moyle. “I wanted to go in there and finish her as quickly as possible, especially since a lot of UFC people were there to watch.”

Moving forward, Moyle now has another huge test in the form of Amy Montenegro. The pair meet at Invicta FC 13, which takes place on Thursday. Montenegro is a fellow prospect, though she has more than double the pro fights of Moyle.

“I haven’t seen a whole lot from Amy, but I have really good striking and I think I will outstrike her,” Moyle said. “She’ll probably try to clinch with me and take me down, but I’ll be ready for that. I am going for the first-round knockout.”

In the short term, a victory is the goal for Moyle. Montenegro is a solid name to add to her resume, which is already impressive this early into her career.

Moyle has goals that she wants to accomplish by the end of the year. With gold on her mind and a move to the world’s biggest organization, it’s safe to say that Moyle knows exactly what she wants.

“I’d like to be as active as possible. I want at least one more fight before a title fight at the end of the year. That way, I could transition to the UFC by early next year.”