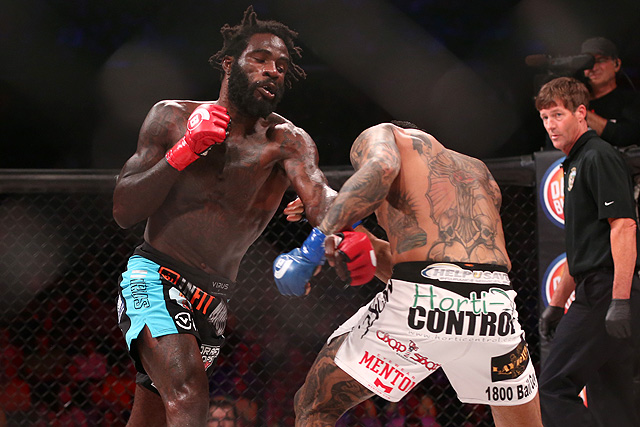 Daniel Straus took some tips from fellow Bellator fighter Muhammed “King Mo” Lawal and had a clear message for anyone in the 145-pound division following his Bellator 138 victory over Henry Corrales.

Straus spoke with Bellator commentator Jimmy Smith in the cage and reiterated the same message in the post-fight press conference as well: “If you’re in the ’45 division, I’m coming to beat that ass.”

Straus walked the walk along with talking the talk at Bellator 138. A pre-fight hype video shown before his contest with Corrales featured quite a few bleeps, something we haven’t seen a lot of from Straus during his time in Bellator. He’s always been a good fighter, but he still flew a bit under the radar with many fans. That all changed thanks to a conversation he had with King Mo, who told Straus he needed to talk a little more.

Straus is a man who doesn’t look to rub anyone the wrong way or disrespect his fellow fighters, a trait that’s likely held him back in terms of promoting his own fights. But after speaking with King Mo, it would appear as though Straus has finally figured out the value of self-promotion.

“King Mo told me and I realize there are ways to be vocal without disrespecting anyone,” Straus said. “You can open your mouth and say what you want, what you need, without hurting anybody’s feelings or being rude. And that’s what I’m about. I’m not trying to be rude or disrespectful.”

At the same time, however, Straus made sure to let everyone know that while he may be respectful on the microphone, don’t expect such kindness once the cage door closes.

Straus was full of great lines when speaking to the media, including an “eloquent” retort to a media member’s question asking Straus if he wants to fight for the belt in his next fight. Straus has delivered some fast one-liners back to media members before, and in the midst of talking about his current MMA career, Straus explained his feelings on some of the questions he has received.

I brought up the idea of MMA journalists and their knowledge (or lack thereof) of the intricacies of the sport. While nearly everyone has played some semblance of a sport while growing up, very few have set foot in a MMA gym. Even fewer have stepped into the cage. It’s a critique that fighters will sometimes throw back at media members who they claim have no idea about what they’re discussing.

I think it can help. You know, I can watch football all day, but I can’t go out there and commentate on something that’s not of knowledge to me. That’s where you get the ridiculous questions like, ‘Did you train hard for this fight?’ So I definitely think it could help — not just MMA journalists, but even coaches, judges and referees. It helps everyone [to] have that knowledge of the sport.

Kimbo Slice may have been the name on the marquee at Bellator 138, but Straus arguably stole the show with his speeches. For his part, Patricio “Pitbull” Freire, who was sitting only a few chairs away at the post-fight press conference, told Straus that “if he wants the belt, he knows where to find him.” With both guys seemingly on board for another bout and Straus seemingly able to carry his weight in terms of promoting, it appears as though Bellator President Scott Coker has his next featherweight title bout all wrapped up.