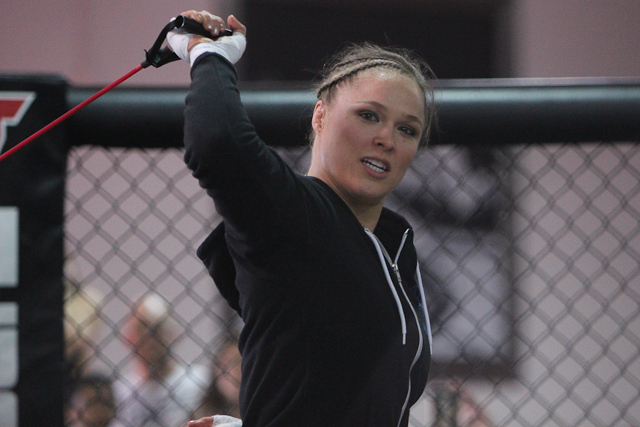 When it comes to the topic of discussion of the greatest of all time in mixed martial arts, there are a few names that commonly get thrown into the mix. Anderson “The Spider” Silva. Fedor “The Last Emperor” Emelianenko. Georges “Rush” St-Pierre. However, with St-Pierre and Emelianenko no longer active and Silva’s controversial return marred by his performance-enhancing drug use, the discussion would seem to lack an active fighter who can still be considered a pure and “clean” competitor. However, that’s not entirely true. Who else, among today’s active mixed martial artists, could fit into this category? The answer is clear: “Rowdy” Ronda Rousey.

Let’s be honest. Comparing each fighter within his time is like comparing Jack Nicholson’s portrayal of the Joker to Heath Ledger’s version of the famed DC Comics icon. These were two completely different characters even though the actors were playing the same part.

Emelianenko defeated some of the top mixed martial artists in his reign. The list of victims includes Andre Arlovski, Ricardo Arona, Renato “Babalu” Sobral, Kevin Randleman, Antonio Rodrigo Nogueira, Mirko “Cro Cop” Filipovic, Mark Hunt, Mark Coleman, Tim Sylvia and Brett Rogers. A lot of Emelianenko’s other fights were against guys who weren’t even ranked. He managed to amass a 31-1 (1) record, though, which included a 25-fight winning streak. Then, he ran into a Fabricio Werdum triangle, a barrage from Antonio “Bigfoot” Silva and an “H-Bomb” from Dan Henderson. Three losses in a row for the greatest of all time seemed to tarnish his status in the eyes of many fans. Emelianenko would go on to defeat Jeff Monson and Pedro Rizzo in 2011-12 and finally hang up his gloves.

St-Pierre proved time and time again why he belongs in the mix. The former welterweight champion amassed an impressive 25-2 record, avenging his losses to Matt Serra and Matt Hughes, respectively. “Rush” systematically outclassed Hughes twice, and he also topped Thiago Alves, Josh Koscheck (twice), Jake Shields, Nick Diaz, Carlos Condit and B.J. Penn, to name a few. GSP took on arguably the toughest test of his five-plus years at the top when he met Johny Hendricks at UFC 167 in November 2013. St-Pierre won a controversial split decision and then walked away from the sport shortly after, vacating his crown and leaving with his legacy intact.

Then, there’s Anderson Silva. What can really be said about the former UFC middleweight champion that hasn’t not already been discussed? He reigned as the middleweight king for more than six years. Silva defeated 16 men over the course of his reign, including defeating three fighters in the weight class above his own. His victims included Rich Franklin (twice), Yushin Okami, Vitor Belfort, Chael Sonnen (twice) and Dan Henderson. Silva systematically made each and every one of his opponents look inferior and amateur at best. The best fight of his career had to be his first fight with Sonnen at UFC 117. Here Silva was, being called the greatest of all time, and yet he was being beaten and beaten badly. With less than two minutes left, though, Silva showed true championship heart and snatched a triangle/armbar combination and forced Sonnen to tap. And who could forget his front-kick knockout of Belfort? It would take nearly seven years until a challenger — a man named Chris Weidman — would arise and be able to remove the belt from his waist.

Why does Rousey belong in this group? Simply put, it’s because she is something the MMA world has never seen before. Never before has a fighter, male or female, rolled through the competition as she has. She has taken on top-10 opponents in every title fight she has had. She has only gone past the first round once, against Miesha Tate back at UFC 168 in December 2013. She has made opponents look like they do not even belong in the Octagon.

Rousey’s first seven fights ended in first-round armbar. Her only real adversity came against Liz Carmouche at UFC 157. When fans watched her rematch with Tate, they saw her stay in control and work for the armbar in the third round after Tate made multiple escapes. Rousey’s next two fights didn’t even last a combined two full minutes, as she dispatched Sara McMann with some brutal body shots and took out Alexis Davis in just 16 seconds flat. Just last weekend, “Rowdy” dispatched of No. 1 contender Cat Zingano in a mere 14 seconds. That means that Rousey’s last three title fights have lasted a combined 96 seconds.

Rousey has entered into every fight with the UFC’s promotional machine pushing her challenger as the toughest test yet for her. Instead, she has made it look easier and easier each time she steps into the Octagon. Take into consideration that no other candidate for the greatest of all time has had to face the top-level competition that Rousey has seen.

In defense of those other fighters, Rousey has had competition readily available. Fedor had some questionable opponents in his reign at the top, often facing mismatched opponents — his fight with Zuluzinho is a perfect example. St-Pierre fought Nick Diaz after Diaz had just lost an interim title fight and yet still got a title shot. St-Pierre himself took on less than deserving competition in the form of Dan Hardy and Penn, a fighter who predominately fought at least one weight class lower. Silva fought three fights at light heavyweight against the likes of Forrest Griffin, Stephan Bonnar and James Irvin. Yes, they were a weight class bigger, but Silva finished all three in the first round. Silva also was matched against fleeting top-10 competitors in the form of Thales Leites, and current welterweights Demian Maia and Patrick Cote. Emelianenko, St-Pierre and Silva were constantly being matched up against opposition that wasn’t necessarily relevant, but available.

Rousey is thriving in an environment where she has had a steady stream of worthy challengers. They may not be the most recognizable names, but they are contenders nonetheless. In addition, unlike Fedor and Silva, Rousey has yet to be defeated. GSP did leave with a victory, but even he was defeated twice in his career. At this point, Rousey has spent as much time in the cage in 11 fights as a single five-round championship fight.

Has Rousey done enough to be considered one of the greatest of all time? Yes. She may not have the 25-plus fight resumes of those other fighters in the G.O.A.T. debate, but she has the talent to not have to fight as much and yet still be an unstoppable force in not just the women’s division, but in all of MMA.