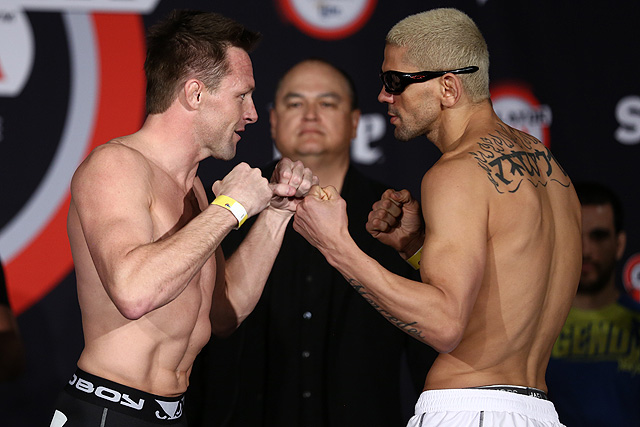 On Thursday, March 26, Bellator MMA hosted the weigh-ins for its 135th event which takes place Friday, March 27, from the Winstar World Casino in Thackerville, Okla.

The event will be headlined by a bantamweight title fight between champion Joe Warren and challenger Marcos Galvao. The pair met previously at Bellator 41 in 2011. That night, Warren, who held the featherweight title, took a controversial decision win. Since then, however, Warren has officially moved to 135 pounds and unified the bantamweight belt by defeating Galvao’s pupil Eduardo Dantas in October. Galvao, meanwhile, enters the contest riding a three-fight winning streak. His last loss came against the aforementioned Dantas via knockout.

The main card also features a number of notable names. Former WEC fighter L.C. Davis looks to establish himself as the No. 1 contender for the bantamweight belt as he clashes with Japan’s Hideo Tokoro. Middleweight Francis Carmont makes his promotional debut as he takes on Brazilian Guilherme Viana. Finally, UFC and Strikeforce alum Ryan Couture locks horns with TUF: Live and RFA veteran Dakota Cochrane.

The event kicks off Friday with a preliminary card stream on Spike.com at 6:30 p.m. ET. The four-fight main card follows at 9 p.m ET on Spike.