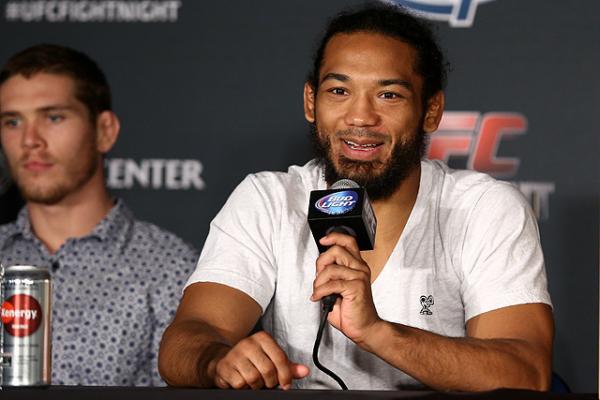 On Saturday, Feb. 14, the UFC will host UFC Fight Night 60: Henderson vs. Thatch from the 1STBank Center in Broomfield, Colo.

In the night’s main event, former WEC and UFC lightweight champion Benson Henderson will move up to welterweight to take on the red-hot Brandon Thatch. Henderson was called into action after Thatch’s original opponent, Stephen Thompson, pulled out due to injury. The 31-year-old Henderson is aiming to snap the first losing streak of his career. Thatch, meanwhile, rides a five-year, 10-fight winning streak into the fight. The Colorado native has finished all 11 of his wins inside the first round, including his two UFC appearances against Paulo Thiago and Justin Edwards.

The co-main event features a featherweight clash between Hawaii’s Max Holloway and TUF alum Cole Miller. The 23-year-old Holloway has reeled off four straight entering the contest, while Miller has won three of his last four bouts inside the Octagon.

Above is live video of the event’s post-fight press conference which kicks off approximately 30 minutes after the main event between Henderson and Thatch comes to a close (courtesy of the UFC).