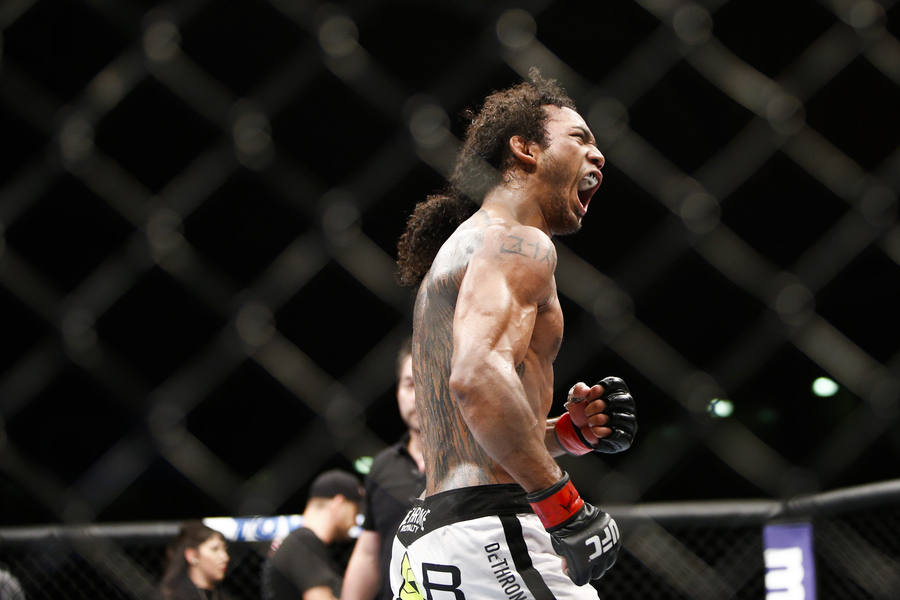 Former lightweight champion Benson Henderson survived the early storm in his welterweight debut, submitting the favored Brandon Thatch in round four. Thatch came out with heavy forward pressure, forcing Henderson to stay near the fence. Henderson showcased his speed advantage, scoring with shots to the body, but Thatch seemed unfazed early. Round two was a big one for Thatch, as he repeatedly delivered combinations. The tide of the fight changed in round three as Henderson worked hard for a takedown and put Thatch on the ground. He took Thatch’s back and worked for a rear-naked choke. An armbar attempt allowed Thatch to escape and see a fourth round. Thatch appeared to take back momentum with strikes, but Henderson ducked under for a takedown and again took the back of Thatch. Once there, Henderson slapped on a rear-naked choke and ended the fight.

Max Holloway extended his winning streak to five with a hard-fought decision win over fellow featherweight Cole Miller. The Hawaiian struggled to find his range early as he was forced to navigate Miller’s reach advantage. Miller tried to pull guard and fished for a kneebar, but Holloway escaped. Holloway opened up in round two, pressuring Miller with punches and kicks. An accidental clash of heads opened a large cut over the left eye of Miller. Holloway increased his output in the final round, repeatedly scoring with combinations. There was little doubt when the final bell sounded, as Holloway earned the unanimous nod.

Welterweight Neil Magny earned his sixth straight win with a third-round submission win over Kiichi Kunimoto. Magny used his reach early before initiating the clinch and scoring with knees. In round two, Kunimoto earned the top position, but Magny remained calm and worked back to his feet. Once there, he battered Kunimoto and earned a takedown. He looked to finished, but the round expired. The final round saw Magny earn a quick takedown and take the Japanese fighter’s back. Magny softened up Kunimoto with punches before sinking in the fight-finishing rear-naked choke.

TUF alums Daniel Kelly and Patrick Walsh traded single shots on the feet for 15 minutes, with the Australian Kelly earning a unanimous decision win. Kelly wobbled Walsh early, but did not capitalize and Walsh ended the round with a brief takedown. Kelly increased the output of his jab in the middle frame. The final stanza drew heavy boos from the crowd, as Kelly did enough to earn the victory.

In a grueling lightweight fight, Kevin Lee edged out Brazil’s Michel Prazeres by decision. Prazeres connected early and scored a takedown, but he couldn’t keep Lee down. Lee used his reach advantage to turn the tide. Prazeres gassed badly in the final two rounds as Lee was able to earn takedowns at will. Lee looked to finish in the final minute of the find, but Prazeres survived. The judges at cageside rewarded Lee for his efforts.

Flyweight Ray Borg made a statement in the first main card bout, submitting Chris Kelades in the third round. Borg quickly established his ground prowess, putting Kelades on his back. He worked to mount late in the round and attacked with arm-triangle, but the bell saved Kelades. In round two, Borg worked to take Kelades’ back and then threatened with a D’arce, but Kelades survived. Borg changed his approach in round three, isolating the left arm of Kelades and coercing a tap via kimura.

TUF 8 winner Efrain Escudero dominated Rodrigo de Lima from the opening bell, earning a lopsided decision win. Escudero’s striking advantage was evident throughout, as he repeatedly connected with heavy shots. De Lima survived and briefly took the back of Escudero, but it was short lived. Escudero increased his output in the second round, battering de Lima with punches. The Brazilian earned a takedown in round three, but Escudero escaped and landed on top, delivering more punishment to seal the win.

Featherweights Chas Skelly and Jim Alers went to war, with Skelly earning a second-round TKO by strikes. The pair traded shots early, with Alers catching a kick and ending up on top. He attacked with an ankle lock, but Skelly escaped and went for a leg lock of his own. In round two, Skelly landed a big shot that wobbled Alers. Skelly looked for a takedown, allowing Alers to recover. However, late in the round, Skelly rocked Alers and finished with an illegal knee, but the referee waived off the fight.

In a battle of ranked flyweights, Zach Makovsky used well-timed takedowns to get the better of Tim Elliott and claim a unanimous decision win. Elliott came out reckless, but that allowed Makovsky to capitalize and bring the fight to the ground. Elliott repeatedly looked for guillotine chokes, but Makovsky was able to escape. Makovsky took Elliott’s back and threatened with a rear-naked choke, but Elliott nearly turned the tide with a big slam. When it was all said and done, the judges rewarded Makovsky for his superior wrestling.

James Moontasri spoiled the debut of Cody Pfister, scoring a second-round submission. The taekwondo stylist Moontasri battered the body of Pfister in the opening round with knees and kicks and as Pfister looked for takedowns. In the seconds stanza, Moontasri took the back of Pfister and locked in the fight-finishing choke.