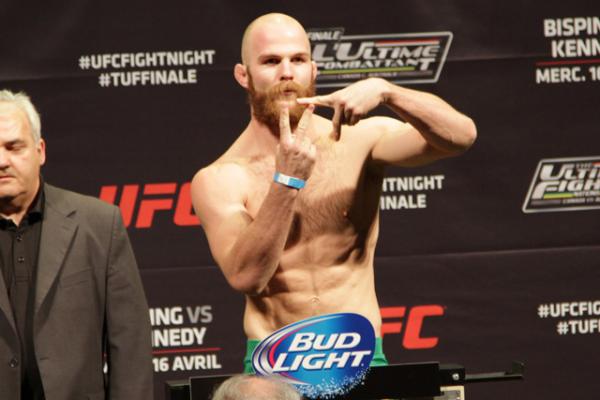 Those are the famous words from the hit motion picture The Waterboy. In the movie, it was all about overcoming the mind. It was all about facing fears and proving the doubters wrong. While Bobby Boucher, played by Adam Sandler, may have used some, um, interesting techniques to help with his attack, he showed everybody that with the right attitude and an end goal in mind, anything is possible. A kid who carried water for the team became a star quarterback, all because he saw what he wanted and took it.

For UFC’s Richard Walsh, it’s not quite that easy. The script isn’t pre-written for him. Nobody knows how his next foray into the Octagon is going to end. However, leading up to his first bout of 2015, he had to do some visualizing of his own. His visions were all about a set of goals. On Feb. 28, at UFC 184, the time to visualize will end and the time to attack will arrive.

“I had a picture from my last fight and I just wrote some goals on it,” Walsh told Combat Press. “One of them was, for 2015, to have three fights with three wins, and fighting on a UFC main card was my goal. A week later, they rang me up and asked if I wanted to fight on UFC 184 and I was like, ‘Yes!’ I never thought my fight would be on the main card — there were like five or six big names on there.”

Some fighters will work their whole careers without ever being featured on the main card of a UFC pay-per-view that also features one of the sport’s most marketable athletes. Walsh gets that opportunity when he shares the main card of UFC 184 with women’s bantamweight champion Ronda Rousey.

“It’s gonna be good to be on a card with some big superstars,” Walsh admitted. “It’s just gonna be good to be on there and be a part of it. I wanna enjoy it. It’s a good opportunity for me to make a mark. There’s gonna be a lot of people watching it, but the pressure’s the same whether you are fighting in a UFC in some random town or a big one in Las Vegas or L.A. on pay-per-view. There’s still pressure, so being given the opportunity to fight on a big one is great.”

In his last bout inside the Octagon, Walsh was on the wrong end of an unlucky split decision that saw Kiichi Kunimoto edge out a win in his home country. Any loss is a tough blow to a fighter, but Walsh’s defeat in Japan stung a little bit more.

“As far as the fight goes, yeah, it was a little bit disappointing,” Walsh admitted. “I didn’t realize how hard it would be afterwards. I mean, obviously losing sucks, and I’m a competitor and I wanna win and I walked out thinking I won. That’s just how it goes sometimes in the sport, though. You can’t always be in the judges’ or referees’ heads. You’ve just kinda gotta roll with it.

“What did suck was not getting paid [laughs], so I’ve had to be working just to get enough money to train for this fight. You think about, if someone is getting eight [thousand to show] and eight [thousand to win] and they didn’t win, that’s eight grand that they got for losing, plus the 20 percent that they pay their coaches or manager, so you’re looking at maybe six and a half grand. And then for me, I spent a bit of time in Japan after the fight, so there’s a couple of grand there. So I’m coming back with maybe five or so grand, not to mention I spent fuckloads on my camp. I spent more than I made, that’s for sure.

“At the end of the day, though, I’m not doing it for the money. I’m doing it because I like it. Everything you are doing now is an investment. Whether you are running at a loss or not, it’s still a win in your career and where you want to be. It helps at the time to have that little bit more money behind you. With guys who do, that learning curve can be exponential. You can afford to sleep in, rest, have good supplements, pay good training partners to come in and just focus on MMA.”

It may not seem like a lot of money, but any little bit extra will help an up-and-coming fighter as they enter their camp. Fighting and training full-time on the lower tier of the company pay scale can be arduous. In Walsh’s eyes, there’s an easy fix.

“I guess it all comes back to media opportunities,” Walsh admitted. “Not getting that coverage means there’s less chances of sponsorships. The sport is growing and we need to get people behind it like they do in other countries. Maybe we need a Conor McGregor. Maybe we need companies to get behind [the sport], or whether it’s the cage ban in Victoria [or] whatever it is, something needs to give so the Aussie guys can improve a little bit quicker.”

Heading into his main-card tilt at UFC 184, Walsh, who fights fellow welterweight Alan Jouban, isn’t getting too far ahead of himself. He is set for the biggest fight of his career and he’s not planning to get too worked up on what his opponent may or may not do inside the cage. Instead, there’s just one focus for Walsh. It’s a pretty common focus for any fighter, really. He just wants the win.

“I don’t really watch my opponents too much,” Walsh revealed. “I may watch them once just to have a look, but I leave all that up to my coaches. I don’t know that much about him. I know that he has a lot of heart, apparently, and he is a southpaw. And it’s just gonna be a good, tough fight. I always think that if you’re gonna do a fight, it may as well be a tough one.”