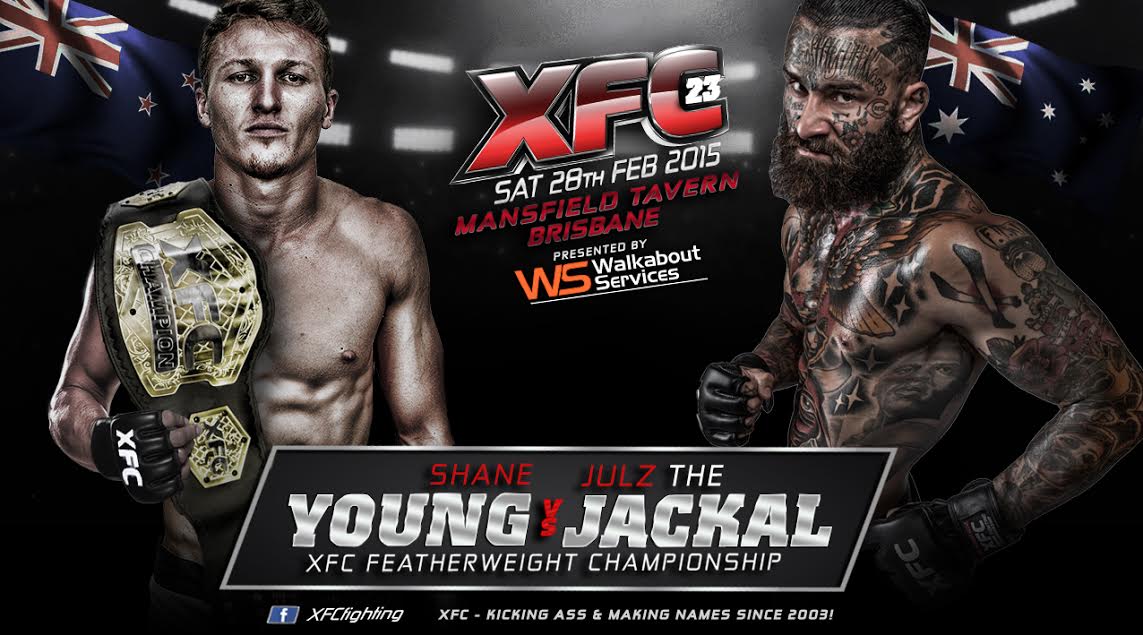 The heavily anticipated XFC debut of Julian “Julz the Jackal” Rabaud has been set.

The promotion has confirmed with Combat Press that Rabaud is set to meet New Zealand’s Shane Young for the XFC featherweight title at XFC 23 on Feb. 28, 2015, at Mansfield Tavern in Brisbane, Australia.

Rabaud, a former bantamweight champion with Nitro, signed an exclusive three-fight deal with XFC earlier this year. This is set to be Rabaud’s debut at featherweight.

Some might find it surprising that the very first fight of Rabaud’s contract is a title fight. The fighter himself is not among that group.

“To be honest with you, it is no surprise to me no more. I mean, I’m very grateful I have been given this fight on my debut, but I made it happen,” Rabaud exclaimed to Combat Press. “I make everything happen, good or bad, it’s because of actions and my strong beliefs. I make my dreams reality, and showing that is as simple as getting this fight. I told everyone I would, and I did. I’m going to be the champ. I will be the XFC champ at 145 [pounds]. Not only does the big man [XFC promoter Justin Lawrence] think I am the best for that job, but my opponent accepts me as the best too, because I know he wanted me—not as bad as I want him, but he wants me. But I’ll tell ya what, nobody wants this more than me, no matter. Not now.

“I think whooping Young’s ass will do me good. It will get him out of my way, out of my sight and out of the country of the educated, putting the next guy in front of me so I can get on with bigger dreams. I want to get on that Australian UFC card, and the hard work and positivity that is around me right now is enough to make that happen. I’m confident in that. I’m ready for that and I will be eligible for that by time I jam Young. I’m going to fill that arena and I am going to put on a main-event show. I’m going to make some noise, make some people upset, close some mouths and open some more and then walk away with a well-overdue and well-deserved win. My team are top-of-the-line standard. I have top-of-the-line work ethic, support and hunger to do it. There is nothing stopping my outcome. There is nothing stopping me from winning this fight.

“Impact is what I do. I make a bigger impact on my losses than most others do on the wins. So walking away with another belt will create some impact, yeah. I’m going to show the non-believers how powerful my words are. Following up on this is my only living reason. I am back. And I told them I will be better than ever, and I am. I can’t wait to show the world what I have developed with nothing but belief and hard work. I have made changes people can’t make in the time frame I made them in. Once again, I make shit happen. February 28, I will shock many. Young will feel it firsthand.”

Young, who has one career defeat on his extensive combat-sport record, won the XFC featherweight title at XFC 22 when he defeated Adrian Rodriguez by way of TKO in the third round. This fight will mark the third time that Young has appeared under the XFC banner, and a successful title defense is sure to bring attention to the 21-year-old.

“I wanted the fight straight away because I wasn’t happy with my performance against Rodriguez and [Rabaud] is the perfect opponent for me to put on a showcase,” Young admitted to Combat Press. “He must know it isn’t the fight he wants, coming off a quick KO loss in the division below, a year since he had a fight, against the champion. Good fight for me; bad night for him. I see another first-round KO coming to him via my fists and feet on February 28.”

When Young defeated Rodriguez, it not only gave him the featherweight championship but helped him gain some redemption from their previous bout, which saw Rodriguez edge Young via split decision.

“I was more satisfied with avenging the only ‘loss’ of my entire combat sports career,” Young admitted. “But I have to say, it was a fun walk through the airport. It was my third fight since XFC 20 and my third knockout this year, [and a] great way to cap off the year.

“I feel like I’ve taken it back for all the [New Zealand] fighters that came before me [who were] put there to buff up Australian fighters records. I wasn’t meant to win that belt, but I took it away—the first Kiwi to do so for almost a decade. This belt belongs to New Zealand now, and I’ll fight tooth and nail to keep it here. It’s just the beginning for me. I’m hungrier than ever because now I’m not defending my record, I’m defending my title, my belt. Nothing much else has changed, but beating Julz in a fantastic fashion will elevate my career. Next year is the year I take over.”

The Feb. 28 event is also set to feature the opening rounds of the XFC women’s flyweight tournament, with New Zealanders Kate Da Silva and Hera Tamati facing off with Terissa Wall and Jaz Walker respectively.

Da Silva, a Brazilian Jiu-Jitsu black belt, is making her return to the XFC on the back of her XFC 21 loss to Jessica “Jessy Jess” Rose Clark, who was recently signed to Invicta Fighting Championships. Prior to that fight, Da Silva won the Princesses of Pain one-night tournament and also competed in the Storm Damage one-night women’s gauntlet.

Tickets for the event are available from the promotion, and inquiries can be sent through email (info@XFCfighting.com) or over via telephone 0432 277 709.