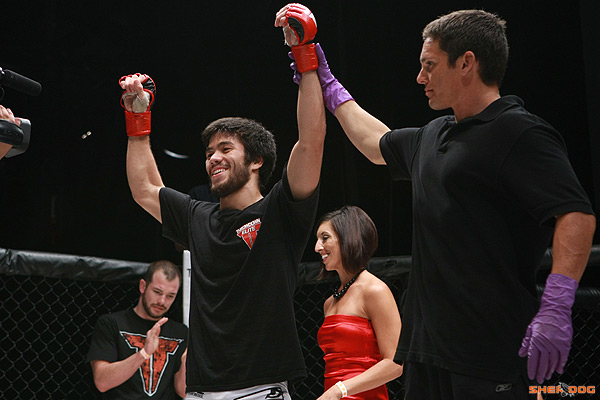 Walking through the doors of the gym, there’s an air of prestige. World champions train side by side. World-class coaches push their students to be the absolute best. It’s all about having the best platform to develop. Fighting is about winning. That’s no secret. Martial arts is different, though. It’s about learning.

As the class begins to wind down, the hearts of the students are racing. They’re excited. The adrenalin is running high. They’ve been put to the test each and every day. The world champions in the room are here to help each other. They are here to develop tomorrow’s superstars.

Anybody can fight. The art form behind the fight, though, takes years of mastering. Yet that’s exactly what can take a prospect and turn them into a star. Mark Striegl stands in that room. He has found what he believes will take him to the next level of his career. He has found a place that will help him strive for greatness.

“It’s no secret about how deep the Evolve talent pool is,” Striegl confessed to Combat Press. “They have some of the very best trainers and fighters in the world. Training here will do wonders for my development. The tryouts were intense. I won’t get into specifics, but it was definitely difficult.”

Striegl began fighting professionally in 2009 when he was just 21 years old. He may be a veteran of 14 fights, but his career is still in its early stages. Now that he has the chance to train alongside some of the best fighters in the world and a number of world-class coaches all under the one roof, his career can only progress from here.

“Joining Evolve can definitely be career-changing,” Striegl admitted. “I’m excited, and I’d like to thank Chatri Sityodtong and Heath Sims for the opportunity.”

Making a plunge into the journey that is mixed martial arts isn’t an easy thing to do. Sometimes it comes naturally, after progressing through the various traditional martial arts that are practiced all around the world. Other times, it can be a matter of being influenced by those around us.

“When I was younger, my older brother Frank introduced me to wrestling,” Striegl recalled. “Naturally, being the younger brother, I followed in his footsteps and copied him. When I got older, I started watching MMA and I became a fan. After graduating from high school, I decided to give it a try at a local gym in Tokyo—Wajutsu Keishukai—and I was hooked immediately.”

Attempting to follow in his brother’s footsteps, Striegl has competed all over Asia, with stints in some of the biggest promotions of the region. The next most likely move in his career would be to tackle the best fighters in the world with either a ONE FC or UFC contract. Either way, he’d be happy.

“I never thought it would lead me to where I am now,” Striegl admitted. “Mixed martial arts is a journey full of ups and downs. I try to take everything one day at a time.”

In 2012, Striegl strung together six straight wins, all by way of submission. He hasn’t competed too much over the last two years, however, with just two fights total throughout 2013 and 2014. He suffered his first professional loss during that stretch before bouncing back with another first-round submission victory. Impressively, 11 of his 13 career wins have come by way of submission, with the 26-year-old only seeing the judges’ scorecards twice. Now, with his relocation to Singapore, Striegl looks to what lies ahead.

“I feel that I was a little quiet this year, but [I] plan to make 2015 huge,” Striegl exclaimed. “This is very important to me. MMA is my passion and career. I’ve invested so much into this sport, and I do believe that this is a once-in-a-lifetime opportunity at Evolve.”