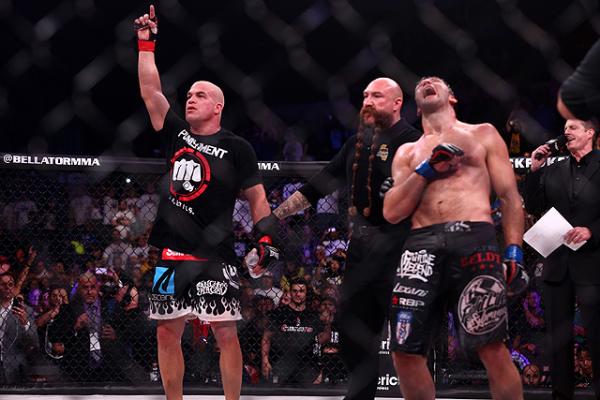 Bellator 131, featuring Tito Ortiz’s victory over Stephan Bonnar in a hyped battle of two names from UFC’s glory days, was a tremendous success, drawing an average of 1,241,299 viewers on Spike TV on Saturday night. It was a record for Bellator.

The Ortiz-Bonnar fight took place from 11:50 p.m. ET to 12:16 a.m. ET and averaged 1.9 million viewers, peaking at 2 million. It was the most watched MMA fight on cable television this year. It also ranked as the second highest rated MMA fight among men ages 18-35 and men 18-49 on either broadcast or cable television during 2014 and ranked second in its timeslot among all cable channels among men 18-34 and men 18-49.

“Bellator 131 was an incredible event that had something for everybody, and I’m thrilled to see our efforts were so well-received by our fans,” said Scott Coker, Bellator CEO, in a press release issued by the promotion. “I’m very proud of our entire Bellator and Spike family for all of the hard work they put resulting in these record-breaking ratings. The most exciting thing for me is the knowledge that we are just getting started, and I can’t wait for everyone to see what we have in store for the future.”

The first hour, from 9-10 p.m. ET, drew 994,000 viewers. That hour included the Muhammed “King Mo” Lawal vs. Joe Vedepo and Mike Richman vs. Nam Phan fights. The next two hours drew 1.3 million viewers and included the Joe Schilling vs. Melvin Manhoef and Will Brooks vs. Michael Chandler fights, as well as a tape-delay replay of a prelim bout between A.J. Matthews and Kyle Bolt.

The prelims featured four fights. Two of those fights were between the finalists of The Ultimate Fighter: Latin America series, which wasn’t broadcast in the United States except on UFC Fight Pass. Of the eight fighters who competed on the UFC 180 prelims, only two, Jessica Eye and Leslie Smith, had fought in the UFC before and only one, Smith, had a win on record.

With so many unknowns in the UFC competing on the prelims and with the heavy competition from Bellator and also the World Series of Fighting, a below-average rating for the UFC 180 prelims was expected. That the ratings didn’t completely bottom out actually can be seen as somewhat of a success, as although they were below average, all things considered they were still in the range of what UFC pay-per-view prelims on Fox Sports 1 typically draw.

Weeks before the show, it was an obvious and silly mistake for the WSOF to run on the same night as a UFC pay-per-view and Bellator’s biggest show of the season. Why the WSOF chose to do so is anyone’s guess. Perhaps it was the only timeslot the company could get from NBC Sports, although that seems unlikely. Maybe the promotion thought all of the added hype of so many big shows on at once would get people switching channels between shows and would give the WSOF show a boost. Instead, people just forgot the WSOF was even airing an event and the show bombed.

Why Bellator 131 was Successful

Bellator 131 was a huge success because it delivered an MMA product that fans were clearly interested in watching. It was the first show that was totally under the direction of new CEO Scott Coker, who was hired by Spike to replace Bjorn Rebney earlier this year. Coker has been in charge of Bellator for a few months now, but he was wrapping up much of what Rebney had planned for the year and this was the first show Coker was able to make his own.

The grudge between the 39-year-old Ortiz and Bonnar, 37, was a total storyline put-on. There may be genuine animosity between the two, but that animosity was cranked up to ridiculous levels in promotion for this fight. Both men were largely portraying caricatures of their past UFC selves with the hope that the excess would draw interest from both the regular Bellator viewership and, more importantly, others who don’t normally tune in to Bellator.

The only question was whether the excessive, pro-wrestling-styled build for the Ortiz-Bonnar fight would actually draw viewers. And going against the prelims for a UFC pay-per-view was not going to make this easy. But it worked.

The rest of Bellator’s show was a feature of style over substance. The production values were among the best of any MMA show ever. People were referring to the show with nicknames like Bellator 2.0, Pride 2.0 and, my personal favorite, Spikeforce. Every fighter who fought live on the main card received a polished, exciting entrance, filled with music, girls in costumes and videos, all themed to their nickname or personality. Fighters cut promos on one another, pro-wrestling style. Everything was hype.

Bellator has to do something different than the UFC. No one on the planet believes Bellator has fighters that are overall good enough to rival the fighters in the UFC, although there are certainly a few talented fighters at the top of Bellator’s ranks. UFC has most of the best fighters in the world, though, and Bellator can’t market itself as presenting the best. Bellator is thus going down the route of style over substance. By marketing the personalities of fighters and presentation of fights rather than the fights themselves, Bellator is marketing itself as a much different product compared to the UFC.

Now the question becomes where Bellator goes from here. Clearly the company has found a formula that works, but it is possible it won’t work for long. The promotion needs to create new stars, which is hard to do because it can’t always rely on former names from the UFC like Ortiz and Bonnar to be around to boost ratings. Bellator does need to continue to utilize former UFC stars, but it needs to do so in a way that gives a marketing push to homegrown Bellator fighters that the promotion is trying to turn into stars.

Bellator is clearly aware of this. The co-main event was a battle between Will Brooks and Michael Chandler for the lightweight title. With Eddie Alvarez in the UFC, Brooks and Chandler are arguably the two biggest homegrown Bellator stars still with the promotion, and 1.3 million viewers tuned in to see Brooks score the biggest win of his career, knocking Chandler out to win the belt. The question now becomes whether all of those extra viewers who watched Brooks score a huge win will continue to tune in to watch him fight again, or if those viewers were just there for the Ortiz-Bonnar main event and will only tune in again for fights featuring former UFC stars.

Bellator also signed Aaron Pico. Pico is considered one of the best MMA prospects in years. He is touted as being a wunderkind of sorts. Bellator hasn’t announced when Pico will debut for the promotion, but he has the potential to be a tremendous star and one of the best fighters in the sport and his signing is a huge coup for Bellator. Of course, potential is no guarantee, but the point is that Bellator is doing everything it can to create new stars.

The most interesting question right now is if Bellator will make a play for Brock Lesnar when Lesnar’s WWE contract expires after WrestleMania in March 2015. There has been tremendous talk about Lesnar returning to the UFC to try to compete once more. Lesnar’s first fight back in the UFC would draw huge numbers, and his subsequent fights with the right opponents could also draw well. But Viacom, the parent company of both Spike TV and Bellator, has massive financial resources and seems to be opening the purse strings to make Bellator a legitimate competitor to the UFC.

There are some who feel that the UFC should steal Bellator’s production style, particularly its fighter entrances. The UFC could easily afford to do this. That it doesn’t is a matter of choice, not lack of resources. It’s generally felt that the UFC believes its audience wants to see fights and does not want to see the excess around fights, such as long entrances, for instance.

The UFC should probably up its production values for its pay-per-view broadcasts. It should probably do this anyway, regardless of what Bellator is doing, because pay-per-views often look and feel the same as C-level Fight Night events that air on Fox Sports 1. As a company, you want people who buy your pay-per-views to feel like they are watching fights featuring competitors who are worth of the price tag. Having pay-per-views that look like lame Fight Night shows doesn’t give your customers that feeling. The UFC probably doesn’t agree, because if it did, it would have upped its pay-per-view production values years ago. But it hasn’t because it is a matter of marketing philosophy for the UFC to focus on the fights over the excess surrounding those fights.