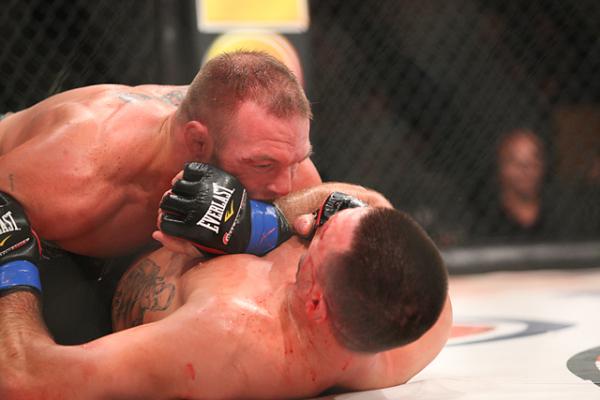 Lay and Pray: Is MMA Too Wrestling-Centric?

If your opponent can take you down at will…

If your opponent can maintain top position…

If you have no takedown defense…

…you may be in for a long night.

Nowadays, more fighters are focusing on aspects of wrestling in hopes of reaching the top tier of MMA competitions. Wrestling wins fights, but there’s a point where wrestling ruins fights.

At Bellator 129, the main event was dictated solely on superior wrestling—15 minutes of inaction, to be exact. Paul Bradley came in with dominant wrestling. He wasted no time taking his opponent, veteran Josh Neer, to the mat. Throughout the fight, Bradley did not improve position or present a threat for submission. He held a dominant, top position and did nothing with it. Neer was clearly frustrated during the fight and, at times, seemed bored, and rightly so. Neer argued with referee “Big” John McCarthy to stand him and Bradley up, but his requests were ignored. The Mid-America Center echoed boos from the fans overwhelmed with boredom who also encouraged McCarthy to “stand ’em up.” It appeared Bradley was complacent in Neer’s guard. He made no effort to improve his position. In other words, he stalled to a decision win.

Neer may have taken a loss, but he wasn’t the only one. The fans lost, too.

Had Neer and Bradley competed under “Pride rules,” the fans may have seen a different outcome. As the sport of mixed martial arts developed, rules evolved and regulations were set in place, leading to the development of the Unified Rules for Mixed Martial Arts, which has since been adopted by all state athletic commissions in the United States.

The Unified Rules require fighters to wear protective gear. It also put weight classes in place and redefined illegal strikes. Among the changes, time limits were put in place to avoid long rounds of inaction. Referees were also allowed to implement the “stand up” rule, where as referee can stand the two fighters up if there is no action on the ground or if the fighters do not improve their position.

While time limits and the “stand up” rule have been useful in avoiding boring fights, there are still a few fighters who win with a “wet blanket” game plan. One rule from the days of Pride Fighting Championships that might be effective for this situation is the penalty card for inactivity or stalling. Years ago, a referee could give a fighter a penalty card for inactivity, resulting in a 10 percent deduction from their purse. This was done to encourage fighters to stay active in the fight. In 2014, it appears some fighters still need that encouragement.

The sport has evolved a great deal since the implementation of the Unified Rules. As trends in refereeing and judging favor the wrestler, is it time to implement something new? Would a penalty card help to avoid snoozefests like the one we saw at Bellator 129?

Wrestling is a great facet of the sport, but as the name implies, mixed martial arts incorporates a variety of styles. A takedown should mean nothing if you do nothing with it. The lay and pray, hump and bump, wet blanket, grinding a decision win—whatever you call it—has got to go.