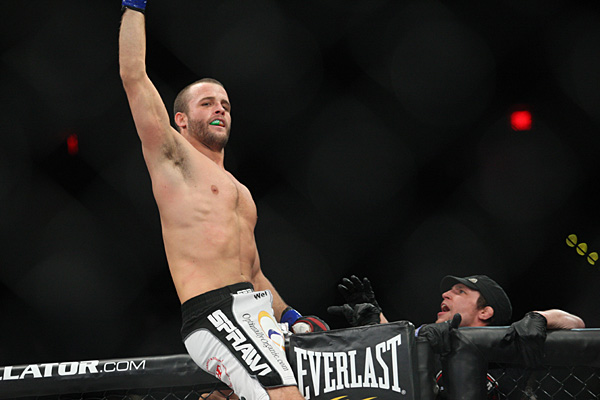 It’s the return of Bellator MMA when the promotion heads to Uncasville, Conn., for Bellator 123 to kick off the 11th season of the promotion on Sept. 5 at the Mohegan Sun Arena. The lineup features a four-fight main card headlined by a featherweight title tilt.

Patricio Freire finally gets his shot at redemption against Bellator featherweight champion Pat Curran when the two meet in the night’s main event. The fight is a rematch of their Bellator 85 meeting, where Curran retained his title over Freire. The Brazilian fought his way through the season-nine featherweight tournament in 2013 to earn another shot at Bellator gold.

At the heavyweight limit, Cheick Kongo returns to action against Lavar Johnson. Kongo looks to work his way back to the top and get another shot at champion Vitaly Minakov. Johnson, on the other hand, will look to get back on the winning path after a submission loss to Blagoi Ivanov at Bellator 116.

Also returning to the Bellator cage will be Muhammed “King Mo” Lawal, who will look to put his controversial decision loss to Quinton “Rampage” Jackson behind him when he squares off with Dustin Jacoby.

Rounding out the main card is a heavyweight tilt between Bobby Lashley and Josh Burns.

As always, the preliminary card will stream live on Spike.com starting at 6 p.m. ET. The main card action starts at 8 p.m. on Spike.

Now, with all the formalities out of the way, let’s jump into the first Bellator predictions of the new season.

The main event is a rematch of a Bellator 85 bout where Curran snagged a close split decision victory over Freire to retain his belt. Almost two years removed from that first contest, Freire gets a chance to right a wrong in his career after going through another Bellator tournament last year. The Brazilian cruised through the bracket, knocking out the likes of Diego Nunes and Justin Wilcox in the quarterfinals and finals, respectively.

What separates these two from each other is very minimal. Both guys like to press the pace and launch knockout shots. Curran and Freire are adept grapplers, too. Freire is a Brazilian Jiu-Jitsu based fighter who utilizes submission grappling, whereas Curran leans more heavily on a wrestling base.

Curran and Freire are also coming off recent fights, unlike last time when Curran was emerging from a 10-month layoff and Freire was two years removed from his last fight.

These two will most likely be keen to keep it on the feet, as they did in their first encounter. Curran was tested his last two matches against Daniel Straus, one of which was a decision loss for Curran, and now he is facing a completely different fighter. Straus was a wrestler, whereas Freire is a talented striker.

This one is going the distance. The pair will trade shots early on, and it should be a close fight from start to finish. The champion will retain his belt and steal another decision from Freire.

Kongo is coming off a win this past May over Eric Smith at Bellator 120 where he won by second-round TKO. The 39-year-old didn’t open the fight aggressively in the first round against Smith, instead approaching him patiently. It wasn’t until the second round that the real Kongo came alive. The French fighter was able to drag Smith to the mat and pummel him while maintaining top control.

That is Kongo’s game plan for sure here—bring Johnson to the ground and utilize his grappling and shots from the top to either wear down the Strikeforce veteran en route to a decision victory or score a TKO victory to get back on the path to another heavyweight title shot.

Johnson isn’t known for his grappling, and his last UFC fight against Brendan Schaub serves as an example of what could possibly happen in this fight. Johnson was dominated on the ground by Schaub, who was able to utilize his top control and strength to pin Johnson against the mat. Johnson is only 1-2 since that fight with his lone victory coming against Ryan Martinez at Bellator 111. The heavy-handed 37-year-old is going to want to keep this on the feet and utilize his power to keep Kongo at bay.

Johnson has to be wary not to be overly aggressive for two reasons. First, he doesn’t want to gas out early, which could be devastating against a grinder like Kongo. Second, he also doesn’t want to make it easier for Kongo to clinch and/or shoot for an easy takedown.

Kongo’s top control will wear down Johnson on the bottom and eventually either lead to a TKO late in the second or third round or result in a judges’ nod for Kongo.

This is Lawal’s first fight since his controversial unanimous decision loss to Quinton “Rampage” Jackson at Bellator 120. Lawal utilized his takedowns in that fight to secure what looked to possibly be a decision victory in his favor, but the judges saw it differently and awarded Jackson the win based on his striking.

“King Mo” needs to make certain this fight doesn’t go the same way if he wants to be on his way to another shot at the light heavyweight crown in Bellator. His game plan will most likely be the same as the strategy he utilized against Rampage—using takedowns to set up shots and control from the top—but his punches might come with more juice this time to finish Jacoby and avoid another dreaded judges’ decision. As a former NCAA Division I wrestler, the 33-year-old certainly has the wrestling chops to pull that off.

Standing across from him and doing everything in his power to stop Lawal’s takedowns will be Jacoby, who is currently riding a two-fight winning streak since his loss to current World Series of Fighting middleweight champion David Branch at WSOF 1. This is going to be an interesting fight, as Jacoby is going from one contest to the next with little time in between. His last fight occurred at Titan FC 29 on Aug. 22, a mere two weeks before he makes his Bellator debut against Lawal. Luckily for Jacoby, that fight with Lucas Lopes didn’t go past the first round.

The 26-year-old Jacoby holds eight career TKO or knockout finishes, including his TKO finish of Lopes. Jacoby has been alternating his time between MMA and kickboxing since his UFC departure. He has fought under the GLORY banner six times, amassing a 1-5 record.

Jacoby certainly has the kickboxing skills to be a threat to Lawal in the stand-up game. His fight with Lopes is a perfect example of what Jacoby is capable of doing. He landed a great head kick and followed it up with vicious punches to a crumbled Lopes before the ref came in and stopped the fight. If Jacoby is able to keep this fight on the feet, he could capture a victory over Lawal, who has had problems in the striking department that were apparent in the Rampage fight or his knockout loss to Emanuel Newton.

Although it’s not impossible to imagine Jacoby pulling off the upset, Lawal’s takedowns are going to be a difference maker and his top control will get him a TKO victory in the third.

Bobby Lashley and Josh Burns make their returns to the cage after almost a whole year off.

Lashley was a standout wrestler in college before going on to become a pro wrestler for WWE and now TNA. Lashley’s big disadvantage is his size—he is too small to be a true heavyweight, but his muscle mass puts him in that weight class instead of light heavyweight, where he’d probably stack up better against the competition in terms of size.

Lashley is a powerful wrestler, though, and he was able to execute his wrestling-based game plan in his last fight against Tony Melton. The 38-year-old Lashley took Melton to a decision and won. In doing so, he gives a little credence to the idea that he has a gas tank.

Of course, Lashley’s wrestling will be the key in this fight. The cross-promotion with his pro wrestling career is an added bonus which should help bring in fans from the TNA broadcast. Lashley has a nice setup here if he fights like he is supposed to against Burns.

Burns is 0-4 in his Bellator career. He has fought the likes of Eric Prindle, Thiago Santos and Rich Hale in his run with the promotion. Since his first Bellator fight, Burns is 2-4 overall. He is also around Lashley’s size, which should benefit Lashley in this fight.

Burns is going to want to keep this on his feet and try to outstrike Lashley and in doing so, possibly knock him out. However, the current TNA heavyweight champion should take this fight by TKO in the third.