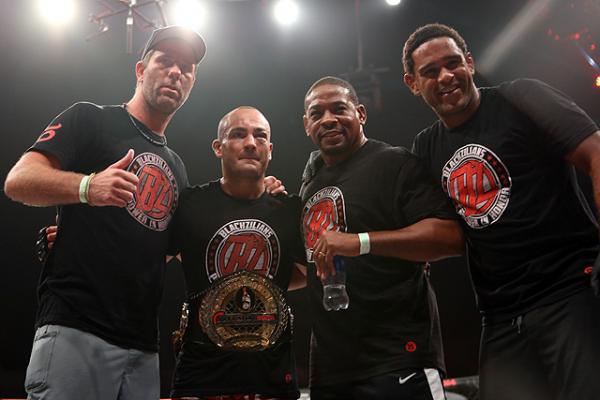 After nearly two years of legal battles and posturing, Eddie Alvarez has been released by Bellator MMA.

The 30-year-old lightweight has vacated his Bellator MMA title and has signed with the UFC. New Bellator MMA president Scott Coker confirmed the news of Alvarez’s release on Tuesday and the UFC immediately announced his signing.

Alvarez had long made it clear that he wished to compete in the UFC. The Philadelphia fighter signed to compete at UFC 159 in New Jersey, only to have former Bellator CEO Bjorn Rebney block the move via litigation.

Following the litigation, Alvarez returned to the Bellator cage and recaptured his title from rival Michael Chandler at Bellator 106 via split decision. It marked revenge for Alvarez, who previously lost to Chandler via fourth-round submission at Bellator 58 in late 2011.

The pair were expected to meet for a third time at the promotion’s inaugural pay-per-view event in May, but Alvarez suffered a concussion in training and forced out of the event. Chandler went on to lose a decision to Will Brooks at the event, leaving it unclear as to whom Alvarez would face next. Now, however, the answer is neither.

Now under contract with the UFC, Alvarez will face Donald Cerrone at UFC 178 in on Sept. 30 in Las Vegas. According to the promotion, Cerrone’s original opponent, Bobby Green, will be moved to a different event in the near future.