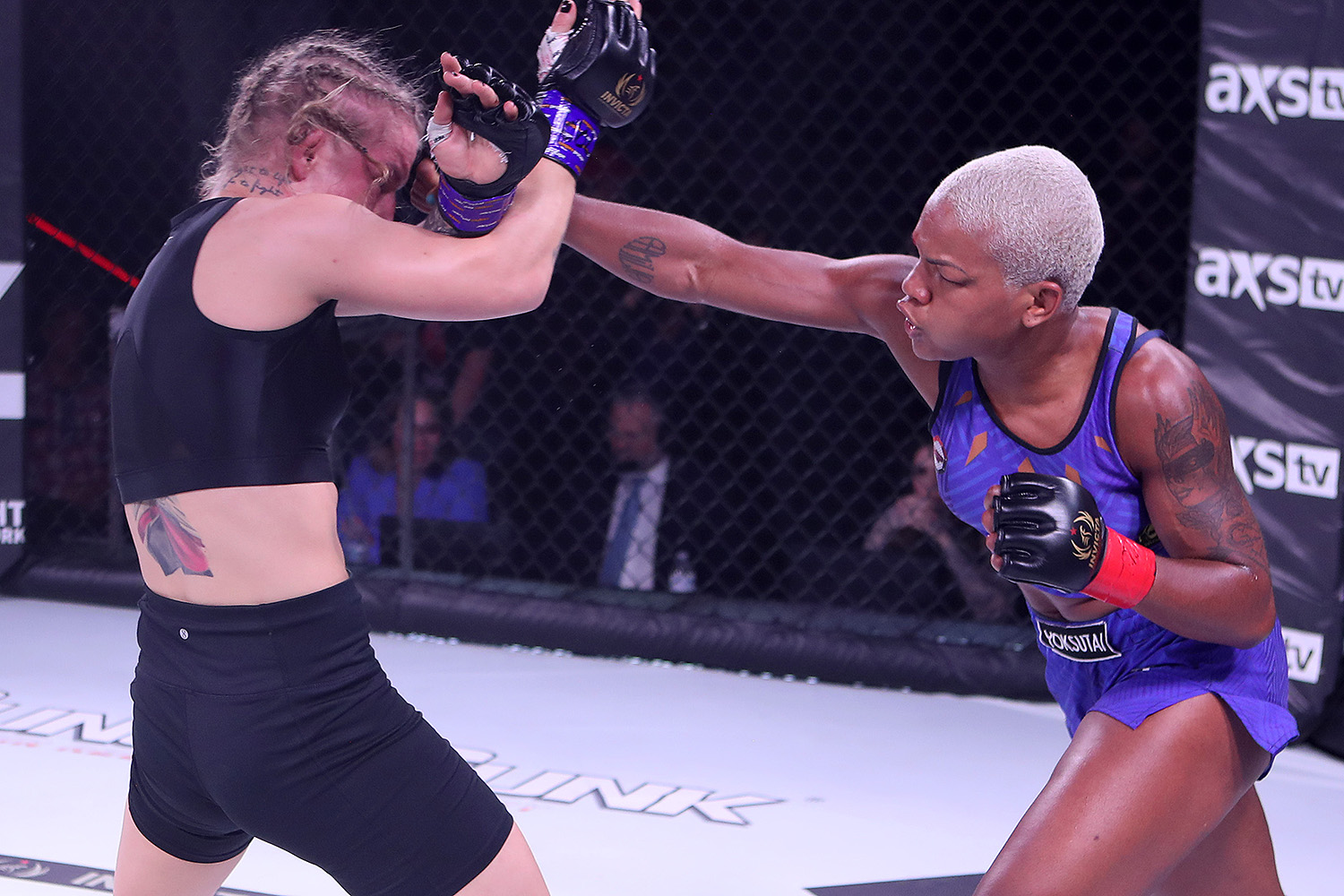 The second youngest fighter on this year’s list of prospects behind featherweight Bella Mir, recently-turned-20 Giovanna Canuto has the pedigree to be an outstanding mixed martial artist. The seasoned Brazilian jiu-jitsu player has committed to MMA and has already been a fighter that demands you keep an eye on her.

Canuto was born in Brazil, but currently trains in Las Vegas at 10th Planet Jiu-Jitsu. Her style is obvious: take her opponent down to the mat and work her incredibly good submission grappling. She has done just that, spending her entire MMA career with LFA, where they have slowly built the youngster up. Three of her four wins come by submission. She started her 2022 with a first-round rear-naked choke over Jasmine Pouncy before she stepped up in competition to defeat Contender Series veteran Jamie Colleen Miller by convincing decision.

Canuto has much time to grow, but she looks to follow in the footsteps of other outstanding female BJJ fighters in the UFC, such as Mackenzie Dern and Jaqueline Amorim. Her constant improvement is impressive, and she’s definitely a project worth investing in right now for the UFC.

The UFC has not had a ton of fighters from Japan on their roster in a while, for the reason being that there isn’t as much talent coming from that country as in the earlier years of MMA. However, one of the best female fighters outside the UFC right now has to be Seika Izawa, who deserves a crack at the UFC roster.

Izawa is an atomweight, so she’d have to move up to 115 pounds. That said, her tenacity and abilities in the cage would lend her well even having to fight up at that weight class. She’s an outstanding grappler with excellent submissions, which have been the cause of most of her wins in the cage. In 2022, she ran a 3-0 record, which included a dominant performance over former number-one atomweight Ayaka Hamasaki, a submission win over formerly undefeated prospect Laura Fontoura and an armbar over Anastasiya Svetkivska.

Izawa is just 24 years old and this good already. She’s got a strong resume already and only getting better. Hopefully the UFC can roster her this year and let her work her way up the women’s strawweight ladder. She’s first got to get through Si Woo Park on New Year’s Eve.

Making her second appearance on this list in as many years, Swedish prospect Josefine Knutsson continues to be a top strawweight prospect in the world. She’s clearly on the UFC’s radar as well, as she competed on their Road to UFC card in Singapore this year.

Knutsson is a Muay Thai stylist with an extensive background in professional kickboxing, as she’s only been a pro MMA fighter since Mar. 2021. In that time, though, she has taken on some decent fighters with some experience, looking strong in all of her wins. After a strong three-fight 2021 campaign, Knutsson took just one fight in 2022, scoring a clear-cut unanimous decision victory over Ye Dam Seo in the aforementioned Road to UFC card.

Knuttson is 26 years old and has a wealth of combat sports experience, even if it’s not as much MMA as it is other striking sports. She doesn’t need to be thrown into the deep end immediately, but Knutsson is certainly a fighter with high upside that could be a longtime UFC roster member.

When it comes to activity in the year 2022, there may not have been a busier prospect in this series than Brazil’s Valesca Machado. That hard work paid off to cap off her 2022, as Machado became the Invicta FC strawweight champion, something that should make her a shoo-in to walk onto the UFC roster this year.

Machado is an excellent athlete with good quickness on the feet, solid striking fundamentals and submission ability on the mat. There aren’t many she’ll step in the cage with that will have the natural athleticism she has. She scored four wins in 2022. She started off with a first-round submission of Janelice Moraes in her native country of Brazil. She then came to Invicta and easily defeated Liz Tracy in her debut. That led to her inclusion in the Invicta strawweight title tournament, where she fought two three-round fights in one night, besting Ediana Silva and Karolina Wojcik.

Machado’s efforts in Invicta this year and her championship status should not make the UFC think twice about bringing her to the roster. She’s already fought in front of them during last year’s Contender Series, where she fell, but she’s clearly gone back to the drawing board and improved. Plus she’s 27 years old, meaning, she’s hitting her prime right now.

One of just a couple fighters who lost in 2022 and still made this list, Ewelina Wozniak is still a top strawweight prospect despite that record blemish. The Pole is an aggressive finisher, which lends well to what Dana White looks for in a UFC fighter.

Wozniak is primarily a submission grappler, but she does have power in her strikes and has no issues fighting on the feet. She has fought under respectable promotions such as Ares FC and Brave CF, showing she has solid experience at a higher level. She started off her 2022 with a loss to two-time Contender Series fighter Maria Silva by third round rear-naked choke. She jumped back in the win column, though, with a huge comeback win, beating top Russian prospect Anastasia Feofanova with a rear-naked choke of her own.

Poland has become a hot bed for tough, talented fighters in the recent years and Wozniak is just another example. She could be competitive with most of the women’s strawweight roster right now, so the UFC should really consider giving her a shot.