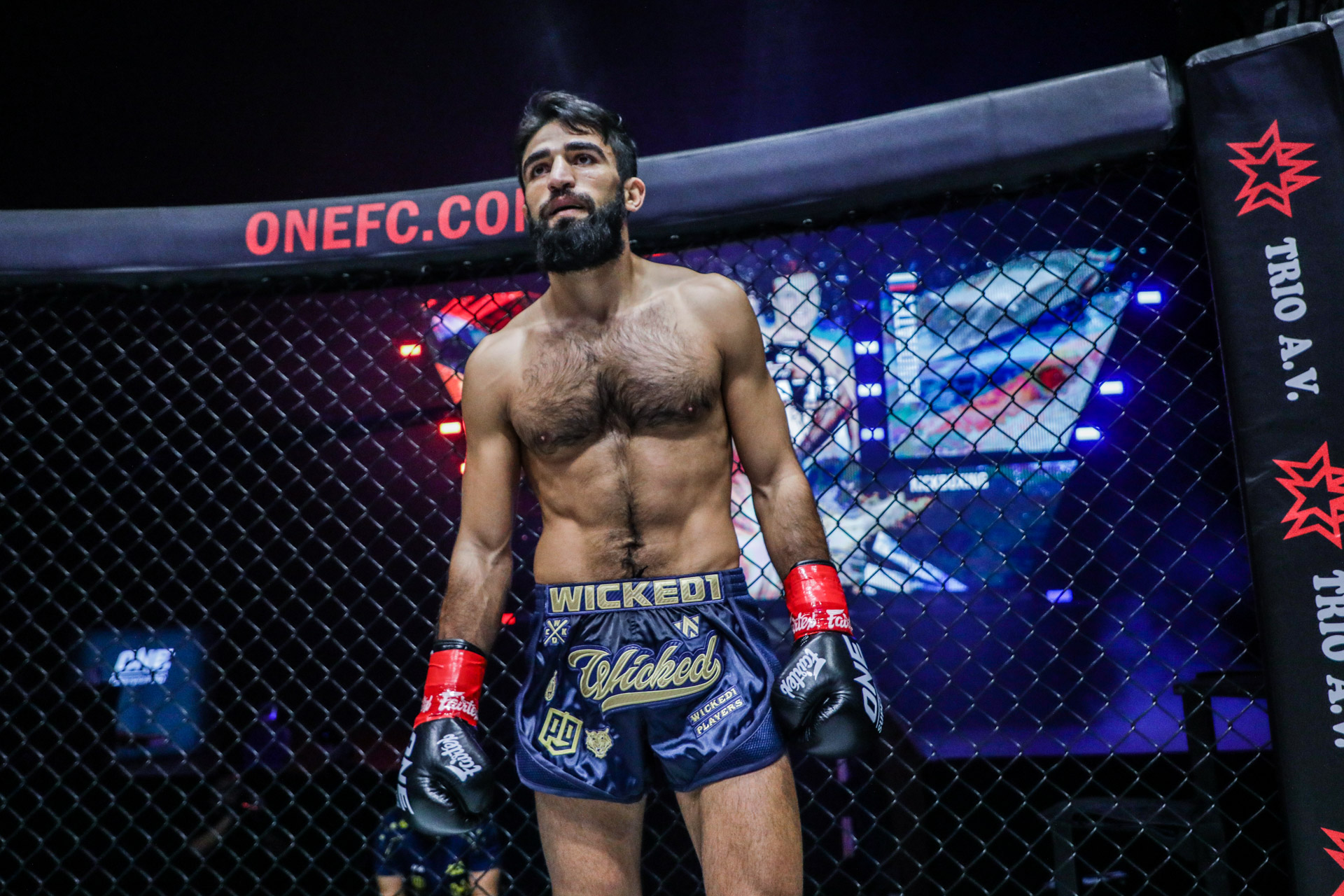 Roman Kryklia remains firmly cemented in the top-three of the heavyweight rankings with a first-round knockout of former GLORY title challenger Guto Inocente at ONE 161 in the semifinals of the ONE heavyweight kickboxing grand prix. The reigning ONE light heavyweight titleholder won his past twelve contests, including two ranked competitors this year.

Formerly seventh-ranked Zabit Samedov sailed off into the sunset in his final kickboxing fight with a first-round knockout over UFC veteran Antônio “Bigfoot” Silva at Mix Fight Championship in Azerbaijan. The Georgian-born Azerbaijani heavyweight ended his career on a 21-fight winning streak, which included victories over Badr Hari, Stefan Leko, Danyo Ilunga, Errol Zimmerman, and Melvin Manhoef. He wrapped up his career with an overall record of 103-9-1 with 38 knockouts.

Rade Opačić successfully returned to the heavyweight top-10 following his second-round knockout over Greece’s Giannis Stoforidis at ONE on Prime Video 2.

Former top-10 heavyweight Iraj Azizpour makes his return to the rankings after a more than three year hiatus from the list. The Iranian heavyweight earned his potential rubbermatch with third-ranked Roman Kryklia after earning a unanimous decision victory over Brazil’s Bruno Chaves at ONE 161 during the semifinals of the ONE grand prix. Also Turkey’s Cihad Kepenek debuts in the rankings with his first-round knockout victory over Nordine Mahieddine in August after previously losing to the formerly ranked heavyweight.

The light heavyweight division featured a few changes in the month of September. Tenth-ranked Ibrahim El Bouni extended his winning streak to three with a decision win over Morocco’s Badr Ferdaous at GLORY Rivals 2.

Germany’s Lukas Achterberg makes his rankings debut with a first-round flying knee knockout over formerly ninth-ranked Anthony Leroy at SENSHI 13. There was one other major change in the light heavyweight rankings this month that featured one fighter entering and one leaving, both due to a re-evaluation of their activity in the division.

Russia’s Nikita Kozlov makes his rankings debut after a litany of activity in Russia. That leaves Gökhan Saki as the odd man out with only one victory in the past seven years, albeit against James McSweeney, who held victories over Ilunga and Murat Aygün. As fighters continue to fight ranked competition, return to action after hiatus, or generally just fight more often, we will evaluate their success with a bias towards results and recency.

Former GLORY welterweight champion Alim Nabiev moves up one spot in the welterweight rankings with his decision victory over Romanian Andrei Ostrovanu at Mix Fight Championship. Endy Semeleer scored a third-round TKO victory against Shkodran Veseli in the main event of GLORY Rivals 2. After his successful promotional debut, the fourth-ranked welterweight earned a shot at the vacant GLORY title against second-ranked Alim Nabiev at GLORY 82 in November. Sixth-ranked Mohamed Touchassie defended his welterweight title against Soufiane el Ballouti at Enfusion 112 to keep his undefeated record at 9-0.

After a number of changes leading up to the ONE Amazon Prime 2, former GLORY lightweight champ Marat Grigorian earned a hard-fought decision nod over sixth-ranked Tayfun Özcan following three rounds of action. Grigorian was originally scheduled to face Jamal Yusupov and Özcan was supposed to fill in on short notice in place of Chingiz Allazov, who was scheduled to face ONE champion Superbon Singha Mawynn.

Dropped from the rankings: Kaito Ono (1)

Top-ranked Kaito Ono was successful at 70-kilograms against Kendal Karakurt at Shoot Boxing 2022 act.4. Unfortunately for him, he has been removed from the super featherweight division after multiple victories at lightweight.

Third-ranked Jia Aoqi continued his six-fight winning streak with a decision over Thailand’s Wacharalek Or.Kwanmuang at Wu Lin Feng 531. Despite the victory, the bout took place at 71.5-kilograms, therefore the bout’s outcome will not be reflected in the rankings. Ranked featherweight Meng Gaofeng moves up to the super featherweight division following two consecutive contests at 67-kilograms, a loss against Jia Aoqi and his most recent fight, a victory over Wang Wei at Wu Lin Feng 531.

Dropped from the rankings: Meng Gaofeng (10)

K-1 super lightweight champion Tetsuya Yamato successfully defended his belt against Krush titleholder Daizo Sasaki by unanimous decision at K-1 World GP 2022 Yokohamatsuri to stop the challenger’s 10 fight winning streak. Eighth-ranked Capitan Petchyindee lost a decision to Russia’s Alaverdi Ramazanov under Muay Thai rules at ONE 161. Due to the rule set, the results of the fight will not be reflected in the rankings. After two consecutive bouts at 67-kilograms, Meng Gaofeng moves to super featherweight. Kosei Yamada returns to the featherweight rankings with the departure of Gaofeng.

Dropped from the rankings: Yuzuki Satomi (10)

China’s Jin Ying moves up two spots in the super bantamweight rankings with his decision victory over Ma Yunkang at WLF 531, his fifth straight win. The 2020 WLF China eight-man tournament winner Zhu Shuai earned a decision nod over San Shun at the same event. Shuai has 13 wins in his past 16 contests with all three of his losses coming at the hands of Jin Ying. YA-MAN has been moved to his proper division.

The once second-ranked bantamweight, Leona Pettas, made his return to the rankings after winning the vacant K-1 super featherweight title with three victories in one night. He knocked out his first two opponents, Ayoub Segiri and Tatsuya Oiwa, before scoring a decision over second-ranked Hirotaka Asahisa. Pettas was dropped from the rankings after two consecutive fights above the weight limit, however. The former Krush champion returned to the division in prime form with two top-10 victories in one night.

As for the runner-up, Hirotaka Asahisa, he stopped both of his opponents prior to the finals, Thailand’s Nakrob Fairtex and eighth-ranked Tomoya Yokoyama. In the quarterfinals, Tomoya Yokoyama scored a ‘Knockout of the Year’ head kick against Greece’s Stavros Exakoustidis and tenth-ranked Tatsuya Oiwa defeated the infamous Adam Bouarourou. At Shoot Boxing 2022 act.4, 24-year-old Hyuma Hitachi upset the Shoot Boxing 60-kilogram champion Yuki Kasahara, who was riding a seven-fight winning streak. Hitachi makes his debut at five following his seventh straight victory during his nine-fight unbeaten run. Ninth-ranked. Huang Shuailu defeated fellow countryman Li Xancheng at WLF 531 to keep his standing in the division.

Dropped from the rankings: Takumi Terada (10)

The only fighter in action during the month of September was Ryusei Kumagai, who makes his return to the super flyweight rankings following a first-round knockout over Yukinori Ogasawara at KNOCK OUT 2022 vol.5.

Dropped from the rankings: Yugo Kato (10)

The flyweight division featured a shocking result when former two-time Lumpinee stadium champion Kompetch Sitsarawatsuer took out the top-ranked kickboxer Masashi Kumura in his kickboxing debut at K-1 World GP 2022 Yokohamatsuri. Akihiro Kaneko scored a first-round body shot knockout against the United Kingdom’s Jordan Swinton at the same event. Kaneko moves up one spot in the rankings after six wins in his past seven, including wins over Kumura and Riamu.

Dropped from the rankings: Ryunsokue Omori (10)

Tenth-ranked Ryunsokue Omori was dropped from the rankings after two consecutive bouts at 55-kilograms.

The pound-for-pound rankings featured a number of changes with multiple fighters dropping out of the top-10. Tenshin and Takeru have been removed from the rankings after giving them credit for a month following their historic cross-promotional contest at The Match. Two other fighters have dropped from the rankings, Giorgio Petrosyan and Masashi Kumura. Chingiz Allazov and Taito Gunji make their pound-for-pound debuts. Sitthichai and Petchpanomrung make their rankings return.

Second-ranked pound-for-pound kickboxer Anissa Meksen defeated Thailand’s Daokongfah Banchamek under Muay Thai Rules at ONE on Amazon Prime 2. However, the results will not affect the rankings. Fourth-ranked Sarel de Jong extends her winning streak to eight after she took home the decision win over Portugal’s Sofia Oliveira at Enfusion 110.