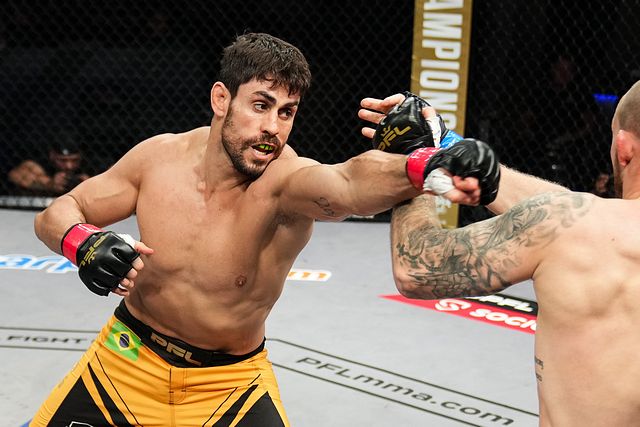 What Does PFL Mean to MMA?

The PFL is a fighting league for American mixed martial arts. It stands for Professional Fighters League and was founded in 2018.

The new fighting league was designed to break up MMA fights into a regular season, a playoff season and the championships. Before PFL came along, fighters were expected to battle against each other all year round.

The PFL wanted to break up the times to allow different styles of tournaments for both the viewers and the fighters to participate in.

How Does The PFL Season Work?
To truly understand PFL, you need to understand how these new seasons will work. Just like with UFC betting, knowing how PFL operates can help you pick the best fighters in a matchup.

The point system is designed to encourage fighters to win via finish instead of decision. The same goes for the scheduling.

In the UFC and other MMA leagues, you expect fighters to be paired due to promotional factors, such as who will get the most views. However, the PFL everyone has to fight everyone, and each fighter could battle twice to get to the championship.

This means you don’t need to be popular to get screen time, and newcomers have the same chance to reach the championships as the favorites.

How Is PFL Different From UFC?
Although the structure of PFL is different from other MMA fighting leagues, the rules follow the Unified Rules of MMA. This means the actual fights will look very similar to the Ultimate Fighting Championship.

For the fighters themselves, the biggest difference between the UFC and the Professional Fighters League is the standardized prize money. It doesn’t matter which category is getting the most views, each division will be awarded the same winnings.

The same goes for the women’s division. Although, since they only have one division to enter, the woman champion receives the same prize money as the men winners.

The second reason that fighters are moving to PFL is due to their treatment. There are fewer fights in the PFL throughout the year, as they allow for an off-season. This means that fans don’t feel overwhelmed with the number of fights they have to catch up with, and the fighters themselves can schedule time off.

A great example of this is when Andre Harrison asked for this scheduled fight to be changed so he could attend his daughter’s birthday party. The PFL agreed to this change, creating a better working relationship between the fighters and the promotion.

The Fighting Format And The Point System
The fights are held in the SmartCage, which is 10-sided to allow for more viewing. Although the Professional Fighters League follows the United Rules of Mixed Martial Arts, they also add in an additional rule – no elbow strikes.

Another change is allowing fighters who are overweight in their category to continue fighting. These fighters can still take part, however, they will have one point reduced from their total and they will not be able to win any points in this bout. Instead, they’ll aim to prevent other fighters from earning points.

Because of the point system, fighters no longer have to win two fights in a single night to move on to the next round, nor do they have to partake in the quarterfinals.

This means that fighters who knockout their opponents in the first round receive six points in total for the match.

This encourages fighters to aim for a finish rather than wait out the game through the distance. This is because the audience loves to see a fighter fall to the ground. While aspects of PFL focus on the fighter’s well-being, this aspect is aimed to please the fans.

Summary
PFL stands for Professional Fighting League. Just like in the UFC or Ultimate Fighting Championship, the fighters battle against each other to win the title of champion.

However, in the PFL, the tournament is scored differently and allows for an off-season break. This league promotes KOs and submissions over endurance, and every fighter has the chance to win the same amount of money, creating an even playing field among divisions.