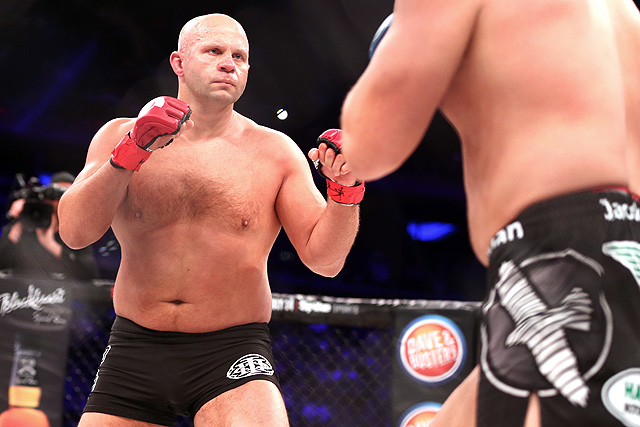 Bellator 198 Results: Emelianenko Crushes Mir in Under a Minute, Advances in Tournament

On Saturday, April 28, Bellator MMA returned to the Chicago area for its 198th event which took place from the Allstate Arena in Rosemont, Ill.

In the night’s main event, two of the sport’s most decorated heavyweights finally locked horns as former Pride FC king Fedor Emelianenko met former UFC titleholder Frank Mir in the opening round of the heavyweight grand prix. The 41-year-old Emelianenko made his Bellator debut last June, falling via knockout in just 74 seconds to Matt Mitrione. The loss snapped a five-fight winning streak for the Russian. Mir, meanwhile, had been sidelined for over two years due to a performance-enhancing drug suspension. The 38-year-old was just 2-6 over his last eight appearances, including a first-round knockout defeat to Mark Hunt in his last bout.

The action kicked off with a live preliminary-card stream on Combat Press at 7 p.m. ET. The main card followed at 9 p.m. ET on the Paramount Network.