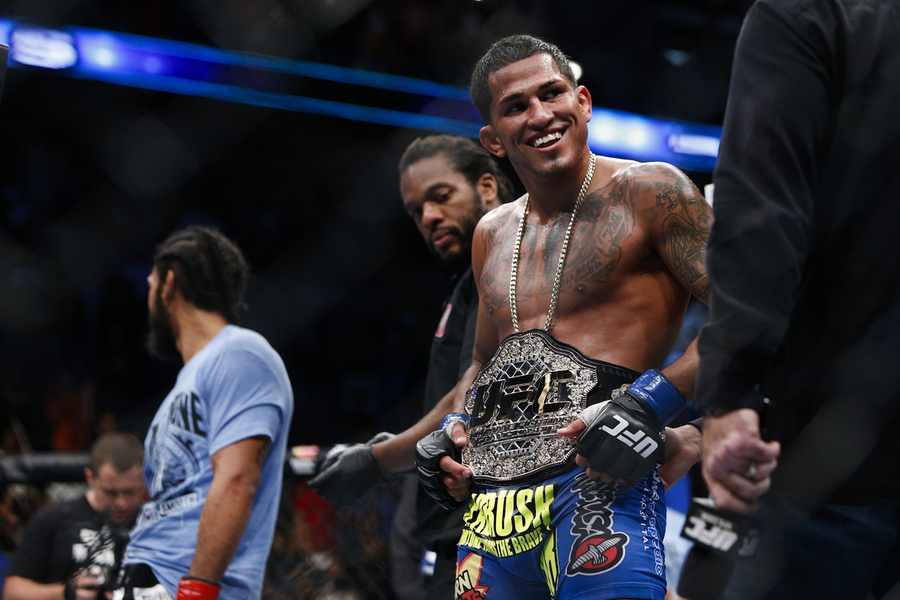 Will the UFC Always Serve a Niche Market?

If you’re a regular visitor to Combat Press, chances are you’re not much different than the staff here. Your Twitter feed is full of fighters and MMA writers. You plan your weekends around fight schedules. You’re immersed in the sport on a daily basis. You might even believe the sport’s popularity will one day rival the NFL, just as UFC President Dana White promises it will. Then, you realize that you’re in a bubble with the rest of us.

Have you tried carrying on a conversation about MMA with your co-workers? Chances are they nod their head and the only thing they have to say is, “That’s cool.” The friends you gather with to watch football on Sundays have no idea who Chris Weidman or Anthony Pettis are. When you bring up the UFC, people still refer to it as human cockfighting because that’s what they remember it being 20 years ago.

Perhaps you’re one of the lucky ones, or perhaps it’s just a regional thing, but even here in Southern California where I sit just a few blocks from Black House MMA and an equal distance from a UFC Gym, it’s surprising that it feels like the average person knew more about the UFC five years ago than they do today. There’s no data to back that up, of course. It’s just the impression I get in my day-to-day conversations with people.

What can it be attributed to? Did “going mainstream” backfire on the UFC? The Ultimate Fighter sure hasn’t launched on Fox Sports 1 in a way the UFC hoped it would, and only time will tell if leaving Spike TV was a good decision. Not only are people still having a hard time finding Fox Sports 1 (which is ridiculous and stems from pure laziness), but leaving Spike TV also paved the way for Bellator to find a home and promote its brand on a grander scale.

MMA doesn’t have an offseason, and while the brand of the UFC has become easily recognizable, there are simply too many shows, postponed fights and bad publicity standing in the way of the sport becoming anything more than a niche for the foreseeable future. Think of the major storylines surrounding MMA over the last few months. The two stories that attracted the most buzz? Jason “Mayhem” Miller live tweeting a standoff with the S.W.A.T team and War Machine beating the crap out of his girlfriend. Guess who the casual fan connects those two fighters with. The UFC, of course, because that’s all they know MMA to be.

There’s nothing wrong with being a niche sport. Hell, soccer is still considered a niche sport in the United States and yet it’s the most popular sport in the world. The confusion lies with trying to understand what the ultimate plan is for the UFC. It’s apparent the company isn’t going to conquer the world the way its outspoken president thinks it will, and there are so many obstacles on the horizon that Zuffa is going to encounter.

We—you know, the people in the bubble—feel a sense of momentum gaining with fighters not being happy with their pay. It wouldn’t be surprising to see Tito Ortiz and Ken Shamrock partner up and form a management team to lure fighters in with promises of getting them more money, whether it be with the UFC or elsewhere.

Then, there’s the really scary subject that all MMA organizations are going to face down the road: head injuries and concussion issues. If the NFL has to deal with this, don’t you think MMA is next in line? It really seems like a train wreck is coming.

These are all huge issues for fans and the athletes themselves. MMA is sport in its truest form, and at times it can be disheartening that there doesn’t seem to be any sort of direction that the sport is going in. Right now, it’s the UFC cranking out as many fights as possible, while Bellator and the World Series of Fighting provide a home for those who the UFC cuts. All three organizations are doing a horrible job with branding their fighters so that casual fans have a reason to watch the fights. As good as we may think a fight card is, it doesn’t mean a thing to the general public who has never heard of any of the fighters on the bill. There’s a reason people still talk about Chuck Liddell, Randy Couture and Tito Ortiz. They were icons of the sport.

Who is MMA’s icon now? Ronda Rousey? What would someone outside the bubble probably say about her? Well, it might sound something like this…

“Yeah, I think I’ve heard of her. She fights that UFC stuff, right?”