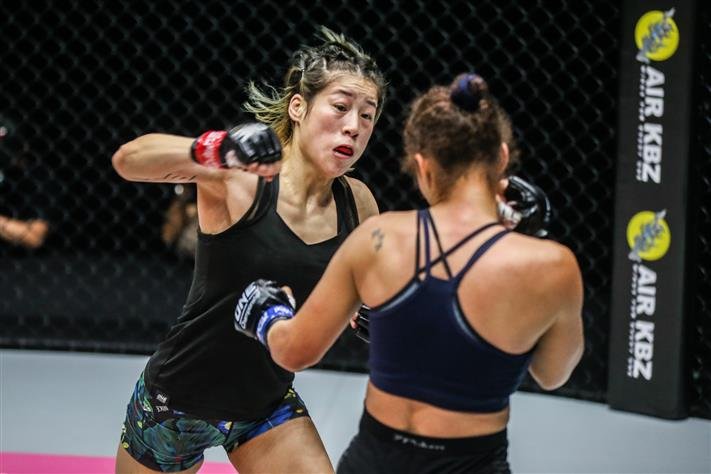 Bo Meng has been in a force inside the ONE Championship Circle, but a first-round upset loss in the quarterfinals of the ONE women’s atomweight grand prix sent her back to the drawing board. The Chinese star now feels refreshed and will take on a new challenge when she moves up a weight class to face top-ranked strawweight contender Tiffany Teo at ONE Championship: Heavy Hitters on Friday, Jan. 14.

The loss at the hands of Ritu Phogat in the grand prix was disappointing for Meng, but she has used the experience to address the deficiencies in her game.

“It definitely bothered me, and I felt regretful because I went into the match with the mindset of winning the Grand Prix,” said Meng. “But it’s normal to win or lose, and I think the process is more important. For example, after that match, I realized I need to strengthen my ground and cage-fence training.”

The 25-year-old has embraced change ahead of her return bout and will debut a new look when she makes the walk on Jan. 14. Meng hopes that it’ll be the start of a new beginning as she looks to establish herself as a threat to ONE women’s strawweight world champion Xiong Jing Nan.

“I changed my hairstyle – I shaved my head – and then decided to strengthen my ground and fence training,” said the Chinese star. “And I watched more of other people’s fights to shape a stronger heart. I also recorded more videos during my training to get to know myself better. Yes. A new challenge, a new start. It is good to challenge the highest-level opponents at the beginning.”

But the new division will also allow Meng to enter the Circle with more energy and vigor as she won’t have to focus too much on making weight in a lower division. Moving to a new division is something she has always wanted to try. In part, to see if she could retain her biggest assets without diminishing the returns.

“I actually just want to give it a try,” said Meng. “In fact, when I was at atomweight, dropping too much weight affected my state. It will be easier to drop weight at strawweight, so I want to try. It all depends on how things go. As long as I can bring a spectacular performance, I can try any weight class.”

One of her greatest skills is power. Meng is known for it, and she sees Teo’s strengths as being similar to hers. However, the Chinese athlete believes she will have the advantage against the division’s number-one-ranked contender.

“Tiffany’s stand-up and power are her advantages,” said Meng. “I’m not particularly clear what her disadvantages are. I only know that I have to strengthen my cage fence and ground skills. I watched all her matches, and she was actually technically rough, and I was more fluid.”

Although Meng has spent time addressing the holes in her game, don’t expect the Chinese athlete to switch up her tactics once the Circle door closes. She simply wants to address her weaker points and utilize the strengths that got her to the global stage. And, she is hoping to get another show-stopping knockout finish in the process.

And if she does get the knockout over the Teo on Jan. 14, a meeting with the winner of the main event, Xiong Jing Nan vs. Ayaka Miura, could be in order. Meng expects her compatriot to pick up the victory that night and continue reigning over the division, but she is not looking ahead to getting a title shot just yet.

“I think Xiong Jing Nan will win,” Meng predicted. “Miura actually has nothing except wrestling, and her stand-up game is poor. So, as long as her takedowns are defended, she should have no power left to wrestle after the first round.

“The ranking is not important to me, but the world title shot is important. But let’s win the next bout first. I haven’t thought about it, but the point is to do your best every bout, and if I really get this opportunity, I’ll go all out.”

But to earn that title shot, she will first need to topple Teo on the lead card at ONE Championship: Heavy Hitters. The strawweight contest carries some of the biggest stakes on the card and will help set the tone for the evening. 2022 is a new year, and a new Bo Meng is ready to shake up the strawweight division right out of the gate.

ONE Championship: Heavy Hitters will air on Friday, Jan. 14, on YouTube at 5 a.m. ET.