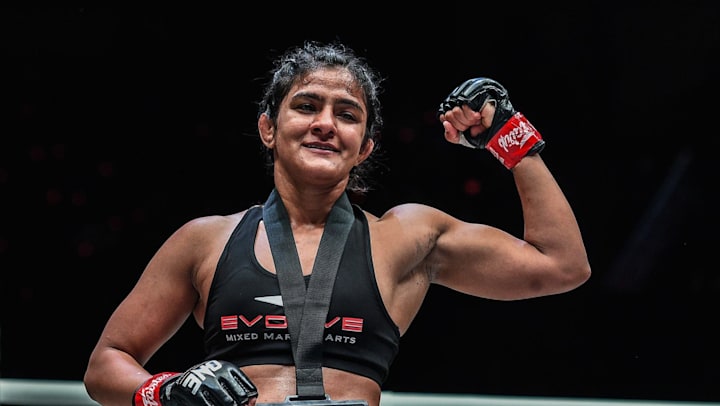 ONE Championship’s Ritu Phogat: Wrestling for the Win?

It’s no secret that wrestling is one of, if not the, best base for mixed martial arts. While not foolproof, solid wrestlers have proven over and over again that they have a unique ability to neutralize some of the best strikers in the world. One case in point is Ben Askren.

Askren was an NCAA Division I standout freestyler from the highly acclaimed wrestling program at the University of Missouri. After winning multiple prestigious competitions, including the World Championships in 2009, the Iowa native went 18-0-1 in professional mixed martial arts, which included winning both the Bellator and ONE Championship welterweight championships. After multiple defenses of each belt, the only way he could lose those titles, was when he vacated them.

Well, ONE Championship has another rising star on the horizon who could prove to be their female version of Askren. There is an Indian freestyle wrestler about to jump out from the shadows as the promotion hosts the final bout of their women’s atomweight grand prix on Friday, Dec. 3.

27-year-old Ritu Phogat has been wrestling for most of her life. She comes from a family of wrestlers, and started training with her father when she was a young child. Phogat was quite successful in her amateur wrestling career, picking up multiple national championships, a gold medal at the 2016 Commonwealth Games and a silver medal at the U23 World Championships in 2017. Like Askren, her wrestling translated nicely into MMA, but she is arguably a much more exciting fighter.

Phogat made her pro MMA debut only two years ago, and while she is currently 7-1 on paper, there is definitely an argument that she has never been beaten.

“The Indian Tigress” could not have a better moniker. While she never shies away from a striking exchange, her offensive wrestling could quite possibly be second-to-none. In fact, unlike a lot of wrestlers, including Askren, Phogat is not afraid to take her opponents down at will, but if the ground action slows, she will step back, let her opponent up, and do it again. Even for the atomweight women, which can have deep gas tanks, this is very detrimental to her opponent’s cardio.

In Phogat’s fifth MMA outing, she faced Bi Nguyen at ONE Championship: Dangal last May. While Nguyen held an extremely fast pace on her feet, the pace would prove to be no match for Phogat’s wrestling. The Indian combatant repeatedly took her opponent down. If it weren’t for the cage, Nguyen may not have been able to get up and reset as often as she did, which was not often at all. Phogat is not a lay-and-pray type of wrestler, always staying active on the ground. However, when the judges’ decision was read, Nguyen ended up with a very controversial split-decision win.

The Nguyen fight was by no means a setback for Phogat. In fact, if anything, it just added fuel to her fire. Between late July and late October, she has strung together three wins in a row, with the last two coming in the quarterfinals and semifinals of the atomweight grand prix. Tomorrow, she will meet her polar opposite fighting style when she faces Muay Thai ace Stamp Fairtex at the Singapore Indoor Stadium in the ONE Championship: Winter Warriors co-main event.

Askren was able to maintain his status as a dominant unbeaten champ through 20 fights, including his UFC debut, when he submitted Robbie Lawler with a bulldog choke. However, his 21st fight would prove to be the beginning of the end, when he telegraphed a double-leg takedown in the opening seconds of his fight with Jorge Masvidal and ate a knee that put him to sleep. Could the same happen to Phogat against Stamp? While anything can happen in a fight, it’s not highly likely.

When Askren faced Masvidal, he was on the tail end of a long and successful career. He was also a week away from his 35th birthday after decades on competition. Phogat is another story, as she is still early in her career, and her best is yet to come.

Now, in all fairness, Stamp is a rising superstar in her own right. The Thai fighter has an extensive kickboxing career, which has culminated in a 63-17-5 record. She, like Phogat, has been training since she was very young, and, at only 24 years old, has a long career ahead as well. Stamp’s record also sits at 7-1, but her sole loss was a definitive one, as she was submitted by Alyona Rassohyna last January. Since then, Stamp has strung together two wins, first avenging her loss to Rassohyna by split decision in the quarterfinals of the atomweight grand prix. Her last outing was a dominant victory over Julie Mezabarba in the semifinals at ONE Championship: Next Gen.

Naturally, the grand prix final is being billed as a “classic striker-versus-grappler” match-up, but is that really the case? Likely not in the typical sense.

When people hear “striker versus grappler,” they usually think of a traditional boxer or kickboxer and a jiu-jitsu black belt. However, with Phogat and Stamp, that is not the case. Stamp is a Muay Thai expert, who truly embraces the Art of 8 Limbs, while Phogat is clearly a super active wrestler. This poses a truly unique match-up. However, it’s hard not to like Phogat in this one.

Many people would likely give the betting nod to Stamp. She has a more established name in the combat sports world, and her striking is quite amazing. But, it’s hard to overlook that submission loss. Rassohyna has nowhere near the wrestling prowess that Phogat brings to the table. If the Indian wrestler can close the distance, and get the fight to the mat, it’s hard to see a path to victory for Stamp. The grand prix winner will face champion Angela Lee for the undisputed ONE atomweight title, and nobody should be surprised if that winner is Ritu Phogat.