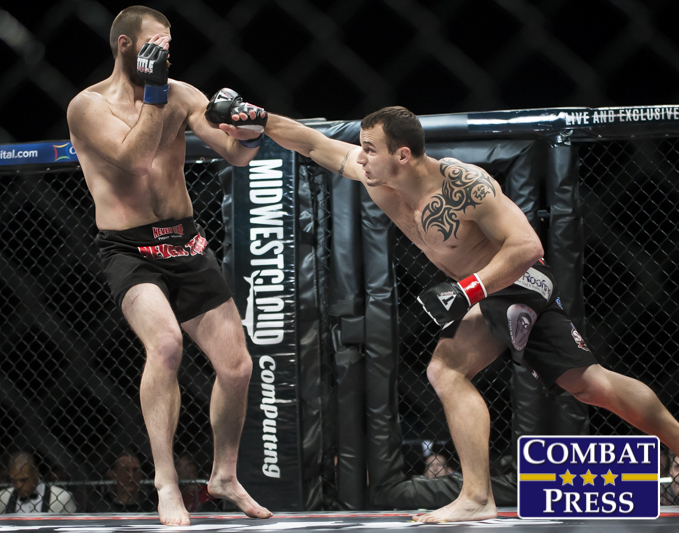 Work ethic can be tough to quantify, unless a guy works his ass off hard enough. Then, it’s easy to identify.

Dakota Cochrane has always had an amazing work ethic. Whether it’s training and preparing for several fights per year, carrying a full schedule of personal-training clients, taking care of his family, or co-owning a business, the Nebraska native and veteran combat athlete has always worked his ass off.

Eleven years ago, Cochrane made his pro MMA debut. He has since gone 33-13 in the sport. He added on a 2-0 record in bare-knuckle boxing over the last two years with wins over UFC veterans Johny Hendricks and Chris Leben.

Meanwhile, in 2015, Cochrane and his wife Lacey welcomed their third child into the world.

In 2018, he and his business partner John Noojin founded Husker Deck & Patio, which has really grown in 2020.

Cochrane has been able to focus more time than usual on his business in the last year, because the fight game has been relatively quiet for him. In 2018, he had only three fights, which was a slow year by his standards. In 2019, he had just one MMA fight, which came under the M-1 banner in April, and a bare-knuckle fight with Leben was in June. Since then, it’s been nothing but crickets.

“[M-1] kept telling us that it was going to be a good opportunity to go overseas,” Cochrane said, “but we literally heard nothing from them after that. They didn’t like what they paid us. I don’t know if that was the issue or what.

“The [other] stupid fights kept getting dropped off. I’ve been trying, but nothing’s pulled through.”

In March, Cochrane was scheduled to fight Joey Angelo for the Bare Knuckle Fighting Championship organization, but Angelo pulled out. Melvin Guillard was picked as the replacement, but the March 14 event was eventually scrapped altogether due to the coronavirus (COVID-19) pandemic. Cochrane went until mid-November before he finally got something on the docket. In the interim, he continued to lift weights in the mornings and train at Premier Combat Center in Omaha, Neb., in the evenings.

Cochrane was finally lined up for his next fight, with his opponent set to be Mike Richman. However, that fight, slated for the BKFC stage on Nov. 18, fell through when Richman pulled out. Two days after the scheduled bout, Cochrane signed a contract to fight Tyler Vogel at BKFC 15. That fight is set for Friday night.

Vogel was 8-4 in MMA before taking on a boxing bout in June 2019. He lost that outing by decision and then suffered another defeat in an MMA fight in Sept. 2019. He was supposed to have three more fights in the following year, but he no-showed one and had a couple others fall through. The 28-year-old lost another boxing match in October and just dropped his first bare-knuckle fight at BKFC 14 in November.

“I guess his management is doing a side bet with my management. They must be pretty confident.”

Cochrane has always been a powerlifter, and his fighting weights have ranged from lightweight and welterweight in MMA to catchweights of 200 pounds against Hendricks and 191 pounds against Leben. Vogel has fought all the way from welterweight to heavyweight, and he will enjoy a seven-inch height advantage against Cochrane. Meanwhile, skill and experience are definitely in Cochrane’s favor.

Cochrane feels at home with BKFC. After the fight with Vogel, he would like to make a run toward the top in 2021.

“There’s a [185- or 175-pound] tournament that I want to be in,” Cochrane said. “I want to get to the point where I can fight for the title. I just want to stay active and stay busy. I hate to take a year off. You know me. I used to fight seven times a year. I like to stay active. There will be a possible tournament in January or February they might put me in.”

Cochrane has been a busy guy, but, despite his best efforts, that has not extended to the cage or ring in recent times. On Friday night, at BKFC 15, that will change.

“I got a guy who talks shit,” Cochrane said. “I’d like to shut his mouth up.”