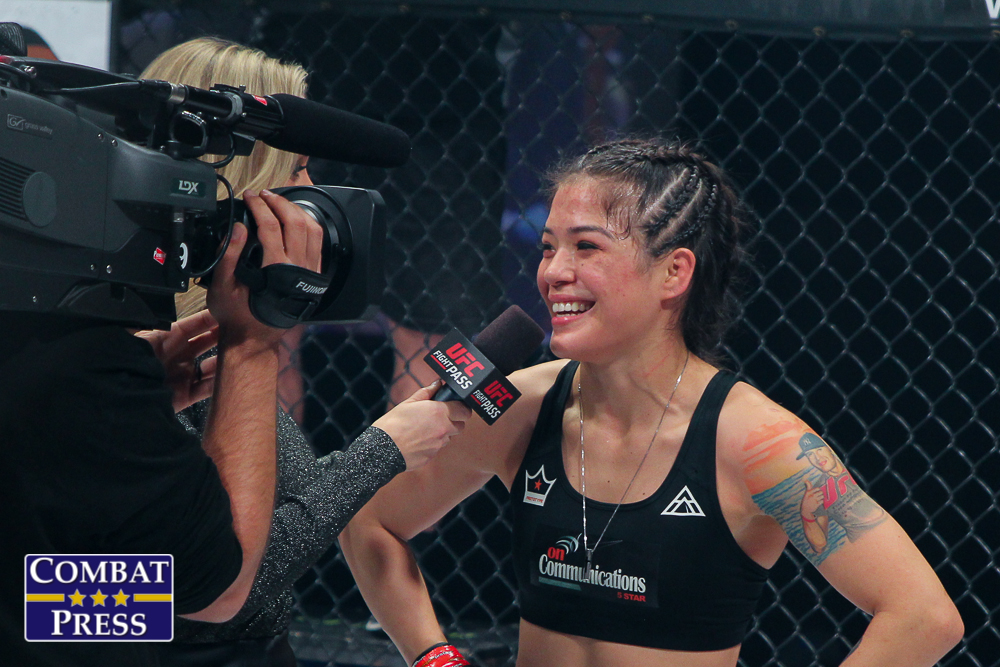 This weekend’s UFC on ESPN+ 37 fight card featured only one female bout, with Tracy Cortez taking on Stephanie Egger. As always, I’m going to go over that one. In addition, I wanted to write about another female bout. My poll for which to break down was won by Karolina Wójcik and Sylwia Juśkiewicz, who clashed at KSW 55, but my choice this weekend was to watch Ansgar Fighting League: Valkyries, as it was an all-female card, which naturally appealed to me. Wójcik topped Juśkiewicz by unanimous decision in Poland, but I’m going to go over the AFL main event, which pitted Micol Di Segni against Audrey Kerouche. Let’s start with the UFC.

Cortez defeated Egger via unanimous decision. There really isn’t a ton to talk about here, though. That’s not because it was a bad or boring contest, but rather because Cortez fought such a beautiful and smart fight. She had a game plan and stuck to it, implementing it perfectly. Each round was the same, for the most part.

One thing we found out after the fact is that Cortez’s corners did not tell her about Egger’s black belt. To some, this might sound strange. I like it, though. I’ll tell you why shortly. First, let’s talk about the fight.

In my preview, I said Egger would look to get it down and be on top. I also said that if she was put on her back, she would be fine with that. I said that while not expecting her to be on her back a whole lot. However, Cortez made it known right away that she wanted it on the ground and wanted to keep it there. Cortez had little trouble getting it there.

Both women were wanting to get it to the ground, but a combination of technique and strength allowed Cortez to get her way. On the ground, Egger is dangerous — more dangerous than Cortez knew, apparently — but Cortez did so well keeping herself out of any dangerous position. She would get the takedowns and immediately get herself to a safe position where she could look for things, be it ground-and-pound or submissions, while in no danger herself. From the little things, like keeping her arms in tight and off the ground, to one-step-at-a-time movements in order to try to pass or improve her position, Cortez did well. When Egger did attempt to go for something, Cortez was great at recognizing it and getting out of harm’s way as well.

Cortez also did things that you might not notice at first glance. For example, in the third round, Egger finally looked to be in a position to get it down and end up in a good position. Cortez was about to be thrown, but she recognized it. Instead of fighting it, Cortez hooked her arms around Egger’s body and used it to help with the momentum, which carried her to where she ended up on top. It was just a beautiful all-around performance by Cortez.

Now, let’s talk about why I liked Cortez’s coaches not telling her that Egger had a black belt. The fight was accepted with Egger as a late replacement. Late replacements give you less time to strategize or put together a game plan. So, they have Cortez, who they feel good about on the ground. They want her to take it to the canvas. Why put any worry in her head? As a fighter, it can enter your head that your opponent is really good somewhere, so you don’t want to make a mistake there. When those thoughts enter your head, it often actually has the wrong effect. It does make you make a mistake, or at least make you fight too “safe.” Cortez didn’t have that fear or worry in her head. Drawing on my own experiences, when someone takes me down and maybe gets on top of me, I can sense any hesitation, where they actually are thinking of a way to avoid me doing something instead of worrying about doing something themselves. This is when I can make my move. If Cortez had any thoughts like that, perhaps Egger could have pounced. So, credit to Cortez’s team for what I thought was a really good decision.

What’s next for Cortez? This one is tough, but how about Yana Kunitskaya? Kunitskaya fought in August, so she and Cortez are on a relatively similar timeline. Kunitskaya is a really tough match-up for Cortez, but it is a really good test to see just where Cortez stands in the division.

Di Segni defeated Kerouche via TKO in round three of this AFL headliner. The bout was for the AFL atomweight title.

In many ways, this bout was the same as the one between Cortez and Egger. It was about Di Segni doing really well with takedowns and Kerouche being unable to stop them or escape them.

In round one, Di Segni got it to the ground. In addition to having no trouble getting it down, she had no trouble advancing to dominant positions. Kerouche stood a bit too upright, which I felt helped Di Segni get the takedowns with so much ease.

After that first round, you could sense that Kerouche was frustrated or confused as to what to do. Di Segni stood with her until she felt it was time to take it down, which helped cause that frustration. Kerouche, I am guessing, was maybe thinking that now she could engage in a striking battle, but that was smart on Di Segni’s part, because the takedowns are easier when the opponent doesn’t expect them.

On the ground, you had to be impressed with Di Segni’s ability to advance. She would get a good position and rain down ground-and-pound. Once Kerouche finally was able to defend or look to escape, Di Segni quickly advanced to a different position and again was back in a place to land hard shots. Di Segni had a great sense of when it was coming, which helped her be ready to move. She was very strong on top, where she set up shop and wasn’t going to be moved. It was just an all-around great performance by Di Segni.

What’s next for Di Segni? It’s hard to answer a question like this for a fight like this one, where the person isn’t signed to one promotion. You don’t know where they will fight next, if they’ll be back to defend their title, or if they are getting the call to one of the bigger promotions, so coming up with who is next is near impossible.