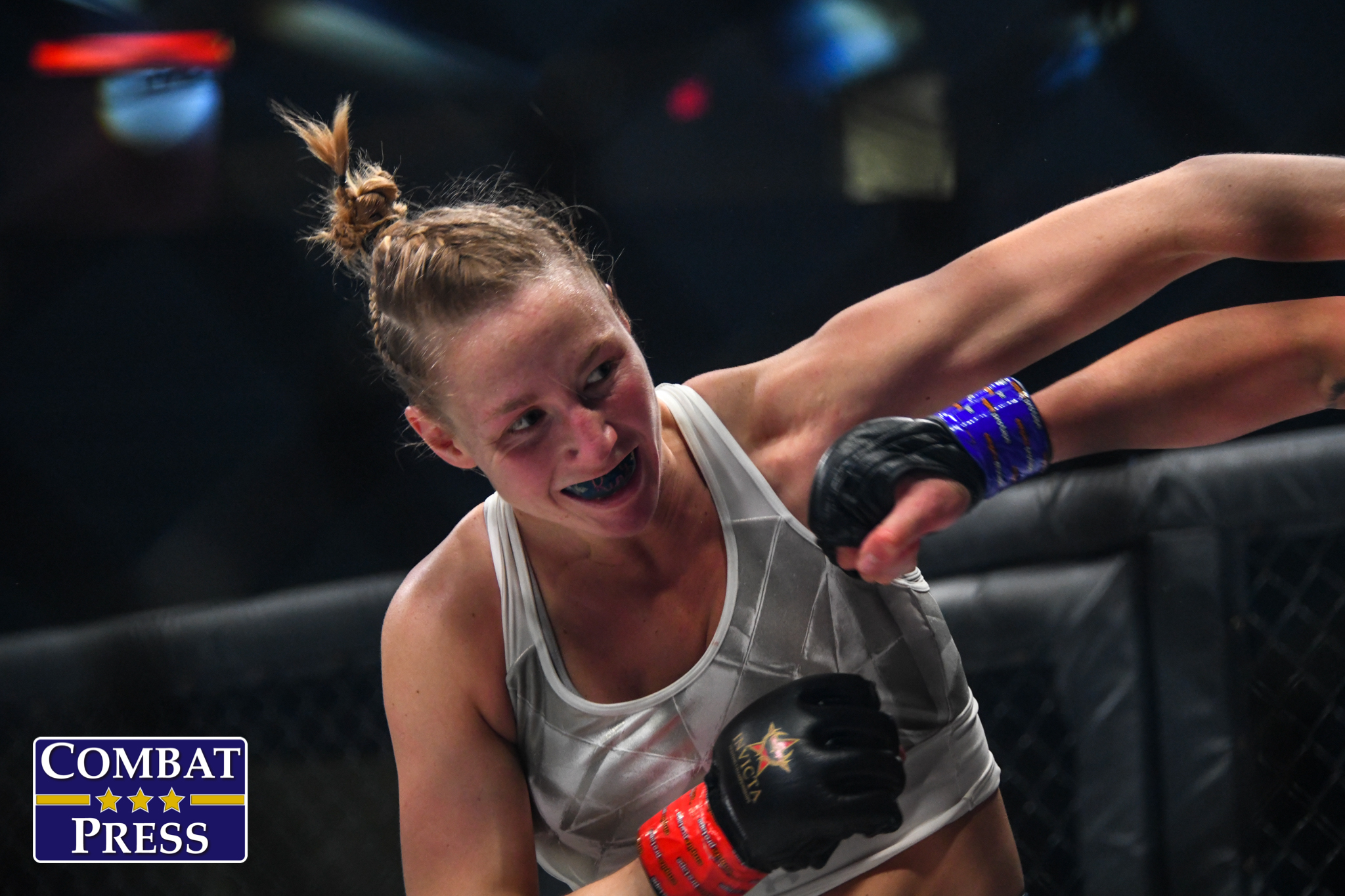 Featherweight fights in the women’s division are far and few between. This is despite the existence of the weight class in the UFC, Bellator MMA and Invicta FC. So, it’s even more impressive when a regional promotion like Fury Fighting Championship books a promising fight between two featherweight ladies. The promotion’s 41st effort goes one step further: the winner will be crowned the league’s inaugural champion in the division. The two title hopefuls are Audrey Wolfe and Courtney King, and you can watch them go for the gold right here on Combat Press.

Wolfe followed three wins at the amateur level with a pro turn in 2018. She debuted with a decision nod over winless opponent Roxanne Ceasear at XKO 39. Her next stop was Invicta, where she fought to a draw with fellow 1-0 prospect Holli Salazar. Wolfe returned to XKO to kick off 2019 with a win over rookie Trinity Williams. The Guy Mezger disciple went on to score stoppages in her two most recent outings. First, she tapped rookie Elizabeth McMullin in the first round at XKO 46. She returned at XKO 47 and scored an 88-second finish of 11-fight veteran Erica Torres.

King had more ups and downs in her amateur career, leading to a 6-3 mark before she went pro in 2017. She made her first professional appearance under the Legacy Fighting Alliance banner, where she stopped Colbey Northcutt, UFC veteran Sage Northcutt’s sister, in the second round via ground-and-pound TKO. Her next appearance came with Invicta and ended in disappointment when she was stopped by Shaianna Rincón’s ground-and-pound strikes. King rebounded at Invicta FC 34 with a second-round submission of the aforementioned Salazar. “The Lion” made a stop with the Fusion Fight League in September and decisioned Gase Sanita.

The records of these two women is indicative of the shallow state of the women’s featherweight division. Wolfe’s opponents held a combined 4-11 mark prior to their meetings with Wolfe, and they now sit at a combined 4-16-1. King’s foes were a combined 2-1-1 and now stand at 4-5-1. King, however, has plenty of notable names on her resume. She defeated Northcutt and Salazar, and she also tangled with Rincón. This far exceeds Wolfe, who fought to a stalemate with Salazar and whose most seasoned opponent held a 3-8 mark coming into their fight.

Wolfe is the undefeated one here, but don’t count out King. Rincón is a tough opponent, and King’s ammy losses all went the distance, including two fights that ended in a split verdict. Wolfe’s takedown attempts tend to come off trips while in the clinch, but she has struggled in the past to produce offense once in top position. Her recent wins indicate that she might be improving on this front, though.

Wolfe will try to close the distance and tie up King in the clinch, but she leaves herself open to take big blows as she tries to grab her opponent. King can answer with flurries and make Wolfe pay in these instances. King is the superior striker, and she just might be able to hand Wolfe her first career loss via knockout.

Combate Americas ends its 2019 campaign with a trip to Peru for its 53rd event. This event features the Copa Combate tournament, a one-night, eight-man gauntlet to determine the next challenger to champion Rafa Garcia and the winner of $100,000. There’s only one undefeated fighter in the field, Argentina’s Lucas Corbage. His quarterfinal bout comes against Mexico’s Jose Luis Verdugo.

The 30-year-old Corbage has been perfect through his first 10 pro fights. He debuted in 2014, but he wasn’t very active until 2016. “Lubera” ended his first five fights in the first round and didn’t go the distance until his seventh contest. The Nova União Argentina product has now seen the scorecards in three of his last four appearances. The other fight in this stretch also ended in the first frame. Corbage has mostly seen subpar competition, but he did submit nine-fight veteran Emmanuel Rozzi with a kneebar.

Verdugo, 35, has had a roller coaster of a career since debuting in 2013. “Dos Lobos” followed a win with a loss to get off to a 1-1 start. After a pair of wins, he again faltered when he collided with Andrés Quintana. The rocky road continued, as the Mexican fighter won just two of his next five. Surprisingly, one of his wins in this stretch came against UFC veteran Estevan Payan. Verdugo found a momentary groove in late 2017 and reeled off three straight wins, but he followed this high note with a three-fight skid that included losses to veterans Anthony Avila and Johnny Case. Again, Verdugo bounced back, this time to notch consecutive victories, including an August win in the Combate cage.

Verdugo’s presence adds some unpredictability to this tournament. While his record suggests a mediocre fighter at best, he does have the ability to show up unexpectedly for a big win. He did so against Payan in the King of the Cage promotion, and he also scored a 2017 victory over 7-1 prospect Alex Velazco. If Verdugo comes in on fire, he could be a true dark horse throughout the tournament.

Corbage’s shiny record holds very little proof that he’ll storm through Verdugo and the rest of this field. The Argentinian has a lot to prove here after mostly feasting on sub-.500 fighters. These tournament fights are one-round affairs, though, which plays to the favor of Corbage, a quick starter. The 30-year-old has recorded six stoppages within the first stanza, and Verdugo has a couple of first-round losses. While Verdugo could end up surprising us, Corbage is likely to march through his quarterfinal opponent.

Rivera is an unlikely champion. He followed a 3-2 amateur campaign with an impressive four-fight winning streak at the pro level, but then fell on hard times. He lost a Legacy Fighting Championship headliner to Steven Peterson and lost four of six outings, including the Peterson fight, while appearing with Legacy, Combate Americas and Titan FC. He righted the ship at Titan FC 53 with a first-round stoppage of Lazar Stojadinovic. This was enough to punch his ticket to a title shot, but his fight with Titan champ Rudson Caliocane was scrapped and Rivera instead fought Matt Wagy for the interim strap. The 30-year-old landed a liver kick in the fourth round to put away Wagy. Caliocane later suffered an injury and vacated the title, so the promotion elevated Rivera from interim status to become the new undisputed champion.

The 26-year-old challenger Sabatello has yet to taste defeat. He debuted in July 2018 with a victory over Ray Paige and then kept on rolling. He won his first two fights by stoppage and now has five first-round victories through six appearances. The former NCAA Division I wrestler has two submissions and three wins via knockout. He earned his title shot with a sub-two-minute finish of Philip Keller.

Sabatello is another undefeated upstart with a lot left to prove. His most significant opponent thus far has been Jeremias Fernandez, the lone fighter to push Sabatello the distance. The wrestler’s other foes combined for a 5-15 mark prior to their encounters with Sabatello. He brutalized all of those fighters, but that was to be expected.

Rivera’s been finished quickly on a couple of occasions, but his recent surge could be a sign that he’s finally put it all together. His opponents in these two fights were battle-tested veterans, too. Stojadinovic had already tangled with the likes of Pat Curran and Donald Sanchez, and he holds a win over the late Jordan Parsons. Wagy had shared the cage with such notables as Ricky Palacios and current UFC fighter Benito Lopez, albeit in losing efforts. Wagy even went on to push Brendan Loughnane for three full rounds in his next fight after the Rivera loss.

Rivera’s record might not be a head-turner, but we can’t dismiss him as a stepping stone for Sabatello. The wrestler will have to earn the victory here. Sabatello has trained with American Top Team and has a strong wrestling pedigree. He should be able to neutralize Rivera with takedowns, but he’ll have to watch out for the champ’s fight-ending power. Sabatello should prove he’s a legitimate up-and-comer, but he’ll have to grind out the decision against a scrappy opponent.