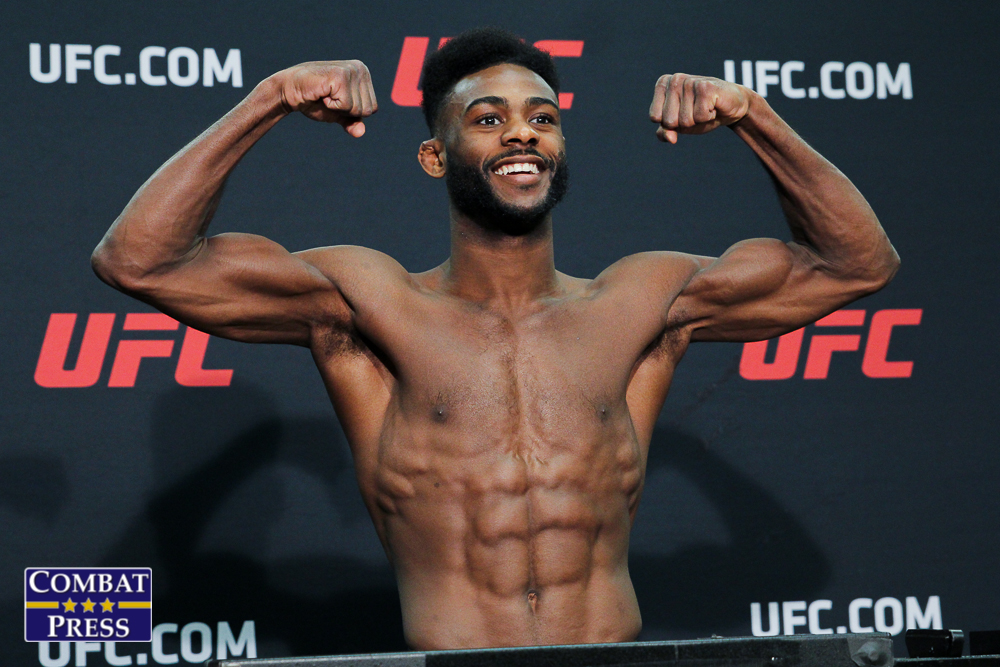 We’re only one month into the new year. With 11 months ahead of us before 2020 is in the books, there’s a lot of MMA action still to come. The UFC’s bantamweight division is a very competitive weight class, with a bunch of hungry contenders chasing after reigning champion Henry Cejudo. So, what does 2020 hold in store for this division? Here are a few predictions:

Aljamain Sterling will get a title shot and defeat Henry Cejudo.

This will be the year of the “Funk Master,” who anxiously sits at No. 2 in the UFC’s bantamweight rankings waiting for his opportunity to have a shot at bantamweight gold against the current champ Cejudo.

Sterling has been a top addition to the UFC bantamweight division since his arrival in 2014. Thus far, he has compiled a UFC record of 10-3. He is now on a four-fight winning streak after defeating Brett Johns, Cody Stamann, Jimmie Rivera and Pedro Munhoz. Sterling currently boasts one of the more impressive streaks in the division and has easily established himself as the primary contender to face Cejudo after Cejudo recently denounced the flyweight title and permanently moved up to bantamweight.

If you have watched Sterling since the beginning of his career, you will notice that he constantly grows and gets better with every performance. Athletic, creative and diverse are just a few adjectives to describe the 30-year-old’s style. He effectively mixes his elite ground game with diverse and unorthodox striking to frustrate his opponents and dictate the pace of the bout. Sterling’s well-roundedness is apparent from his 4.18 significant striking average per minute and his 2.10 takedown average per 15-minute bout. Under the studious leadership of Matt Serra and Ray Longo, the New York-based fighter is certainly the top candidate to fight for the strap.

Cejudo has not fought since winning the title against Marlon Moraes in June 2019. Although there have been whispers that José Aldo might get the next shot at Cejudo, it is very unlikely that this will come to fruition. Instead, the ever-deserving Sterling will fight Cejudo in the first half of 2020. He will rise to the occasion when he finally meets Cejudo and will use his size, athleticism, and consistently evolving skills to defeat the current titleholder and become the new bantamweight supreme.

Petr Yan and Cory Sandhagen will meet inside the Octagon.

It could be for a title-elimination bout or just a fantastic fight for the fans, but this fight needs to happen in 2020. The UFC bantamweight division has become one of the most competitive and exciting divisions in the UFC with the addition of numerous top contenders, which brings us to arguably the division’s two most exciting and competitive combatants in Yan and Sandhagen.

Yan is currently riding a nine-fight winning streak. His last six wins have come in the UFC. The Russian fighter defeated John Dodson, Jimmie Rivera and Urijah Faber in 2019. He trained eight years in boxing, achieving the rank of Master of Sport in the 140-pound division. The 26-year-old upstart isn’t shy to display his diverse striking every time he steps into the Octagon. He is as dangerous as they come, averaging 6.46 significant strikes landed per minute, an 83 percent takedown-defense average, and 1.73 takedowns per bout.

A seven-fight winning streak, an extensive striking background, 8.89 significant strikes landed per minute, 1.64 takedowns landed per bout, and a 1.64 knockdown ratio — these stats, which belong to Sandhagen, are similar to the ones mentioned above for Yan. In many ways, these two men are in the exact same position in their impressive careers, which is why a fight between them makes so much sense. Sandhagen finished 2019 with a 3-0 record after taking out Mario Bautista, John Lineker and Raphael Assunção. He was recently robbed of fighting Frankie Edgar in late January, but the 27-year-old bantamweight contender currently resides at No. 4 in the UFC’s bantamweight rankings and is itching for a chance to get back inside the Octagon against another top contender.

There is not much else to say about these two gentlemen except that a fight between them would be nothing short of fireworks. These two will meet at some point in 2020 as one of them takes the next step toward a shot at bantamweight gold.

Dominick Cruz will return to the Octagon and once again establish his contender status.

With the amount of new arrivals and top contenders quickly filling the UFC bantamweight rankings, it’s easy to forget about the past and how one champion shaped the division for years to come with his established dominance as the UFC bantamweight champion. It’s crazy to think that Cruz officially became the UFC champ back in 2011, when the organization absorbed the WEC, and then defended it against Faber and Demetrious “Mighty Mouse” Johnson. What’s even more shocking is that he returned after a three-year layoff to once again march up the ladder and claim the crown. He defended his belt against Faber yet again before his loss to Cody Garbrandt.

Cruz has certainly had a colorful, yet unpredictable career that has no doubt been plagued by numerous injuries. However, when he is healthy, Cruz is easily one of the most dangerous and frustrating bantamweights any competitor could face. He has not stepped inside the cage since December 2016, but the broadcast analyst has teased his return several times in the last few years.

When Cruz is focused and generally healthy, he averages 3.17 takedowns per bout and uses his slick and unorthodox movement to boast an 83 percent takedown-defense rate and a 75 percent significant-strike defense rate. If you have watched Cruz throughout his career, then you know the only time he’s really been hit is against Garbrandt, who had an incredible performance the night he won the title.

In 2020, Cruz will return to the Octagon against a top-10 opponent and win impressively. The 34-year-old will once again remind fans and the UFC bantamweight roster why he was the “Dominator” for many years of his career.

It’s easy to focus on the top half of an elite division and overlook some of the bottom-half contenders who have quietly been impressive and consistent throughout their Octagon careers.

Do not sleep on Font. Since joining the UFC in 2014, he has compiled a 7-3 record. His three losses came while he was fighting the bantamweight elite. Font possesses a well-rounded game backed by strong striking fundamentals and an underrated ground game. The Massachusetts native is currently riding a two-fight winning streak that consists of unanimous decisions over Sergio Pettis and Ricky Simon. Font has had a couple of opportunities to fight the division’s upper-tier competitors, but he was unsuccessful. In 2020, Font will fight at least twice as he looks to further elevate his current standing as the No. 10 bantamweight in the UFC. He will take the next step, extend his current winning streak, and solidify himself in the top five of the division.

Similarly, Vera will join Font in a group of fighters that will dominate the bantamweight highlights going into 2020 and beyond. Vera joined in the UFC in 2015 and has quietly amassed a 9-2 record. His only two losses in this stretch came to Lineker and Douglas Silva de Andrade between late 2017 and early 2018. Since his last setback, the Ecuadorian fighter has gone on to rattle off five straight wins, all by either knockout or submission. In 2019, he scored a TKO finish of Frankie Saenz, submitted Nohelin Hernandez, and stopped Andre Ewell with strikes. Vera finally got the respect he deserved and was matched up with the hard-hitting Jimmie Rivera for a UFC 247 appearance. Unfortunately, Rivera pulled out of the fight and there has been no update on if the pairing will be moved to another card or canceled all together. Vera will get a top-10 bantamweight foe very soon and extend his winning streak even further.

If you haven’t seen Yadong’s 2019 knockout of Alejandro Perez, you need to track that highlight down. Yadong joined the UFC in 2017 and pulled off an impressive front choke against Bharat Khandare. After getting his first win, the young Chinese prospect decided to move back down to bantamweight, where he continued his winning streak by knocking out Felipe Arantes, outpointing Vince Morales and knocking out the aforementioned Perez. Yadong was matched up with Stamann for a December date that ended in a majority draw. The 22-year-old is currently averaging 4.31 significant strikes per minute, a 1.54 takedown average per bout, a 1.03 knockdown ratio, and an impressive 100 percent takedown-defense rate. The No. 12 bantamweight is slated for a big 2020 as he looks to build on his impressive start in the UFC.

Cody Garbrandt will go on a three-fight winning streak.

Fight fans have waited long enough. Garbrandt has been out of action since March 2019, when he lost to Munhoz in one of the most exciting fights of 2019. Like the aforementioned Cruz, it’s easy to forget how good Garbrandt is after he dropped three straight fights and was out for the remainder of 2019. The return to dominance for Garbrandt begins on March 28 when he faces Assunção in the co-main event of UFC on ESPN 8.

Garbrandt put on a masterful performance against Cruz to win the title. He used his crisp boxing, steadfast head movement, and a 100 percent takedown-defense rate to get the job done. Garbrandt dropped Cruz multiple times and used his exceptional knowledge of distance to neutralize Cruz’s impressive footwork. Unfortunately, Garbrandt lost to T.J. Dillashaw twice for the belt, only to find out that the champion had been using banned substances to elevate his performance.

Garbrandt isn’t done. The 28-year-old former champ will return to form in March and fight at least twice more in 2019 to regain his contender status and rightful place as a member of the bantamweight elite.