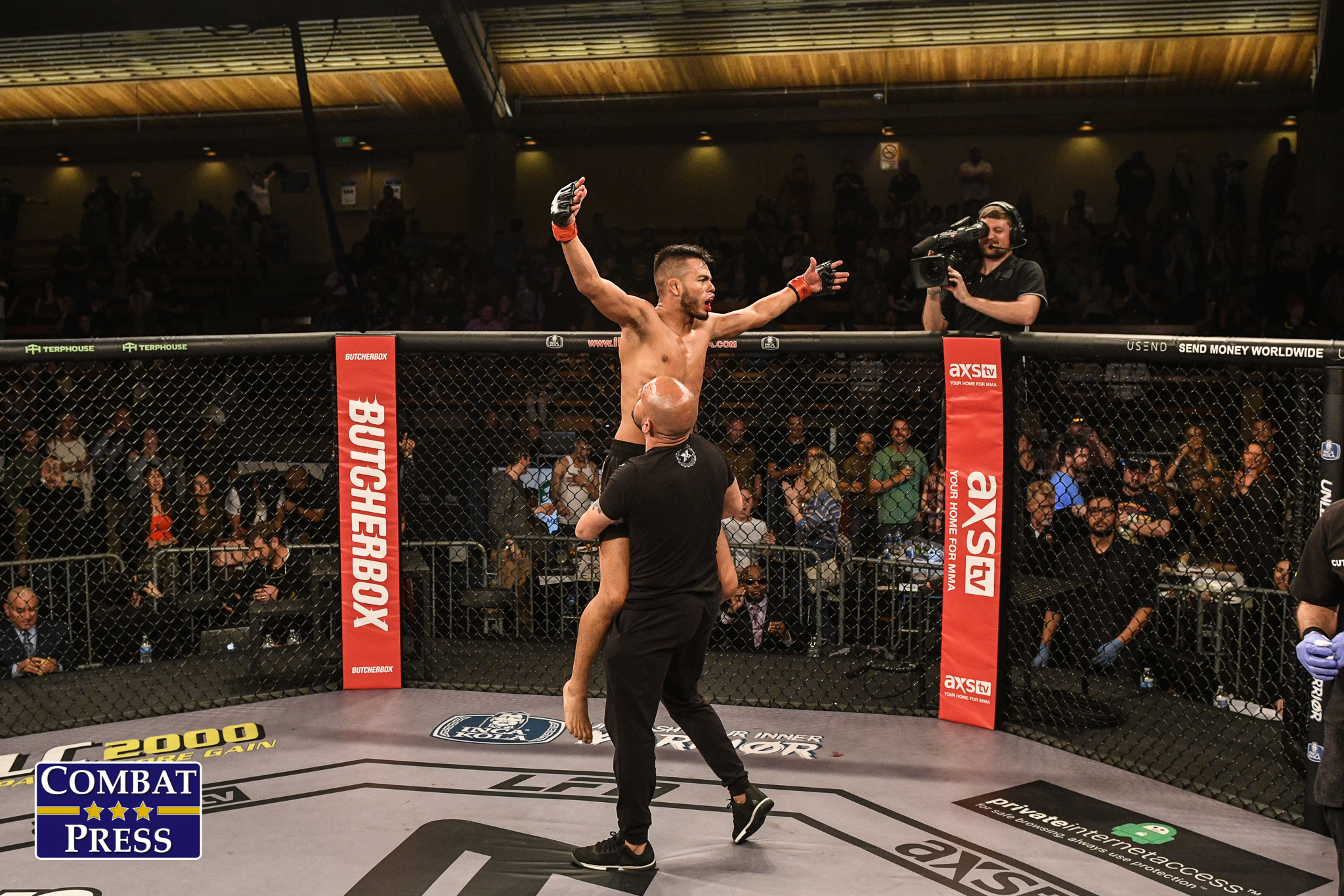 One of the most difficult opponents a fighter can face resides in his own head. While an emotional fighter can be entertaining, he can also be his own worst enemy.

Anybody who has watched flyweight Brandon Royval fight knows that he wears his heart on his sleeve. He’s an exciting fighter, to say the least, and as he matures in his career, he has gotten better about controlling what’s going on in his head. The benefits came front-and-center when he scored a first-round submission over UFC veteran Joby Sanchez at Legacy Fighting Alliance 65 in Vail, Colo., in May.

“I’m kind of a spaz a little bit,” Royval told Combat Press. “I’m always going full-on. Some fighters need to hype up, and some fighters need to calm down. I definitely need to calm down before I go out there, because I’m going to go psycho. One thing that happened is that my coach did a really good job of neutralizing my emotions and keeping me focused on what I was going to do out there.”

One of Royval’s most emotional victories came the previous year at LFA 39, also in Vail. Less than a minute into his fight with Jerome Rivera, he was pressing Rivera back toward the cage when Rivera stuck his arm out to catch himself and dislocated his elbow. The injury looked gruesome, but it was an easy heal for Rivera. That fight had a lot of hype behind it, so the abrupt ending was not ideal for the fans watching.

The LFA had a rematch all teed up for the original LFA 78 card, which was supposed to take place on Oct. 4 at the 1STBANK Center in Broomfield, Colo., but this time the stakes were much higher. The two were set to meet in the main event for the vacant flyweight title. However, the LFA had to postpone the event due to an abrupt end to their broadcast partnership with AXS TV. The fighters found out a little more than a week in advance.

“I was super heartbroken,” Royval admitted. “I’ve never had such a good camp in my whole life. I had never felt so great and had such a great camp. Everything was perfect. Nothing went wrong right until that moment I found out I wasn’t fighting.”

A fight cancellation, especially on short notice, is devastating for any fighter. Royval was so hyped for the prospect of a rematch with title implications, but all of it went away in the blink of an eye. However, it was later announced that the LFA entered into a new broadcasting partnership with UFC Fight Pass. Royval was now set to appear on the LFA 79 card, which takes place this Friday night at the same venue. However, the location of the bout is about the only thing that has remained the same.

“This camp has been a bit of a shit show, as far as my body and things going on with me,” Royval explained. “Mentally, I stay sharp and ready, but, between that fight not happening and right now, there has been so much dramatic shit that’s happened, including up until five minutes ago. Another bomb got dropped on me about this fight. My life has been chaotic. I’ve had four different opponents and a relationship change. Everything’s happened, but I haven’t missed a goddamn practice. I’m just doing what I need to do.”

Rivera was dealing with an injury, so he had to pull out of the fight. When Royval first accepted the bout for LFA 78, he was also dealing with a foot injury.

“The day I accepted that fight, I was in a boot,” Royval said. “I had injured my foot at work, and the only thing I could do at the gym was boxing. There’s nothing you can do with a broken foot. I went running, because there was an emergency situation, and I stepped wrong and fractured my foot. I took my shoe off and took a bit of a nap, and when I woke up, my foot was swollen.”

Regardless of what was going on with Royval’s foot, he was still ready to go, which made it all the more frustrating when his opponents for the postponed card started dropping like flies. In addition, he and his girlfriend of almost a decade broke up during this camp.

The latest man to withdraw from the fight was Jared Scoggins, who Royval heard was out within minutes of the time of this interview. He was replaced by Nate Williams, who, barring any more weirdness, Royval will face for the belt on Friday.

After the events of the last couple months have unfolded, Royval will have a tough time keeping his emotions in check as he headlines LFA 79. However, he is an exciting fighter with nothing to lose. He’ll take out his frustrations on Nate Williams and seek to emerge with the title.