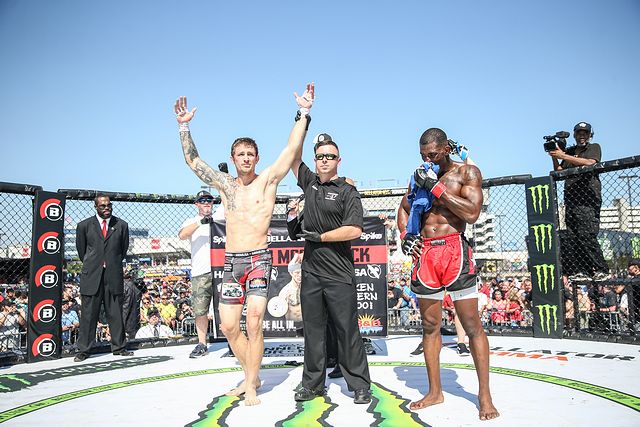 LFA 72’s Jacob McClintock: The Journey Back From Addiction

It only takes one. One drink. One hit off the pipe. One pill. One spike in the arm.

“A lot of times, people don’t really see the other side of this sport,” MMA veteran Jacob McClintock told Combat Press. “In this sport, people are strong in the sense that they don’t let shit fuck with them. A lot of times, they keep things in. And, with this sport, it’s hard when you can take a pill, and it takes your pain away, so you can train for that night. What people don’t understand is that one little pill leads to one the next night, and the next night, and the next night, and then, all of a sudden, you look back and realize that you are addicted to this and you can’t get them anymore. Now, you’re looking for heroin because heroin’s 10 times cheaper, and it gets you way more fucked up. That, and the alcohol. It’s a fucked up thing, because you don’t really understand where you are at until it’s too late.”

McClintock has been training as a fighter for over half of his life. In 1999, his dad introduced him to the old Ultimate Fighting Championship videos on VHS. He was growing up in Yuma, Ariz., at the time. He really enjoyed watching the sport as a child, but there weren’t any gyms in the area.

“I moved to Phoenix in 2001, and within a month, we found a flyer at Hooters or something like that about a cage fight,” McClintock explained. “We ended up going, and that was a Saturday night. That next Monday, I was signed up at a gym, and that’s it, man. Since grade school, I always had a knack, I guess, for getting into fist fights. From kindergarten to sixth grade, there were three fights total in my grade school, and I was in each one. I don’t know what it was. Team sports were never really my thing — I noticed that you can blame everything on your teammates — but, with MMA, wrestling, boxing, these combat sports, it comes down to you, and there aren’t any excuses. I really enjoyed that side of it.”

McClintock, now 31, was just a teenager when he first got into MMA. A lot of life has happened since then. He started training in December 2001 at a gym that he would rather not name. The following year, he jumped over to Arizona Combat Sports, where he was training under Trevor and Todd Lally. He also had the opportunity to train with guys like Ryan Bader, C.B. Dolloway and Aaron Simpson. McClintock made his pro debut in 2007, which marked the opening of a 6-0 start in just two and a half years. However, his successful MMA career was running concurrent with some serious addictions.

“Since I’ve been about 13, I had drug and alcohol problems,” McClintock admitted. “My whole family are alcoholics, and they have a lot of issues. I went from drinking beer to doing coke, smoking meth, doing pills — Oxycontin, Xanax — to doing heroin. Pretty much anything you can think of, during my career as a fighter, all of that, I have done.”

It’s hard enough to be a pro fighter while maintaining a normal life, let alone an addiction. Ten years ago, McClintock had a daughter, but he was deep into a pill addiction. He had back-to-back fights in Bellator in 2010. He suffered his first loss in round one of his Bellator 15 outing, and he followed that up with another first-round loss at Bellator 30 only five months later.

“Both of my Bellator fights back in 2010, two weeks before the fights, I spent withdrawing from Oxycontin, Xanax, shit like that,” McClintock said. “The one thing that has kept me from going too far — going to jail, committing murder, things like that — has been the thought of jiu-jitsu and fighting. If it wasn’t for this stuff, I would probably be dead, lying in a ditch somewhere with a needle in my arm.”

McClintock, a Brazilian Jiu-Jitsu black belt under Gustavo Dantas, got back in the win column with back-to-back victories in 2012. He was still struggling with addiction, though, and the injury bug struck in a grappling event later in the year.

“A guy landed on the side of my knee,” McClintock said. “I had an MCL and ACL tear. I pretty much gave up on my career. My uncle owns a land-surveying company in Alaska. I went to Alaska and worked with him for a few months, and one of my buddies, John Moraga, who was still a UFC fighter, called me and said he knew some people looking for a jiu-jitsu instructor out in Charleston, S.C. I ended up working that out, and went out there for six or seven months. I didn’t end up really getting along with the new owner of the gym, and I ended up leaving that and opening up my own spot. That was about three or four years ago.”

McClintock’s spot is called Tick Tock BJJ. He trains all levels of martial artists at his gym. He finally got back on his feet, too. He got clean off the drugs and now has time to focus on his MMA career again. He still does his camps in Arizona, where his daughter lives.

“It’s not easy,” McClintock said. “With her living on the west coast and me living on the east coast, I’m still trying to have a relationship with my kid, but it’s definitely a struggle. I’ve got to do what I need to do to support myself and her. I don’t want her to do what I have to do.”

The Arizona native made it back to the cage after five years. He submitted Jeremie Holloway at the Bellator MMA Fight Series in May 2017. His next fight took place a year ago, when he lost to Brandon Bell at Road to M-1 USA.

“After the last fight, I took some time off and did some soul searching and shit,” McClintock said. “I just started training, and I talked to my manager. He said there were a couple fights happening in Phoenix in 2019, if I wanted him to get me on a card. I wanted to come to Phoenix, take care of some stuff, and see my kid. It just worked out.”

On Friday night, McClintock is set to make his Legacy Fighting Alliance debut. He faces Raymond Pina at LFA 72, which airs live on AXS TV. Pina is 8-3 as a pro and scored a knockout win in May in his first fight in almost three years.

“My whole perspective on fighting is that my preparation on myself has to be focused on me,” McClintock explained. “I don’t want to sit here and focus on what he’s going to do. It’s what am I going to do. I know he’s a high school wrestling coach and stuff, and I don’t have anything bad to say about him.

“I’m a black belt in jiu-jitsu. I have decent wrestling for not being a wrestler, and half of my wins are by knockout. I’ve got a good 50-50 balance between stand-up and ground, and I’m comfortable in any position. I know he’s a wrestler, so most likely, he needs to get it to the ground.”

The fight against Pina is another step in a long road back for McClintock. He doesn’t view traditional treatment programs as a useful resource. His career and his daughter are all he needs to drive him to stay clean. This has caused him to alter the status of some friendships.

“This type of sport, and the camaraderie, has allowed me to better myself, not just for me and my kid, but for everybody else that has believed in me throughout my career. I’m trying to better myself to prove that those people were not putting all of this time and effort into [me] for no reason.”

McClintock’s journey continues. He doesn’t know where his career will take him, but he knows he owes it to a lot of people, including himself, to stay clean and keep moving forward.

“I’m doing this for myself,” he concluded. “It’s something I need to do. I can’t walk away from this. Right now, I’m taking it one fight at a time. This game is a fickle bitch. You’re on top of the world one night, and the next night, people are talking shit about you. I’m putting all my balls in one basket and giving it everything I can.”