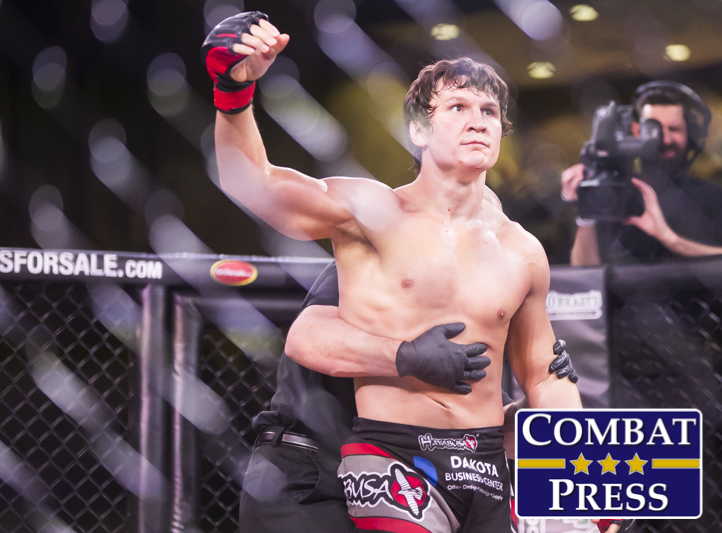 Front Street Fights isn’t a very well-known organization, but it has put on fights as far back as 2014. The company stays local in Boise, Idaho, and is a fixture at the city’s Centurylink Arena. Its cards have featured the likes of Steven Siler, Vince Morales, Yoni Sherbatov and Veta Arteaga. Light heavyweights Carl Dieckmann and Emillio Trevino could be the next fighters to use FSF as a springboard to bigger things.

In fact, Trevino has already had a taste of the bigger show. After an undefeated four-fight run at the amateur level and two wins with FSF, “The Jet” appeared opposite Sua Tuani at Bellator 205. The 23-year-old destroyed Tuani with punches in the second round to up his perfect record to 3-0. Trevino has been a consistent finisher throughout his career, and his only fight to go the distance was his pro debut. While the decision nod came against a fighter far below the .500 mark, Trevino has gone on to hand his two most recent foes their first pro losses.

Dieckmann is a 14-fight veteran, giving him far more experience than anyone Trevino has fought thus far in his budding career. The 28-year-old has been competing at the pro level since 2011. He kicked things off with five straight wins. He suffered his first loss via armbar against Zack Harvey. After reeling off three more wins, Dieckmann was handed another setback, this time by veteran Michael Arrant. After an additional three wins, he went inactive for three years while recovering from a broken fibula and tibula he sustained while playing football. The Utah-based veteran finally returned in early 2017 with a loss to Ed Whitmore, but that counts as his only recent appearance.

There was a time when Dieckmann seemed like an up-and-comer with UFC potential. Now, he’s taking the gatekeeper role against Trevino. Dieckmann has suffered all of his losses via stoppage, and Trevino is one hell of a finisher. This is also Dieckmann’s first fight at 205 pounds after a career spent at middleweight and welterweight. All signs point to this as another signature win for Trevino’s resume. Trevino should keep this fight standing — Dieckmann specializes in submissions — and eventually land a knockout blow.

Other key bouts: Drew Brokenshire (18-9) vs. Andrew Cruz (4-3) for the featherweight title

Veterans David Michaud and Christian Aguilera may be the headliners of Legacy Fighting Alliance’s 59th show, and former UFC fighter and two-time The Ultimate Fighter alum Seth Baczynski is featured as well, but our attention is drawn to the unblemished record of co-headliner Steven Newell, who is set to meet fellow welterweight Jared Gooden when the LFA heads to Phoenix.

The 27-year-old Newell sports a perfect mark, but he’s also been on the sidelines since 2016. “Relentless” went 7-2 as an amateur before turning pro in 2014. In just over two years, he quickly racked up his nine wins, the most notable of which came against 16-8 veteran Ranieri Zenidim as part of a one-night tournament in which Newell collected two of his victories. The Astra Fight Team product has three submissions and two knockouts on his resume, but he’s gone the distance in his last four fights. He steps in to replace Kyle Stewart as Gooden’s opponent after Stewart departed for the UFC.

Gooden put together a 6-1 campaign as an amateur before joining the pro ranks in 2015. The 25-year-old won his first six fights and then hit a rough patch where he lost two out of three outings. Those losses came when “Nite Train” stepped up to fight the likes of Bellator veterans Dave Vitkay and Julien Williams, but he also notched his lone win in this span against WEC veteran and The Ultimate Fighter 14 alum Micah Miller. After the loss to Williams, Gooden’s level of competition dipped for a few fights, but he picked up the National Fighting Championship welterweight crown during this time. He’s gradually increased his level of competition again to take on the likes of Ladarious Jackson and then Cody Wilson. Stewart would have been another huge leap up, but even Newell is a significant challenge for the prospect.

Of course, Newell’s time away from action is the biggest unknown in this contest. Will he enter this fight with a lot of rust, or can he pick up where he left off? Newell was a capable finisher early in his career, but he’s had to earn his victories with the judges more recently. The two victories in a single night were impressive, but only the aforementioned Zenidim was a truly tough fight for the American-born fighter.

Gooden has the momentum of a five-fight winning streak that includes three knockouts and a submission. While Gooden has struggled against many of the better fighters he has met, he was able to decision the aforementioned Miller and also gave future Cage Fury FC and LFA fighter Tanner Saraceno a rude welcome to the pro level. Stewart would have been a tough task that Gooden would likely not have survived, but Newell is a far more reasonable ask. Newell is coming off a lengthy layoff and probably isn’t ready to dive this far into the deep end of the LFA pool. Gooden should be able to continue his streak and hand Newell the first loss, likely by knockout, of his pro career.

The women’s divisions tend to feature far less depth than the men’s weight classes, which is why we tend to take notice whenever a notable fighter is slated to compete. In this case, that fighter is Iony Razafiarison. The Bellator veteran returns to action at European Beatdown 5 against Clara Ricignuolo in a fight that can be watched right here on Combat Press via Fite TV..

Razafiarison has bounced around various weight classes, going as high as featherweight and as low as flyweight, where her last two fights were contested. Now, the 34-year-old heads to the bantamweight division. The French fighter debuted in 2013 and scored victories in her first two outings. She suffered her first defeat as a featherweight under the Bellator banner when she lost to Bryanna Fissori by way of decision. Her next Bellator appearance came in early 2017 at a catchweight of 140 pounds against Sinead Kavanagh, and this time it was Razafiarison who emerged with the judges’ nod. Then, she dropped to flyweight and added wins over Diana Belbiţă and Karla Benitez.

Muay Thai practitioner Ricignuolo made her pro debut in early 2017. She secured victories over Lucrezia Ria and Petra Částková, but her fortunes took a turn when she met Valérie Domergue at European Beatdown 2. Domergue handed Ricignuolo a decision loss. Next, the RingSide Lyon export fell on the scorecards to Veronika Rodová. Unlike Razafiarison, Ricignuolo has steadily fought as a bantamweight throughout her career.

This should be a showcase fight for Razafiarison. She’s spent most of her career fighting notable opponents, and she’s fared well against all but one of them. Her loss can be dismissed as a case of the Frenchwoman competing in the wrong weight class. She was just a tad over the bantamweight limit for her encounter with Kavanagh, and this might finally be the happy medium between the cut to 125 and a career as an undersized featherweight.

The young Ricignuolo hasn’t really flashed much to suggest she can upstage Razafiarison. She has suffered her losses to a .500 fighter and a 2-1 opponent. Her fight with Rodová was yet another example of Ricignuolo fighting wild and with her hands low. She connected with plenty of strikes, but she absorbed even more. She’s also willing to go for throws that put her in bad spots. Razafiarison is a strong wrestler and grappler who will easily take advantage of Ricignuolo in those situations, and she’s also more than capable of changing levels on Ricignuolo and scoring the takedown. Razafiarison should dominate her opponent on the mat and deliver a submission finish.