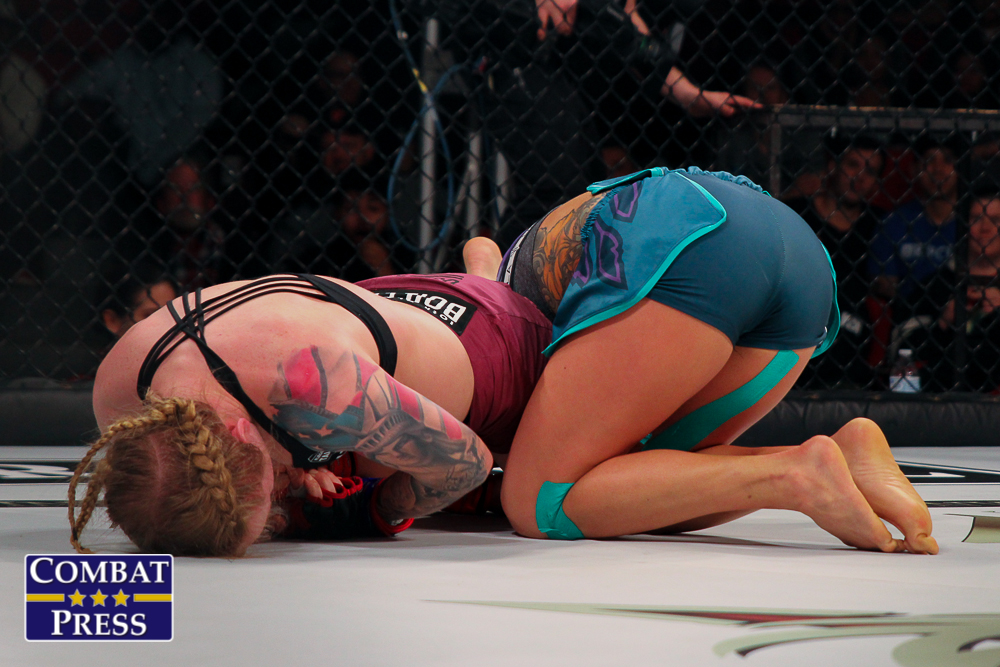 Domination. It happens in MMA all the time. One fighter controls a bout from start to finish and cruises to an easy decision victory. Some fights can appear to be a sure thing for a fighter. They’re out-dueling their opponent on the feet or smashing them with takedown after takedown to control the ground game. They might have their opponent staggered and one blow away from a knockout. Yet, just when it seems like there’s no way for the other fighter to win the contest, something crazy happens. It can be soul-crushing for the loser, who thought they had the fight in the bag. The winner, meanwhile, has pulled off the seemingly impossible.

Take Derrick Lewis, for example. “The Black Beast” wasn’t faring well in his UFC 229 title-eliminator affair with Alexander Volkov. The tall, lanky Russian wore away at Lewis for much of the first round. The second round and most of the third round featured Volkov in control. He’d occasionally throw flurries or come close to overwhelming Lewis, but “The Black Beast” continued to survive. Then, in the closing seconds of a contest where Volkov was clearly on his way to a lopsided decision win, Lewis connected with a big overhand and clobbered Volkov with follow-up punches on the mat to score the win.

Standout Mexican featherweight Yair Rodriguez kept his fight with “The Korean Zombie” Chan Sung Jung much closer. Rodriguez and Jung engaged in a back-and-forth battle through the first four rounds of the five-round contest, but Jung appeared to hold the advantage on the scorecards. “The Korean Zombie” used volume striking to edge his counterpart for most of the fifth round, but the Mexican star wouldn’t fall. Instead, with the clock winding down, Rodriguez threw a creative elbow strike that removed Jung from consciousness. Rodriguez had a knockout win in a fight he likely would have lost if it had gone just a few more seconds and made it to the judges.

While both of these fights highlight amazing comeback efforts, they pale in comparison to what happened at Invicta FC 33.

The knockout is always available to a fighter who throws bombs or utilizes creative striking techniques. All it takes is one punch. By comparison, it’s far more difficult when getting dominated to maintain one’s composure and remain alert enough to spot a submission opportunity. It’s even more difficult when the person in question is still a teenager and has been sent airborne by their opponent, who had already smothered them with wrestling for more than 14 minutes.

This is what makes Kay Hansen’s victory over fellow strawweight Sharon Jacobson so impressive. Jacobson appeared to be establishing herself as the frontrunner for a crack at Invicta’s 115-pound titlist Virna Jandiroba. She was absolutely dominating the 19-year-old Hansen with takedowns and wrestling throughout the first two-plus rounds of their contest. Hansen simply had no answer for Jacobson. She wasn’t on her feet long enough to establish her striking game, and she was outclassed by Jacobson on the mat.

With less than 20 seconds remaining on the clock, Jacobson made a huge mistake. Instead of being content to clinch Hansen against the chainlink for those last few ticks, Jacobson attempted to suplex Hansen for one final takedown. It was to be an emphatic ragdolling of Hansen to put a stamp on Jacobson’s win. Instead, the throw turned into a bizarre reversal in which Hansen snagged Jacobson’s arm as the pair crashed to the mat. Hansen immediately cranked on Jacobson’s limb, forcing the presumed winner to instead tap out in defeat.

The stunning end to the contest earns our 2018 Combat Press “Comeback of the Year.”