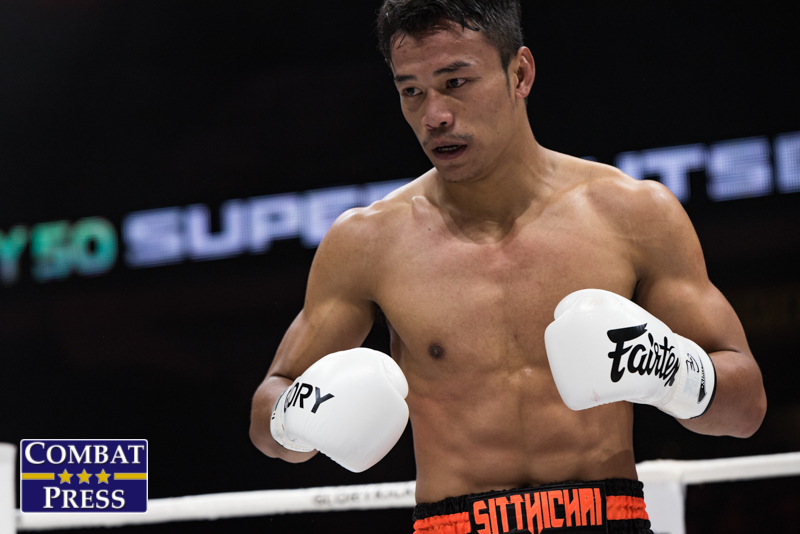 On Friday, Nov. 2, GLORY Kickboxing holds its 61st event from the Hammerstein Ballroom in New York.

In the night’s headliner, the world’s best kickboxer, Sitthichai Sitsongpeenong, puts his lightweight title on the line against a familiar foe, Josh Jauncey. The pair met previously in 2015 at GLORY 22 in Lille, France. Thailand’s Sitthichai was making his promotional debut that night and defeated Jauncey on the scorecards. Sitthichai has gone 22-2 over the last three years. Meanwhile, Jauncey went on to face a gauntlet of the division’s elite and emerged with mixed results. The 25-year-old Canadian has righted the ship recently by scoring massive wins over Stoyan Koprivienski and Christian Baya to earn a crack at gold.

Gold is also on the line in the night’s co-headliner, where Jady Menezes attempts to defend her crown against the world’s best female kickboxer, Anissa Meksen. The pair met previously at GLORY 56 in Denver, where Brazil’s Menezes left the ring with one of the most controversial decisions in GLORY history. Meksen now seeks revenge after the unexpected outcome of the pair’s first encounter.

Josh Jauncey gets a chance for redemption against GLORY lightweight titleholder Sitthichai Sitsongpeenong. This is Jauncey’s first opportunity to fight for a major world title. Can he knock off the world’s best kickboxer?

Sitthichai has been the most dominant force in kickboxing for the past five years. After transitioning out of the stadiums in Thailand, he began competing more and more under kickboxing rules. His skill set translated well to the kickboxing ring. Since making his kickboxing debut in 2013, Sitthichai has won 41 of his 44 fights. He’s currently riding a nine-fight winning streak and is once again in the running for the Combat Press Kickboxing “Fighter of the Year” award, an honor he also earned in 2015. The champion puts his title on the line for the sixth time when he takes on Jauncey, who was a highlight on Sitthichai’s award-winning 2015 campaign.

The 25-year-old challenger has traded wins and losses in the GLORY ring since his first meeting with Sitthichai in the finals of the lightweight contender tournament at GLORY 22. Jauncey picked up victories over Jordan Tkac and Antonio Gomez in the wake of his failed title bid. However, he went through a brief rough patch against top fighters Giorgio Petrosyan, Anatoly Moiseev and Chris Baya. Jauncey hit a massive roadblock when he was upset by undefeated American Elvis Gashi at GLORY 43 in New York. However, the Canadian has gone on to pick up hard-fought decision victories over ranked GLORY fighters Stoyan Koprivienski and Chris Baya.

In their first meeting, Sitthichai was able to control the center of the ring, the pace of the fight, and the flow of the exchanges. He commanded the center of the ring in the open-stance battle. Jauncey is capable of fighting successfully from the outside, but it often wasn’t the Canadian’s own choice against Sitthichai. Jauncey tried to turn up the pressure multiple times throughout the fight. However, Sitthichai’s excellent head movement, distance management, counter ability and incredible skill set made it difficult for Jauncey to land significant offense. The fight featured some ebbs and flows, but the experienced Thai made it clear who was winning the bout with his ultimate weapon, the left middle kick.

That kick is a continuous theme in all of his fights. He is able to cripple and stop his opponents with an onslaught of kicks to the body, which usually opens up his other offense. A huge part of Sitthichai’s success is his ability to dominate fights with that kick, but this doesn’t mean it’s the only weapon his opponents need to fear. Sitthichai is like a matador in the ring. He commands distance with his jab, teep kick, step knees and clinch work. He forces his opponents to overextend, over-commit and put themselves in danger of his effective counter striking.

Jauncey is an excellent fighter who won’t shy away from an exchange. He works at a fast pace and is able to diversify his attack depending on his opponent. His best chances for dethroning the king are his right hand lead, low kicks and knees inside.

It’s a difficult task to take down Sitthichai’s defense, because the Thai fighter is so consistent in his approach. There have been rare moments where Sitthichai looked like an average fighter in the past. However, he hasn’t been knocked out in over a decade, which means Jauncey will need to remain consistent over the course of five rounds. Unfortunately for Jauncey, Sitthichai works at a high pace that most fighters cannot match over 15 minutes. Jauncey will make it a fight, but it won’t be enough to take the crown from Sitthichai.

Following the controversial decision in her fight against Jady Menezes at GLORY 56, Anissa Meksen gets a chance for redemption in an immediate rematch. Can Meksen right the judges’ wrong?

The kickboxing faithful reacted strongly to the disastrous scorecards in the pair’s second meeting. The fight played out similarly to their first meeting at GLORY 43. Menezes, willing to take three shots to land one, was pressing forward with reckless abandon. Meksen was working on the outside and using her footwork to get in and out unscathed while landing her diverse array of punches, kicks and knees. After five rounds of action, two of the three judges gave Menezes the victory 48-47. The dissenting judge scored the fight 50-45 and gave Meksen every round during the championship bout. The latter scorecard seemed to be the consensus among kickboxing fans, too. Many media members and knowledgeable fans called the decision one of the worst in years.

Meksen was devastated. She rushed out of the ring and quickly left the venue in disgust. The decision wasn’t investigated or reviewed. However, the promotion sought to make amends by giving the dominant former champ another crack at the belt.

Meksen is a 100-fight veteran with 96 wins in her illustrious career. Her loss against Menezes snapped an 18-fight winning streak dating back to 2015. Meksen has been consistently one of the greatest female fighters on the planet, regardless of the combat sport. As the challenger, Meksen will be a heavy favorite heading into the rubber match with Menezes.

The victory for Menezes was so shocking because of the disparity in experience. The 26-year-old has won 13 of her 15 pro bouts. She trains out of Team Hemmers Gym in Curitiba, Brazil, under head coach Julio Borges. Her game is a blend of Dutch-style kickboxing and an aggressive Muay Thai style from Chute Boxe. Menezes is a pressure fighter with tremendous heart, toughness and the ability to keep pushing the pace round after round. She has the traditional boxing-to-low-kick game that most Dutch kickboxers employ, plus a Terminator-esque attitude to apply it despite facing resistance. However, her game is fundamentally flawed. Menezes struggles to move her feet. She often finds herself eating unnecessary punishment, and her style is easily figured out.

Meksen is a dynamic fighter who can fight from either stance. She can counter effectively while moving forward or backward, and she throws a diverse offense. Meksen has shown her skill consistently over the past decade by compiling one the best resumes in kickboxing, including wins over Tiffany van Soest, Iman Barlow, Ashley Nichols, Amel Dehby and many others. The 2017 Combat Press “Fighter of the Year” is a textbook of technique. She knows how to fight in every range and against multiple different styles, and she can adapt her game based on how the fight unfolds.

The series is technically tied between Menezes and Meksen. However, Meksen will showcase why she’s the top-ranked female kickboxer on the planet with another one-sided decision victory over the Brazilian.