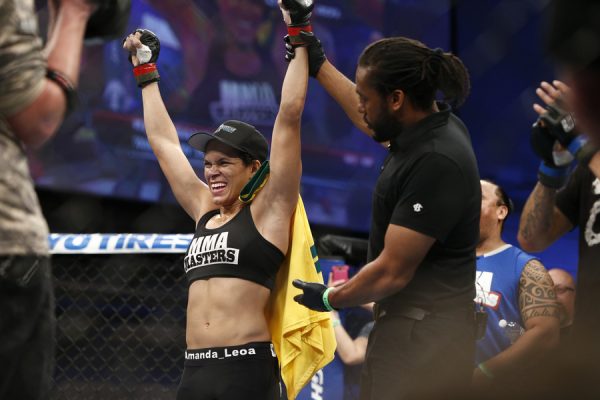 Dropped from the rankings: Ediane Gomes (8)

Due to inactivity, Ediane Gomes drops from the rankings. Olga Rubin scored the biggest win of her career when she upended UFC veteran Cindy Dandois at Bellator 209 in Israel. Rubin jumps into the No. 8 spot. At Invicta FC 32, Felicia Spencer captured the promotion’s vacant featherweight championship when she impressively defeated Pam Sorenson. The victory solidifies Spencer as a top featherweight at a young age, but she remains in the fifth spot in the rankings. To close out 2018, two top 145-pounders will be in action at UFC 232. Cristiane “Cyborg” Justino takes a superfight in the co-main event of the card opposite UFC bantamweight champion Amanda Nunes. Former Invicta champ Megan Anderson will also fight on the card. The Aussie takes on Cat Zingano, a bantamweight moving up to the featherweight division.

Dropped from the rankings: Yana Kunitskaya (10)

After a long layoff from the bantamweight division which forced her to vacate her ranking, Germaine de Randamie moves back into the second spot with her return in November. She defeated fellow top-10 fighter Raquel Pennington at UFC Fight Night 139 to become a top contender for the belt currently held by Amanda Nunes.

Dropped from the rankings: Roxanne Modafferi (10)

Sijara Eubanks pokes her head into the top 10 courtesy of a win over Roxanne Modafferi at UFC 230. She needs to prove more consistent when weigh-in time comes, but nevertheless, the brash flyweight has proven to be a tough fighter who is wiggling her way into the title picture. To close out 2018, a number of top fighters will be in action. Top-ranked Valentina Shevchenko will vie for the vacant UFC flyweight championship when she takes on former strawweight champ Joanna Jędrzejczyk at UFC 231. On the same card, Katlyn Chookagian and Jessica Eye will battle it out in hopes of securing the No. 1 contender spot within the company. Elsewhere, Bellator titleholder Ilima-Lei Macfarlane takes on a tough test in the form of UFC veteran Valérie Létourneau.

A quiet November for the strawweights will give way to a December in which just one ranked fighter will be in action at 115 pounds. Claudia Gadelha has a date with Nina Ansaroff at UFC 231. No. 2-ranked Joanna Jędrzejczyk ventures up to the flyweight division for a title fight against Valentina Shevchenko.

Dropped from the rankings: Herica Tiburcio (4)

Ashley Cummins, who scored a huge win over formerly undefeated prospect Jessica Delboni at Invicta FC 32, climbs two spots up in the rankings. Former Invicta champion Herica Tiburcio, formerly ranked fourth, drops from the rankings due to inactivity. The Brazilian’s departure also breaks the tie at 10th and allows Rena Kubota to slide up to No. 9. The atomweights have a busy final month of the year. Ayaka Hamasaki faces Kanna Asakura at the final Rizin card of the year. Seo Hee Ham, a UFC veteran, looks to continue her successful drop back to 105 pounds when she takes on Jung Eun Park under the the Road FC banner. Invicta champion Jinh Yu Frey is out to score a more decisive victory in an immediate rematch with Minna Grusander. Mina Kurobe fights Tomo Maesawa on the Deep Jewels 22 card. Finally, eighth-ranked Amber Brown wants to stop the ascent of Alesha Zappitella.