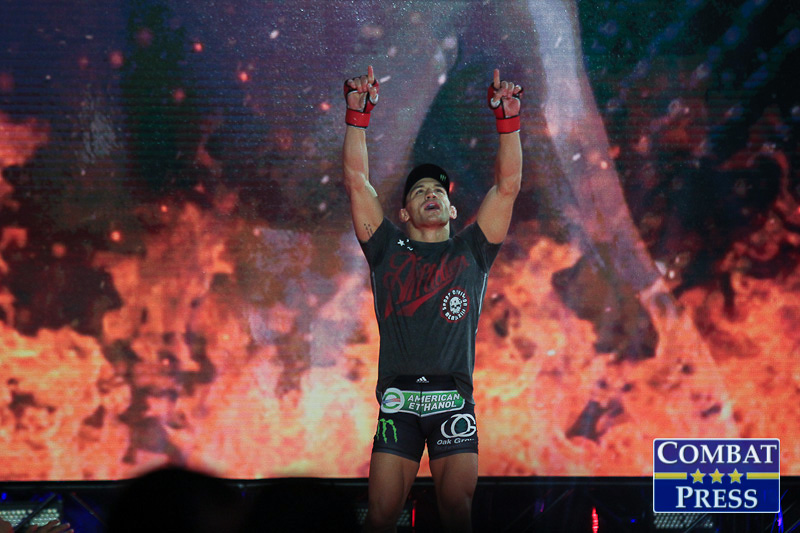 Bellator MMA continues its jam-packed month of fights with the promotion’s third card in November. Bellator 165 heads to the SAP Center in San Jose, Calif., for a five-fight main card capped with a title fight.

The title fight takes place in the lightweight division, where newly crowned champion Michael Chandler will start his second run as the king of the 155-pounders against former UFC lightweight champ Benson Henderson, who will fight for the third time under the Bellator banner. Henderson is coming off a weird victory over Patricio Freire at Bellator 160 after an injury forced Freire out of the fight in the second round. Chandler lost his title to Eddie Alvarez in 2013 and failed to reclaim the interim title twice against former champion Will Brooks. However, Chandler has won his last three fights and claimed gold once again when he finished Patricky Freire in a clash for the vacant title.

The co-headliner also features a big name from the Bellator roster. Michael “Venom” Page will look for another flashy knockout to add to a growing highlight reel. Page goes up against Fernando Gonzalez, who has been a pleasant revelation for Bellator. Gonzalez has already added some big names to his resume, but he will look to get a win over the biggest of them all against Page, who faces his first true test in the welterweight division.

The main card will also feature a battle between Linton Vassell and Francis Carmont in the light heavyweight division as a possible next step to see who can challenge newly crowned champion Phil Davis. Meanwhile, prospect Adam Piccolotti will take a jump in competition when he meets Brandon Girtz at lightweight. Bellator 165 also heads to the women’s side for Keri Melendez’s pro MMA debut against Sheila Padilla.

The Bellator 165 preliminary card action will air on Bellator.com. The main card will air live on Spike TV beginning at 9 p.m. ET.

Benson Henderson has had a disappointing run so far under the Bellator banner. Can he finally turn things around in a lightweight championship bid against Michael Chandler?

If there was ever a fight where Henderson needed to turn things around, this is it. Unfortunately, it’s a very steep task for the former UFC champion.

Chandler is a tough fighter who has looked like a man on a mission in his trip back to the lightweight championship. Chandler has great wrestling and grappling, coupled with a lot of strength on the feet. His last two fights have ended by way of knockout. If he lands a clean shot against Henderson, it could be three straight.

The problem with Chandler lies in his striking. He isn’t a very defensive striker and therefore tends to leave himself open. This will be Henderson’s big chance, assuming he can take advantage of the holes in Chandler’s stand-up game.

Henderson is like Chandler in that he has good wrestling and grappling skills to complement his striking. However, he hasn’t looked anything like his old UFC self in his two fights thus far for Bellator. Henderson was thoroughly dominated by Andrey Koreshkov in his welterweight title bid. He was way too small to compete with the welterweight champion. This led to a powerful grinding effort from Koreshkov that made for a rather effortless beating against Henderson. Even Henderson’s fight with Freire, there wasn’t anything too spectacular displayed by the UFC veteran in a victorious effort. If Freire hadn’t been injured, the fight looked like it would have gone in the Brazilian’s favor. What all of this adds up to is a scary pick here to choose Henderson as the predicted winner. He hasn’t been able to put anything together since his arrival in Bellator.

The safe bet, then, is Chandler. Henderson was a world beater at 155 pounds in the UFC, but time is starting to pass him by in Bellator. Chandler will defend the title, but not with a finish. Henderson is an extremely tough fighter who will force this contest to a decision, where Chandler will claim victory to make his first successful title defense. The win will also allow Chandler to register a big name on his resume to solidify him as one of the better lightweights on the planet.

Michael Page is set to meet Fernando Gonzalez. If that sounds familiar, it should. The pair was to meet in March at Bellator 151 and then in July at Bellator 158. Is the third time the charm?

If the fight fails to come to fruition now, with very little time left before not only weigh-ins but the bout itself, then Bellator should just scrap this fight and give up entirely. If it falls through this time, then it just isn’t meant to be.

This is a killer fight, though. Page finally takes a step up in competition to face Gonzalez, who doesn’t have a record that really catches the eye, despite his status as one of the better welterweights on the Bellator roster. He was a surprise revelation for the promotion when he beat Karl Amoussou in his debut. Gonzalez then parlayed that victory into a five-fight winning streak that included wins over Marius Zaromskis, Karo Parisyan and Gilbert Smith. Gonzalez has looked great in each victory. He has a complete skill set anchored by his strong striking game that turns fights into all-out wars.

Stylistically, Gonzalez is a great match-up for Page. Gonzalez will trade if his opponent does, which Page will almost assuredly do. Gonzalez has displayed solid grappling in his past fights. He has the ability to get the fight to the ground, and while Page has shown some improved takedown defense, it remains the biggest question mark for him.

Page still has to remain the favorite to win this fight, but it won’t be the flashy knockout performance we have come to expect in a Page fight. Instead, the rising star will get the job done on the scorecards. It’ll be a hard-fought decision victory that will indicate that it’s time for Page to make another jump up in competition.

Keri Melendez is joining the professional MMA ranks at this event. Does she have what it takes to become a flyweight star in the sport?

To rule out anybody in their first fight is laughable. There isn’t any tape to watch of Melendez in MMA action. We do have kickboxing footage, but there isn’t really any basis to say whether or not Melendez will be a star.

She has the backing of her husband, Gilbert, who himself is a very successful fighter. This could potentially make her one of the bright spots in her division, but who knows?

What we do know is that Bellator will build her to the best of its ability. The company hasn’t given her anybody decent in her kickboxing bouts, so Melendez thoroughly dismantled her opponents there. The same will probably happen in her MMA career. Bellator will try to build her as a world beater and a champion. Eventually, she will get tough opponents. Then we will truly see whether or not she has what it takes.

Melendez will win this fight based on her striking. She’ll most likely dominate against Sheila Padilla much like she did on the kickboxing side of her career. We’ll see after Bellator 165 whether or not Melendez at least has a glimmer of what it takes, but it will ultimately take more than just one fight to judge her future potential.

His debut keeps getting put off further and further, but Kevin Ferguson, Jr., definitely takes the pick here for his fight against Aaron Hamilton. Ferguson has looked really good in the small sampling of videos I’ve seen. His hands look powerful and quick, which makes him an interesting prospect to watch as time progresses. It’s thoroughly intriguing to see how Ferguson’s debut goes.