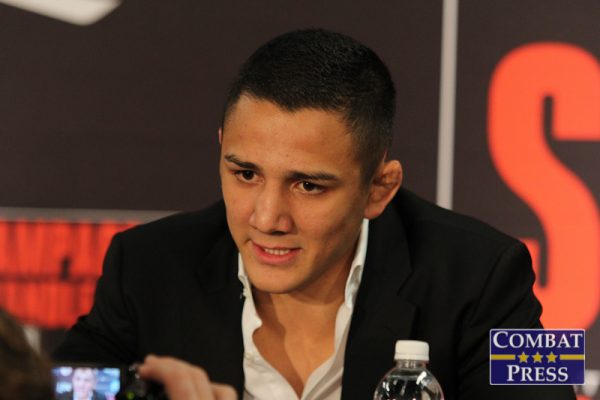 Very few fighters in the past, whether in the UFC or Bellator, have had the amount of hype Aaron Pico has enjoyed coming into MMA. As Bellator’s blue-chip prospect, Pico was given loads of expectations and a high bar of standard to meet.

It did not help when Pico lost his professional debut against Zach Freeman in just 24 seconds at Bellator NYC in June 2017. The defeat really put a lot of doubt on the 22-year-old American. It must not have been easy for Pico to remain mentally strong and continue to believe in himself, either. Fighters are special athletes, but they’re humans too. Yet, Pico’s confidence never broke or even bent. No, not even close. He took the loss on the chin and progressed multiple steps forward as a result. He won his next three fights via first-round knockout, never needing more than four minutes to dispatch an opponent.

Losing in devastating fashion in a professional debut is no easy thing to take for anyone. It would have made most fighters a little gun-shy. However, since taking the loss, Pico has not hesitated to go right after his opponents. There’s something has to be said about this. He destroyed Justin Linn in 3:45 of the first round. He landed a punch to the body of Shane Kruchten to finish their fight in just 37 seconds. It took him only 70 seconds to stop Lee Morrison. Even facing world-class competition in the form of Leandro Higo, Pico was never the one backing up in the fight. He was always pushing Higo’s back against the fence, and Pico managed to eventually land massive shots that put Higo down at just 3:19 of the very first frame for another first-round stoppage.

It’s a true pleasure to watch someone with this type of confidence in himself and vision about his future. Very few people in this world are able to think and carry themselves like Pico.

“I was saying this was the biggest test of his career, that’s what I was saying to my team. He’s never fought a guy like me, he’s never fought a wrestler like me, a guy that can hit as hard as me,” said Pico after the fight on Saturday night. In what was easily the biggest fight of his career, against a guy who just fought for the world title, this was Pico’s mindset. Who else has this type of confidence at such a young age?

“Everybody says they’re gonna do this, they’re gonna try to get me to the ground, but once you feel my power, it’s on a whole different level. And if I wanted to take him down, I could take him down at any time,” Pico said. “My confidence just goes back to my training. I have great training partners [and] great coaches.”

This is certainly one source of confidence for Pico, but another has to be the fact that he has had so much success in whatever he has attempted in the past, whether it was wrestling or boxing. A lot of people forget that Pico was a national Junior Golden Gloves champion.

In his own post-fight comments, MMA legend Quinton “Rampage” Jackson said, “Bellator is taking over.” Whether this is true or not, only time will tell. However, if Bellator was to take over the sport of MMA, then Pico is certainly in the front line of the new generation of fighters.