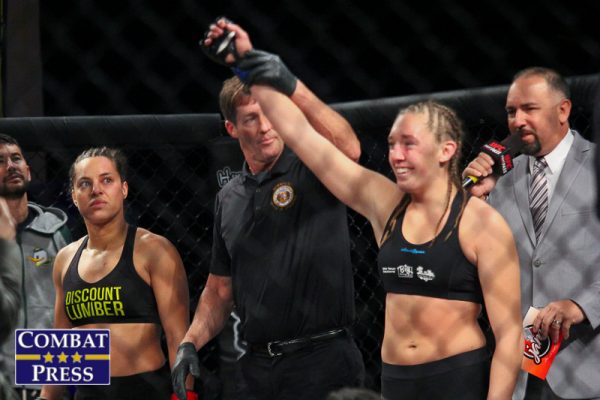 For the 28th installment of the core edition of The Ultimate Fighter, the UFC is going big — literally. The organization has opted to focus on the men’s heavyweight and the women’s featherweight divisions in the hopes of providing an influx of new talent to the heaviest division for each gender.

Two former TUF winners will coach the Heavy Hitters this season. The Ultimate Fighter: The Smashes champ and reigning UFC middleweight titleholder Robert Whittaker squares off against TUF 17 winner Kelvin Gastelum, and the coaches will meet following the season to vie for Whittaker’s strap.

In the meantime, fans can enjoy all of the reality-show antics, drama and fight action on Fox Sports 1. The season debut airs on Aug. 29, and it all leads up to the live finale event on Nov. 30.

Let’s look at the cast for this season of The Ultimate Fighter. We’ll start with the featherweight ladies. The number preceding the fighter’s name represents Combat Press’s seeding of the athletes heading into the season.

The one constant with the women’s featherweight bracket of this TUF tournament is that most of these ladies are actually bantamweights. The first of these women is Germany’s Lehner, a former Invicta title challenger who appears to be the frontrunner so far.

At 5-foot-5, Lehner is already a tad undersized at bantamweight, let alone featherweight. It’s doubtful that she will have to cut much weight for this tournament. This actually will work out to her advantage, given that the show’s format requires these athletes to compete in multiple bouts in a short amount of time.

The knock on Lehner is her finishing rate. To date, she has just one finish, which came when Lehner knocked out Alexa Conners in her Invicta debut. Lehner is a striker, but there are some other solid strikers in the bracket. Her quickness and technical prowess will definitely be important.

Lehner has more pro experience than most of the field, save for a couple of fighters. Expect her to make it out of the quarterfinals with relative ease before getting more of a challenge in the semis and likely the finals as well.

Formerly a featherweight before making the tough cut to bantamweight, Kianzad may be in the catbird seat to make a deep run in this tournament. She will have the size and strength to overwhelm opponents, especially the smaller women in this bracket.

The Iranian-born Swede has a strong boxing background from before she took up MMA, which explains why she’s dangerous on the feet. She has good footwork and technique with her hands. She has also added some solid wrestling to her skill set, which has made her more of an all-around threat.

Like Lehner, Kianzad is not the most prolific finisher. The 5-foot-7 striker has just three stoppages to her name, all of which came by way of knockout. She’s also faltered when stepping up in competition, though those losses came to fighters who are probably superior to most of the women in this eight-woman field.

Kianzad’s well-roundedness and size will make her a fighter to watch in the competition. There might not be enough talent here to compete with a woman with Kianzad’s skills. She could fight her way to the finals and meet Lehner in an all-European affair.

It was reported before TUF 28 was announced that Letson had been signed to take a featherweight fight in the UFC. When the bout did not materialize, she was placed on the TUF 28 roster.

Letson has fought at bantamweight, but her most recent bouts have taken place at 145 pounds. She seems to have found a home in the featherweight class, but she may be forced to take fights at bantamweight if she makes it into the UFC.

Letson has a taekwondo background, which is evident in her fights. She throws a lot of kicks and does so with power. This includes a head-kick knockout of UFC veteran Elizabeth Phillips, which really skyrocketed Letson into the spotlight.

Letson is a finisher, which will be important in this competition. Any fighter who can end fights before the judges come into play will be at an advantage. The less time she spends in the cage, the fresher she’ll be for her next bout, too. Letson could definitely smash her way to the finals in violent fashion.

Pacheco is tied with Kianzad for the most experience in the competition. Furthermore, she’s the only fighter in either bracket to have already fought in the UFC.

Pacheco, 23, is the youngest woman in the bracket. That’s fascinating, considering her wealth of experience, especially at the highest level. She also has a strong Brazilian Jiu-Jitsu background, which will be key in a competition littered with strikers.

Pacheco is a finisher. Sure, the competition in Brazil has not been the strongest, but she nevertheless has scored the finish every one of her wins. Her only two losses came in the UFC, where she fell to former featherweight champ Germaine de Randamie and strawweight contender Jessica Andrade.

The Brazilian likely has the strongest ground game in the competition. The young fighter continues to be a top prospect in women’s MMA. She could be a dark horse in this competition. She’s only a takedown and submission away from a win whenever she steps into the cage.

Allen is the oldest fighter in the competition. She just so happens to also be one of the most in-shape fighters. Her delve into Crossfit training and owning her own gym has made her into a fitness freak. This is an x-factor that could carry well into a competition where fighters will be forced to rely heavily on stamina.

The 36-year-old Allen is one of the tallest fighters in the competition. She has experience at a high level, including one outing in the World Series of Fighting. Allen’s only two losses came to UFC veterans Ashlee Evans-Smith and Jessamyn Duke, which means she needs to show more consistency when stepping up in competition.

Allen, like many of her fellow TUF combatants, most often uses striking in her fights. Her two losses came on the ground, where she was pounded out by Evans-Smith and submitted by Duke. Allen will not want to end up on the bottom, especially against fighters like Kianzad, Pacheco or Macy Chiasson.

Allen is the most athletic fighter on the show. She can go three rounds if needed. That is important, since she gives up skill to a lot of the fighters in this tournament. She’ll need to improve her skills a little bit, which could prove difficult in this late stage in her career.

A natural featherweight and the biggest fighter on the show, Louisiana’s Chiasson is the ultimate dark horse in this competition. The undefeated two-fight upstart will fly under the radar, but she could turn in a surprise performance in the tournament.

The 27-year-old fighter may lack experience, but she has shown to be a top prospect at 145 pounds. Chiasson has one fight under her belt in the Invicta organization, where she scored a convincing decision over Allison Schmidt. It’s been proven throughout her amateur and pro careers that she is powerful on the feet and possesses a strong ground game.

Chiasson is a fighter to watch down the line. She’s young and inexperienced, but she has a ton of potential. It will benefit her greatly to receive coaching from guys like Gastelum and Whittaker. Watch out for Chiasson.

Sweden’s Malecki represents the nation’s Allstars Training Center, one of the finest gyms the country has to offer. However, the rookie competitor is the least experienced mixed martial artist on the show. Malecki has a lot to learn and plenty to prove.

The UFC has Malecki listed at 2-0, but the organization might be looking at the amateur resume of “Bad News Barbie” for these fights. Malecki does have a strong Muay Thai background and stands out as one of the most accomplished strikers on the show. Her ground game is a bit of a question mark, and it’s possible she will get run over by her more experienced castmates.

Given her lack of MMA experience, Malecki should benefit from the high-level coaches on the show who will certainly help turbo-charge her training. Right now may not be Malecki’s time, but she could turn into a future threat in the division.

Lithuania’s Stoliarenko holds this list’s honor as the longshot in TUF 28.

Stoliarenko has experience in a variety of combat sports, including grappling and striking arts. She is a grappler by trade, which shows in her MMA fights. Most of her wins have come by way of submission.

Her only two losses as a pro fighter came to top fighters. Stoliarenko stumbled against Agnieszka Niedźwiedź and Lucie Pudilová. Meanwhile, her wins have come against very questionable foes. Yet, with her grappling credentials, Stoliarenko could be better than advertised.