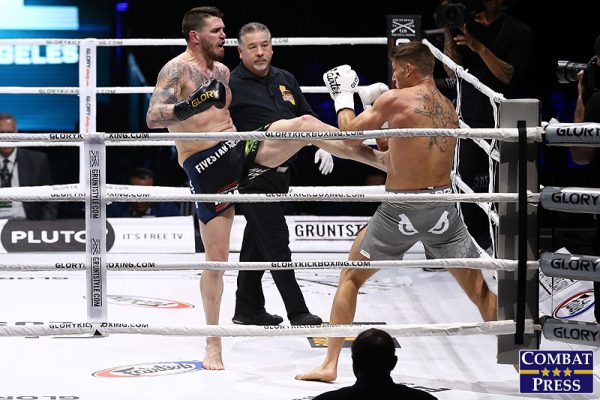 GLORY 56’s Chris Camozzi: ‘I’m Just Having Fun With It’

In the United States, it’s easy to assume that MMA is taking over as the biggest combat sport. There is a certain fame and luster that resides with the UFC, specifically, that seems to transcend all other combat sports in the mainstream. Boxing, which used to be the most watched combat sport in the States, has definitely started to take a backseat to MMA. However, the global view is much different.

On an international scale, while MMA has definitely gained popularity and market share, kickboxing is the king of combat sports. Both Muay Thai and the Dutch style of kickboxing have become more of a global phenomenon, and the current king of kickboxing promotions is GLORY Kickboxing.

MMA veteran and newer pro kickboxer Chris Camozzi has seen both sides of the coin. The longtime UFC fighter is currently under contract with Absolute Championship Berkut for MMA and GLORY for kickboxing.

“GLORY’s just fun all around,” the Colorado native told Combat Press. “There is not much stalling. It’s just stand and throw. That ring’s not huge. They call you on stalling pretty quickly, and they don’t like clinching, so if you like knockouts and you like brawls, this is it. It’s still catching on. People who boo in MMA when guys are clinched against the cage or on the ground, should be fans of GLORY.”

Camozzi made his GLORY debut in December at GLORY 48 in New York, where he scored a second-round TKO win over Kyle Weickhardt. In March, he was back in the GLORY ring against kickboxing veteran Mike Lemaire. Camozzi lost via decision, but it was an opportunity for him to get in there against a more seasoned kickboxer.

“It was a learning experience for me,” Camozzi admitted. “Obviously, I lost, but it takes me a little bit of time to figure this out. Even though I lost, it was a good thing, because I learned a ton from it. I know what I needed to fix. I think that Mike Lemaire had more experience than me with kickboxing, and he knew how to game the system a little better. I learned from that, and it’s only going to make me better. I’m just being optimistic about it. It might take me a second to get used to these guys, but I feel like I got it down now.”

On Friday night, GLORY 56 lands at the 1stBank Center in Broomfield, Colo. Camozzi, traditionally a middleweight, will be back in action as part of a light heavyweight superfight tournament.

“I just think my body’s done cutting weight,” Camozzi explained. “It was just getting harder and harder. Even in my last couple UFC fights, it was a real struggle getting down to 185 [pounds]. I think it was just time. I’m 31 now, and I’ve been cutting weight for 11 years. I feel better at this weight, and it’s been a lot less stress, not having to worry about jumping on the scale after every workout.

“I’m just having fun with it. I’m enjoying training, and I don’t feel all burned out like I normally do from training camps. All I’m doing is focusing on having fun with training. Obviously, I’m still eating healthy. I took my old diet that I used to do to cut weight, and I’m doubling up on the food. I’m eating more, so I’m full and happy.”

In the second scheduled fight of the four-man tournament, Camozzi faces fellow MMA crossover John King, who also made his debut at GLORY 48, where he lost to UFC veteran Thiago Silva.

“I’ve seen him fight one time,” Camozzi said of King. “He’s a big, strong guy. Obviously, I need to stay tight defensively. He definitely swings for the fences. I’m going up a weight class, so I need to be ready for stronger guys. Other than that, I don’t know a ton about him. I’ve just been focused on myself this whole training camp, and making myself better. I’m working on power, speed and all things I’m going to need moving up a weight class.”

The winner of the contest between Camozzi and King will advance to meet the winner of the other tournament semifinal, which features Myron Dennis and Danny Mitchell, later that same night. Dennis is, by far, the most experienced kickboxing vet of the four, but he is 0-3 in GLORY thus far. Mitchell has 12 kickboxing bouts under his belt, but he is making his promotional debut. King has 13 pro kickboxing fights, but he is also on the losing end of things in GLORY. Camozzi is not only coming in with the most overall fighting experience, but he is also coming in with the best GLORY record of the four, so the tournament is ripe for the taking.

While pro kickboxing is a newfound passion for Camozzi, he is still very much training as an MMA fighter. Since his release from the UFC last year, he has been actively seeking opportunities to get back in the cage. He was supposed to face the aforementioned Silva in an MMA fight for ACB in June, but after Camozzi made the trip to Australia, his opponent never showed up. With ACB now in restructuring mode, his options are open.

“They only have two cards left for the year, and, as far as I know, I’m not on either of them,” Camozzi revealed. “I guess they’re both full. They’ve given me the go-ahead that if I want to go fight somewhere else, I can, but I still keep my contract with them. Right now, I’m somewhat of a free agent. I’m able to fight, and we’re definitely looking, because I want to keep the fights rolling. I’m definitely looking to still fight MMA. I’m not done at all. I just wanted to double-up and do kickboxing and MMA.

“I just want to fight as much as possible. I want to keep it rolling. I’m not getting any younger, so I want to get in as many fights as I can. I just want to stay healthy and keep getting better. GLORY is exciting, and something crazy happens in Denver every time. I expect nothing less. This card is stacked. There are two title fights, and then the tournament that I’m in.”

Camozzi would like to thank all of his coaches and training partners at Factory X, including Marc Montoya and his own brother, Brian Camozzi. He would also like to thank his management at Ingrained Media, and his family, friends, fans and sponsors: Revivid Sport, Koios and 5 Star Coatings. Follow Chris on Twitter: @ChrisCamozzi and Instagram: @ChrisCamozzi7
Advertisement