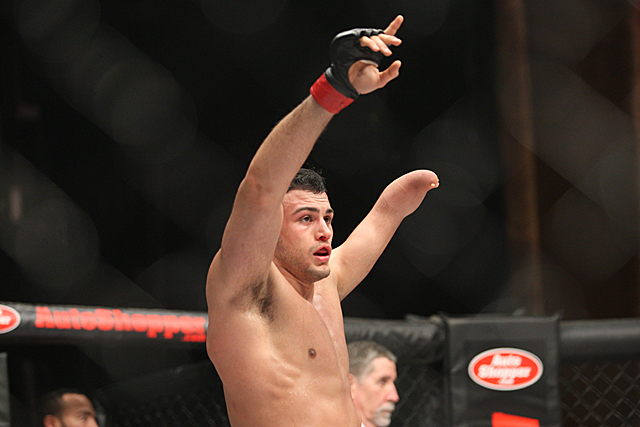 The show continued with its fifth entry last week, and now it returns for its sixth episode on July 24. The UFC Fight Pass stream gets underway at 8 p.m. ET.

Newell is the most recognizable name on the card. He has the most experience of any fighter on the card, and he has fought the most times in the big leagues. Newell really should be considered to be beyond a prospect at this point. Even with only one full arm, Newell has proven to be an exotic talent. He can score knockouts or submit opponents in unique ways. His only loss came to top UFC talent Justin Gaethje. Newell’s hand was raised in his other 14 encounters. He takes on tough Team Alpha Male fighter Alex Munoz in the main event, but let’s be clear: a win for Newell means a contract.

Neither man may be ready for the UFC quite yet, but their styles will match up well in this bout and make for a barn-burner of a fight. Although he runs with grappler Lloyd Irvin, Yusuff is a brawler on the feet and wields big-time power. He throws with bad intentions, and when he lands, he can do serious damage. The same can be said of Davis. Davis has a grappling background, but he has scored his wins via knockout. If he goes toe-to-toe with Yusuff, don’t expect this to go to the judges.

The Contender Series should be reserved for top up-and-comers and veterans on a tear. Birchler is neither of these things. How could the UFC bring on Birchler, especially given that he’s coming off a loss and is 2-3 in his last five fights? Sure, two of those losses came against upper-tier competition in UFC veteran Matt Hamill and UFC roster member Zu Anyanwu, but that doesn’t negate the fact that Birchler hasn’t been able to put consecutive wins together since 2013. There had to be better options at light heavyweight than Birchler.

The 22-year-old Australian is the true definition of a prospect in MMA. Crute is young, undefeated, skilled and has good athletic ability. Throughout his career, which began in 2016, he’s fought far more experienced opponents and veterans in Australia. In his short, two-year career, he’s finished four of his seven wins, equally by knockout and submission. If Crute can score a finish here and do so impressively, the UFC could come calling. The company needs light heavyweights.

Newell should have received a shot in the UFC without having to go through the Contender Series. Furthermore, he’s a feel-good story that the UFC promotional machine can build upon. He’s got the skills to be in the big leagues, too.

As always, the heavyweight division is in need of more bodies, and a strong showing from Hughes will get him there.

Crute is a young, talented prospect in a weight class that needs stars for the future. The UFC can build the light heavyweight fighter up slowly.