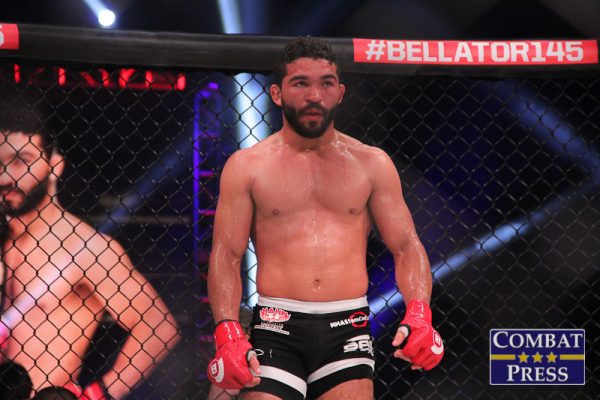 On the back of Bellator 202, Bellator MMA delivers a second card for the weekend when Bellator 203 flies out to Rome, Italy, and the Il Centrale Live Roma.

The main event of the evening is a featherweight title rematch between champion Patricio “Pitbull” Freire and challenger Daniel Weichel. Weichel was a lot for Pitbull to handle in their first fight. The German posted a strong first round that had the champion on the ropes, but Freire dug deep in the second frame and landed the knockout blow. Since then, Freire has gone 2-2, while Weichel has won four straight fights. The two men were previously scheduled to meet months ago, but an injury forced Freire out of the bout.

The co-headliner takes place in the light heavyweight division, where UFC veteran Alessio Sakara returns to the cage for his 31st fight. The Italian goes up against Jamie Sloane. Sakara has gone 2-1 since joining Bellator, but he is coming off a failed bid for the middleweight title against Rafael Carvalho. Sloane is set to make his Bellator debut, and he is just 2-3 in his last five fights.

Also on the main card, former Bellator welterweight champion Andrey Koreshkov takes on Vaso Bakočević. Koreshkov will look to add another win as he makes his climb back toward welterweight gold.

The main card will air on tape delay in the United States on the Paramount Network beginning at 8 p.m. ET.

The last time Patricio “Pitbull” Freire fought Daniel Weichel, the Brazilian defended his featherweight title with a second-round knockout finish. Will Weichel fare any better in this rematch?

Most definitely. Let’s not forget that Weichel won the first round against Freire. The 33-year-old almost beat Freire at the end of the first round with a big right hand that ended up leaving a welt under Freire’s eye. Sure, the Brazilian was able to mount a comeback and beat him in the second round via knockout, but Weichel was more than in the fight. He just ended up getting clipped. In this sport, one mistake is all it takes to ruin a good head of steam.

Based off their first contest, Weichel seems more than capable of threatening the champion. He already succeeded in executing the blueprint, but it just needs some fine-tuning. In this rematch, the German needs to take a more methodical approach. Weichel needs to keep his distance if he wants to win. He should even deploy his ground game. Freire was able to find some holes in Weichel’s stand-up game and close the distance to land some nasty shots. Weichel cannot let him settle into that groove once more.

Weichel has also trended upward since the pair’s first fight. He’s gone on to post a four-fight winning streak. He isn’t submitting fighters left and right anymore, but it’s still four victories inside the Bellator cage against a group of guys that includes Emmanuel Sanchez and Georgi Karakhanyan. Meanwhile, Freire has struggled, going 2-2 since he last met Weichel at Bellator 138. The Brazilian has suffered losses to Daniel Straus and Benson Henderson. This trends well for Weichel. If the challenger executes as well as he did in the opening stanza of the first fight, then he could come out victorious.

Bad choice, for sure. The logistics of it is one thing, but Bellator already struggles with creating some deep, impactful cards. This double-event weekend stretches the roster thin for a card in European territory. The organization made good choices for its European offering, with fighters like Daniel Weichel, Alessio Sakara and Andrey Koreshkov, but these guys could have been saved to create a deeper card elsewhere on the event calendar. We already get a lot of watered-down cards from the promotion, but then we see something like the last card, Bellator 201, where the lineup was deep in terms of talent. The consistency is lacking.

Does this title fight not seem like a good idea for a different card? Is it really that necessary to run a European card the same week as another show? If the bigger fights of this card were to be added to the previous night’s Bellator 202 lineup, it would have actually been a relatively good card from the promotion. Wouldn’t the company rather produce one strong card with a couple of title fights rather than two mediocre cards that stretch out the roster?

This doesn’t even begin to take into account that the Bellator 203 event airs on tape delay in the United States. This is a terrible way to go about things in the 21st century. The results of the card will be available before the airing, and it’s a difficult endeavor to watch a sporting event when you already know the outcome.

It doesn’t make sense for Bellator to have two cards on the same weekend. It’s going to be a case of Bellator overload for some people. We may get more MMA and another card to feast on, but quality is worth far more than quantity.

Koreshkov isn’t a flashy fighter, but this fight comes before the welterweight tournament where Koreshkov is rumored to be a participant. That’s big. Koreshkov could potentially overlook his opponent in this fight, which would not only be a huge upset, but also a huge blow to the bracket if a former champ enters the field following a giant upset loss.