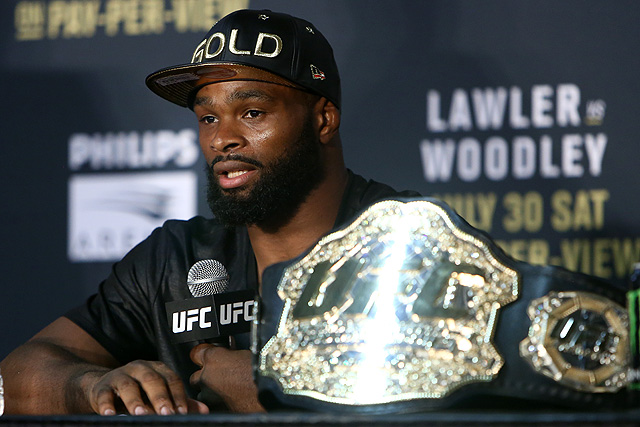 There have been some notable turf wars in recent pop-culture history. During the height of the boy-band phenomenon around the turn of the century, fans mainly swore allegiance to the Backstreet Boys or NSYNC. For those of us unlucky enough to remember the movies based on the young adult novel series Twilight, fans were either on “Team Edward” or “Team Jacob.”

So, following the result of the co-main event at UFC 225 this weekend, there is a high probability that fans may have to choose sides — they can either be on “Team Tyron” or “Team Colby.” After Colby Covington defeated Rafael dos Anjos to win the UFC interim welterweight title, he is now on a collision course with the current welterweight champion, Tyron Woodley.

This fight will obviously be heavily influenced by Covington’s polarizing personality and comments. Who can forget Covington insulting the entire country of Brazil following his victory over Demian Maia (in Brazil, no less) last year?:

Covington has fully embraced the “heel” persona made popular by other fighters such as Tito Ortiz, Chael Sonnen and Conor McGregor. He also appears to be influenced by the current discourse in American society, which can largely be attributed to the election of President Donald Trump. Covington constantly claims to want to make the UFC’s welterweight division “great again” and uses the term “snowflakes” in interviews to describe his detractors.

Covington even said after his victory over dos Anjos that he was taking his belt to the White House to meet Trump, and UFC President Dana White said he could help arrange a meeting. Covington also received a congratulatory message on social media from Trump’s son, Donald Trump Jr.

The idea of a UFC fighter visiting the White House — if White is telling the truth — was previously unheard of. However, imagine what could happen for a future fight between Woodley and Covington if Trump tweets about it. It could create the type of buzz and anticipation that White has dreamed of for his promotion and that no one else, not even McGregor, could pull off.

If this actually happens, it also has the potential to blow up Woodley vs. Covington in ways I’m not sure we’re ready to handle.

In light of all this, it would be easy to paint Woodley as the hero going up against the villain Covington, right? Well, not so fast. Woodley also frequently receives criticism from fans for his alleged “boring” fighting style, his alleged reluctance to fight certain opponents and for not having fought in close to a year. While Woodley has taken time off to address injuries, he is ready to fight again and did defend his belt four times in one year after winning it from Robbie Lawler in 2016. But that doesn’t seem to sway critical fans.

Tyron Woodley is hands down the most fucking boring fighter in the UFC.

Tyron woodley’s ducking wonderboy. He chooses to fight Nick Diaz? That’s a bad match up for you buddy. Both of them are

Hey @UFC, Tyron Woodley appears to be mass-blocking people on Twitter. That’s bad for sales, just a heads up in case he cries racism later.

The combination of Covington’s personality, the possible presence of Trump, and Woodley being an African-American champion facing a white opponent who has fully embraced everything many people believe Trump stands for, could reveal some stark contrasts among UFC fans once a fight between Woodley and Covington is officially booked.

It is also possible that there are fans that have been critical of Woodley but also cannot stomach Covington’s personality, which means they might find themselves rooting for Woodley to win.

So, ultimately, there is a chance that UFC fans could have to answer the question: Are you on Team Tyron or Team Colby?