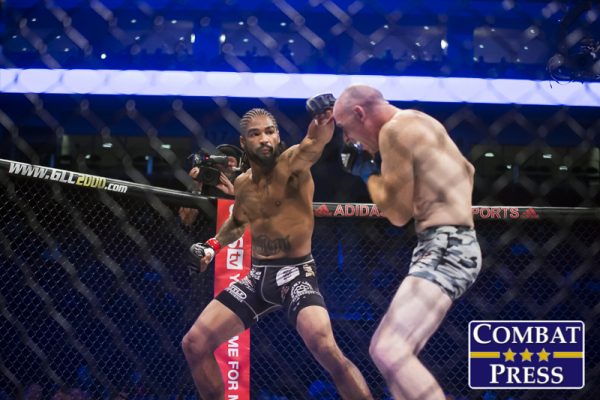 Plenty of people are great storytellers. They use strategic embellishment, a colorful cast of characters and a finale that can’t be beat. However, some of the best stories are told with actions, not words.

There are plenty of crazy stories about how some people got into mixed martial arts, but sometimes there are some pretty fantastic stories that are told in the cage. Kassius “Killa” Kayne Holdorf has an all-too-familiar story of his foray into MMA.

“I started MMA back in 2010,” Kayne – as he goes by his middle name – told Combat Press. “I got into it after college. My college roommate asked me if I wanted to try it, so I did. I just stuck to my wrestling moves, because I was a wrestler in high school and in college. So, I just did a wrestling workout camp, and I didn’t train in a gym or anything. I had my wrestling background and a little bit of boxing, but that was it. So, I drove up to Brookings, South Dakota, and I won in the first round by rear-naked choke.”

Kayne grew up in Winside, Neb., a small farming town in the northeastern corner of the state, not far from South Dakota. After wrestling through college, he headed to Minnesota West, a small college in Worthington, Minn., to play football and soccer. It turned out that college wasn’t really for him. That’s when his roommate Dallas suggested he try fighting.

“On my way home from my fight, [Disorderly Conduct owner] Andrew Lee called me and said he saw my fight, and he wanted me to stop by his office when I got to Omaha,” explained Kayne. “So, I did that, and he had my fight up on his computer when I walked in. He said, ‘Man, I think you could take this pretty far if you wanted to do it.’ So, he asked me if I wanted to do a St. Patty’s Day show, and I said let’s do it. That was my second fight, and the guy I fought had seven fights. I was a little nervous at first, because the guy was a striker.”

This is where Kayne’s story starts to gain some unique interest. His second amateur fight went in his favor, but he was still rough around the edges. He had little striking training at all, and he was winning MMA fights without even technically training in MMA.

“I went into Premier Combat Center,” Kayne explained. “Kurt Podany was running the team training. And I had never kicked or punched or anything like that before, and Kurt was looking at me like, ‘Where did you come from?’ I trained there for three years, but I had some issues with the gym, so I went to Mick Doyle’s [Kickboxing & Fitness].

“I made my pro debut when I was still at Premier Combat Center. I had one or two fights, and I just didn’t feel that I was getting the training I needed. At the time, Anthony Smith was training at Mick Doyle’s, so that was one of the reasons I went over there. Me and him are pretty good friends, and he was talking to me about coming over to Mick’s. He said that Mick is a good coach, and I went over there, and the rest is just history now. I’ve been a pro for four years. I’m 12-4, and I’m just trying to get to the big show, man.”

Podany is the Muay Thai coach at Premier Combat Center, and Doyle is a former Irish and world kickboxing champion. Why does all of this matter? Kayne, the wrestler who entered MMA with no striking experience, picked up eight of his amateur wins by knockout and one by striking submission. This striking success carried right into his pro career.

As a pro, Kayne has done a great job of putting together some impressive victories. Almost all of his fights have taken place on big regional stages like Victory Fighting Championship, the Resurrection Fighting Alliance and the Legacy Fighting Alliance. He even held the Victory FC welterweight title for a time. All of his pro wins have come by finish, and he has only been stopped once. All of his pro submission wins are due to strikes, so his performances reek of violence. This is not your typical wrestler. With a record like that, it’s a wonder that he is not in the big show yet, and especially when you see 0-1 guys on the main card of UFC 225 this weekend.

“There’s a lot of politics to MMA, and I don’t get it,” Kayne said. “I really don’t understand it at all. I’m going to stand on my own, and I’m not going to worry about what other people do or when they get to the show. I’m just grinding and taking as many fights as I can. I want to fight tough guys, and when I get to the UFC, I want to know that I earned it.”

Kayne’s next shot at getting on the radar comes on Friday night at LFA 42 in Branson, Mo. He faces a very game Derrick Krantz, a veteran of the LFA and Legacy Fighting Championships. Krantz has had his share of high-profile regional showdowns. After losing the LFA welterweight title to James Nakashima in September, Krantz got back in the win column in March.

“He’s a brawler, man,” Kayne said. “I watched a couple of his fights, and he’s a tough guy. He’s a powerhouse and likes to wrestle, so I’m going to bring the fight to him. I’m going to watch for that takedown and try to end the fight however I can.”

The LFA 42 headliner has the proverbial fireworks written all over it. Both of these guys are tough, grinding vets, and both of them love to stop fights. A great performance would definitely get Kayne one step closer to the Octagon. With his history of cage violence, fans should expect nothing less.

“I’m an exciting fighter,” said Kayne. “I get the crowd into the fight, and I don’t have a boring style. I don’t do lay-and-pray, and I’m not a jiu-jitsu guy. I’m looking to finish whenever I can. I’m coming, man. I don’t sit around and wait for people to impose their will on me.”

Kayne has been quietly telling his story in a very exciting way. He is fairly soft-spoken and does not try to make a spectacle of himself outside of the cage. However, come Friday night, when the cage door closes, fans can expect to see another chapter told in violence.