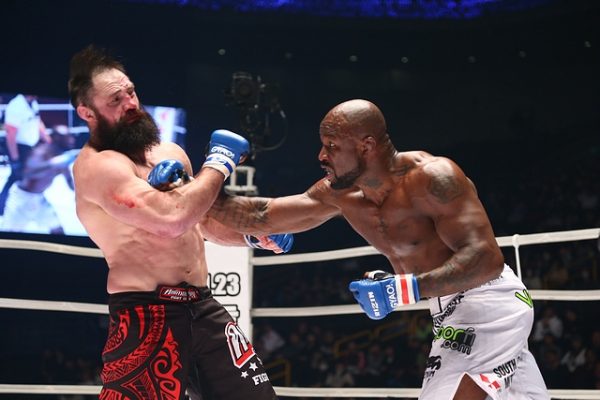 The biggest hit in movies right now? The release of Marvel’s Avengers: Infinity War, which already has surpassed $1 billion in earnings since it’s April 27 release. It’s almost like everyone, from hardcore comic fans to the casual viewer, has seen the movie. It’s been on everybody’s mind still, too. Ten years after the Marvel Cinematic Universe started, it continues to captivate moviegoers. It’s been more than just a night out. So much more. It’s allowed the inner geek to come out. We get to see the heroes we’ve read in comics come out on the big screen.

“The movie was great, probably the best movie I’ve ever seen,” Muhammed “King Mo” Lawal told Combat Press. “I thought Black Panther was, but this [Avengers] movie blew me away. Black Panther was a great movie, but the way Wakanda came out this movie. Black Panther, Guardians of the Galaxy, Thanos, Corvus Glaive, Proxima Midnight, Cull Obsidian blew me away. Ebony Maw — boy, he was crazy.”

Don’t be surprised by the take, King Mo is one of the biggest comic book fa—

OK, one of the biggest Marvel comic-book fans alive. It all began with a fateful visit with one of its most known characters.

“I remember the first Marvel comics I saw was Doctor Doom,” said Lawal. “I’ll never forget it. I was like, ‘Who is this dude?’ Just Doctor Doom, something about him. Then I got older. I’d go to the gas station and I’d see comics. I saw Spider-Man. I’d see, like, the Silver Surfer and then I’d start looking at them. I’d look at the back and see the art cover. Then I remember seeing these Marvel comic cards, and I started stealing them. I would steal them, read them and then sell them to people. It just got me hooked.”

Victor Von Doom, also known as Doctor Doom, was created by Stan Lee and Jack Kirby. He debuted in 1962 and has been the arch-nemesis of the Fantastic Four and to Earth’s Mightiest Heroes, the Avengers, throughout his comic book arc that continues to this day.

“Dr. Doom is one of the most powerful and evil,” said Lawal. “While, actually, Dr. Doom is an anti-hero. He’s a very complex character, has a complex story — into technology and the mystic arts. His momma’s soul was kept in hell. He had to go save her. Just stories like that.”

King Mo is like a walking Marvel encyclopedia. So, of the thousands of characters he can talk about, which one is his favorite?

“There’s a few,” he admitted. “It’s between Thanos, Blue Marvel, Franklin Richards or Thor, and Gorr the God Butcher and Mangog. I have quite a few [laughs].”

Most people know Thanos by now. He’s the villain in the Infinity War blockbuster. The same can be said of Thor, who has been featured in more than a few films in the MCU. But what about Blue Marvel? Well, he was a U.S. Marine who discovered his powers after a failed experiment that attempted to harness antimatter. Franklin Richards? He’s the son of Reed and Susan Richards from the Fantastic Four. Gorr the God Butcher? He’s an antagonist of Thor, as is Mangog. Whew.

Is there any character Mo relates to?

“Not really one, but all of them,” Lawal said. “The thing about Marvel comics is, all the heroes and villains have flaws. They’re either narcissistic or have temper problems, or they’re overconfident or never serious. I can relate to them all, because in a sense we all have our flaws, and those flaws can hold us back from reaching our full potential.”

What about King Mo as a comic-book hero?

“I never thought about that,” he admitted. “But I’ll be real with you: That wouldn’t interest me, because I’m not into myself. But what I’d really love to do is be a distributor to a comic or actually take over. CM Punk [Phil Brooks] took over a storyline, and I’d like to do something like that. I’d like to contribute to a Thanos storyline and maybe write a comic, do a backstory on a character or add to it. That’d be cool.”

If you’re flawed, like one of the aforementioned characters Mo mentions, and judge Lawal just based off promotional videos for Bellator, you won’t get the full picture. He’s actually like the characters you find on comic-book pages. He’s multi-layered, with tons of traits and hobbies that may surprise you the more you learn about him.

“I like competitive eating,” Lawal revealed. “I watch that shit, and it’s funny to me. I’m big into boxing. Big into Marvel comics. I’m confident in what I know with boxing and comics. I’m more confident in those than I am with anything else.”

With Bellator 199 approaching, King Mo has the chance to add to his legacy in mixed martial arts. He’s set to meet current Bellator light heavyweight champion Ryan Bader in a quarterfinal bout in the Bellator Heavyweight Grand Prix. And what of his legacy up this point? Mo is cool with it, mainly because he’s not worried about what many people think. He isn’t here to dwell on the negativity. He’s like Spider-Man swinging down 34th street in New York. He’s just going with the flow.

“People think I’m cocky [and] arrogant, but it is what it is,” said Lawal. “They don’t know me. Really, man, life goes on. Why make shit about yourself, because when you’re done, people may forget about you. Keep going forward and enjoy your life. There’s been great fighters, great artists, great everything, but the moment they’re done doing what they do, people forget about them. There’s been great fighters out there that people forget about, but I don’t. There may be people who, when I talk about them, they’re like, ‘Who’s that?’ It happens. It’s part of life.

“When your time is done, it’s time for the next person to come up. I’m cool with that. I don’t care if people remember me. I got other things I can do. I’m cool with not being remembered. I just hope the next wave of athletes takes advantage of what the past has done.”