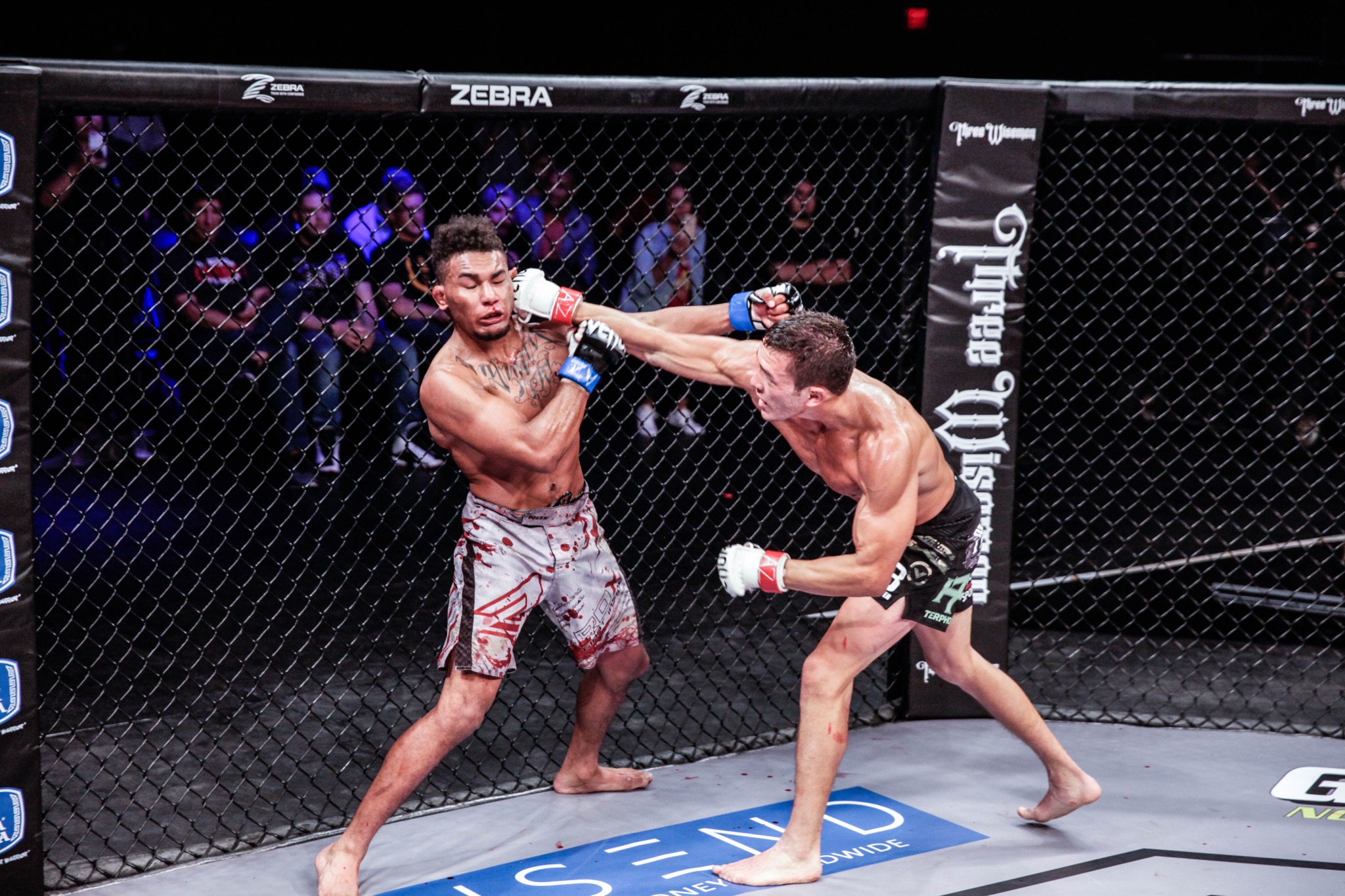 LFA 59’s Hunter Azure: The Thrill of the Hunt

The thrill of the kill. Even the most mild-mannered person can have a hunter mentality deep inside his gene pool. The human race is built to hunt for food. Originally, it was a survival mechanism, and while some people enjoy the sport aspect of hunting, there is something to be said about being one with nature, out in the wild, finding they prey, putting it down and, more importantly, using it as sustenance to live. There is nothing more thrilling than scoring a high-quality, healthy dinner — especially on an empty stomach.

Hunter Azure grew up on the Fort Peck Sioux and Assiniboine Reservation in Poplar, Mont. Poplar is in the northeast corner of the state, close to Canada, and has a population estimated to be just under 900 people. The outdoors was a way of life for Azure.

“I grew up mainly hunting whitetail deer,” Azure told Combat Press. “The last few years, I got tags for bison. We eat pretty good and keep our freezer full. We ate everything we killed or caught on the fishing pole. I ate a lot of meat growing up. I got a lot of buddies who are farmers and ranchers, so we got a lot of good produce and fresh meat all the time.”

There is a stark contrast in quality and flavor between what you’ll find in a supermarket and what has been raised or hunted. Part of the difference is also knowing where your food came from. Of course, there’s also the thrill of the hunt.

In addition to being an outdoorsman, Azure also grew up wrestling. After becoming a four-time state champion at Poplar High School, he went on to wrestle at Montana State University-Northern, about three and a half hours west of where he grew up. It was there he earned a degree in Industrial Technology.

“I’ve always been kind of hands-on and outdoors stuff — more to the construction side of things,” Azure said. “I didn’t want to be in an office job. I thought about coaching and teaching right away. Then, it took me going into a classroom once to say that wasn’t my thing.

“It’s like something I’m drawn to. I like building things. I like being outdoors. I don’t like being in the same atmosphere every day. In construction, you are always at a new spot or new job. I just like new things every day.”

College went well for Azure, but he didn’t feel like he quite performed at his full potential in wrestling. After college, he still needed to quench his thirst for competition.

“Once my wrestling career was done, I wasn’t done competing,” admitted Azure. “I’ve always been a big fan of watching UFC growin’ up, so I tended to follow that path after my wrestling career. I was still working out. I was still training. My dad had a heavy bag in the garage, so I loved hitting that all the time. Next thing I knew, I just wanted to try it, for sure. For my first fight, I was just training in my garage, and I called up a promoter, and they got me a fight.”

In May 2015, Azure stepped into the cage for the first time as an amateur and scored a submission win at 1:53 of the first round. One month later, he lost by submission in the second round, but he has not tasted defeat since. After going 8-1 as an amateur, he turned pro in August 2017 and scored a TKO win at Jeremy Horn’s Elite Fight Night 29. However, he realized he could no longer work out in the garage if he was to take a real shot at a career in MMA.

“Once my amateur career was going good, I knew I needed to find a gym and start training to get to the higher level,” Azure said. “I made a quick visit down to The MMA Lab for a week and just got beat on all week. I decided this is the place I want to be for my career. Three weeks later, I moved out here.”

The move to the gym in Phoenix came about 13 months ago. The MMA Lab coaches John Crouch and Eddie Cha train a huge stable of fighters, including many who compete in major promotions worldwide. Azure’s roommate is veteran Bellator featherweight Henry Corrales, who is currently on a five-fight winning streak with his last win coming over highly touted up-and-comer Aaron Pico last weekend.

Since making the move to Arizona, Azure has racked up three more wins in just four months. His most recent victory was a decision over A.J. Robb at Legacy Fighting Alliance 53 in November.

“It’s a great promotion,” Azure said. “It’s a good step up. You get a little more exposure with them, which is good. I like lights and shining in front of people.”

Azure grew up stalking his prey. He acts no differently in the MMA cage. However, the prey in the cage is a little smaller than a deer, yet it is typically also smarter than a deer. The prey is also a predator in the cage, so the urgency is dynamically different.

Azure’s next hunt takes place on Friday night at LFA 59 in Phoenix. He’s set to meet Colorado’s Jaime Hernandez on the main card, which airs live on AXS TV. Hernandez has a couple more pro fights under his belt than Azure, but his combined pro and amateur mark is just 5-3.

“I don’t have too much on him,” Azure said. “I know he’s a wrestler. I haven’t game-planned too much around him. I just need to go in there and fight my style — just drag him into my pace. I have always had good cardio, and I like to put pressure on people and just stay in their face. If we go into deep waters, I always have confidence in my cardio.”

Azure’s cardio held up well in his only two fights that went the distance. Even more of a concern for Hernandez could be the fact that all of Azure’s other fights have ended by finish in the first or second round. Azure used to compete as a featherweight, but his time at the Lab made him aware that he’s a small featherweight. He dropped to bantamweight, where he is more on the large end of things. He has a one-inch height advantage over Hernandez, and he is seven years younger than his upcoming opponent. He has some significant physical advantages as well. However, none of this trumps the dedication to his craft.

“I’m just doing the right things and all the necessary work — from my training to my coaches and the people I surround myself with,” Azure said. “I try to eat the proper food and recover. I’m just hungry, man. I love this sport. Just watching the people I’m around keeps me fired up every day. Having Benson Henderson in the room every day is awesome. People show up and do the work. It’s just part of my team. It comes with success.”

Azure has a bright future in MMA. Tomorrow night, he will have the chance to show fans a fresh up-and-comer who has a killer mentality is in his blood.

“It’s going to be exciting,” said Azure. “I go out there to put on a show all the time, and I’m always trying to win. I’m not going to back out of a fight or take any shortcuts. That’s for sure.”

Azure would like to thank all of his coaches and training partners at The MMA Lab, as well as all of his family, friends, fans and sponsors. Follow Hunter on Twitter: @HunterAzure
Advertisement