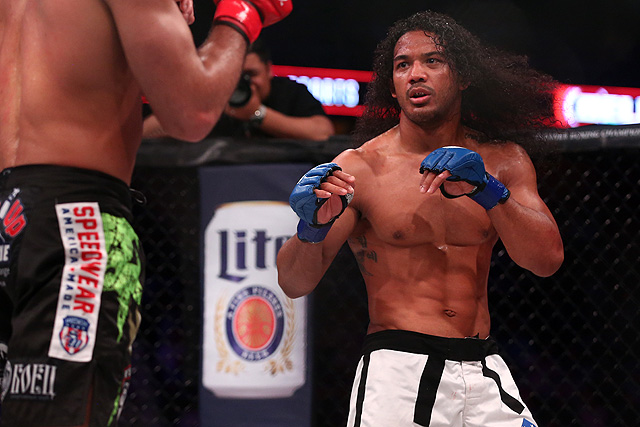 Bellator MMA takes a trip to Europe on Friday, April 6. The promotion heads to Budapest, Hungary, for Bellator 196.

The main event of the evening features one of Bellator’s more recognizable names, former UFC lightweight champion Benson Henderson. Henderson takes on Roger Huerta in a lightweight contest. Huerta has fought for both Bellator and the UFC, but he has taken his talents to ONE Championship for the past handful of years. Henderson hasn’t been as successful as many thought he would be so far in his Bellator tenure. The former UFC champ has gone 1-3 so far and will look to break a two-fight skid when he meets Huerta.

The co-headliner gives two European featherweights the chance to take center stage. Hungarian fighter Ádám Borics, one of Bellator’s brighter prospects in Eastern Europe, takes on Teodor Nikolov. Borics won his Bellator debut by first-round submission almost one year ago, but he has not fought since then. Nikolov is making his Bellator debut, but the Bulgarian has amassed seven victories by submission on the regional circuit.

More Europeans round out this card. Giorgio Belsanti will face Brian Moore in a featherweight duel. At a catchweight of 175 pounds, Ion Pascu serves as an opponent for former NCAA Division I wrestler and blue-chip prospect Ed Ruth, one of the few Americans slated to participate on the show. Ruth will look to extend his record to 5-0. The main card will also head to the women’s flyweight division, where Denise Kielholtz fights Petra Castkova.

The main card will air on the Paramount Network at 9 p.m. ET.

Roger Huerta’s last Bellator appearance came in 2010. Does the UFC veteran deserve his headlining slot opposite Benson Henderson? Will Henderson dominate him?

When it comes to Bellator, the question of whether fighter X deserves to fight fighter Y is a loaded question. Bellator makes any and all fights, regardless of division or skill gap. Nor does the promotion take into consideration whether the fight makes any sense in terms of title shots. This is Bellator, where all things are widely possible when it comes to matchmaking. It doesn’t matter that Huerta has only three victories to his name since his last Bellator appearance. He still has name value, which means Bellator will book him in high-profile bouts.

Henderson has the edge in both the striking and ground game for this fight. His wrestling is top notch, and he has displayed it against bigger fighters like Brandon Thatch. Huerta hasn’t faced anybody of Henderson’s caliber in years. Huerta has struggled mightily since his UFC days, especially against anybody of name during his last Bellator tenure.

This should be a one-sided fight. Henderson will pick away at Huerta and use his wrestling to sap Huerta’s energy. If Henderson doesn’t end this fight by knockout, expect a lot of wrestling and leg kicks from the former UFC champ en route to the victory.

Co-headliners Ádám Borics and Teodor Nikolov sport similar records and have just one loss between them. Is this fight as close as those surface stats would suggest?

Borics has fought on a Bellator card before, but his record is similar Nikolov’s record. A lot of his victories have come against the same quality of competition, too. So what that Borics has fought one guy on a Bellator card who was 1-1? It doesn’t make him supremely more experienced. Borics will be a little more adjusted to the big show, that’s it. Nothing more, nothing less.

Borics is one of the top prospects coming out of Hungary. He’s one of the brighter spots in Bellator’s run through Europe, too. However, Nikolov is right there with him. Just because we’ve heard Borics name one time already, that doesn’t mean we should expect him to steamroll the competition.

This should be a back-and-forth battle to determine who has the better submissions. Both guys are supremely adept at landing chokes and beating their opponents — they have a combined 12 submission victories. Borics is a little more well rounded, and he’s likely to enjoy an edge in the striking department. It didn’t take long for Borics to beat Anthony Taylor in his lone Bellator fight, but this should be a longer fight. Expect to see more of a feeling-out process early before Borics finds his range and uses his strikes to set the table for the submission victory.

Of the remaining four bouts on this card, which fight is the biggest sleeper match-up?

Surprisingly, Bellator is hiding Ed Ruth on this card. If we’re going to talk about sleepers, let’s talk about him.

Ruth is considered one of the best wrestling prospects to come over to MMA. The decorated former Penn State wrestler has cruised so far to an undefeated start through four pro outings. While it would be reasonable to expect a wrestler to have most of those victories by decision as they transition to learning how to strike and setup submissions to complement their top-heavy wrestling, Ruth has gone the opposite way. All four of his victories have come by way of knockout. This includes his stoppage, via knee, of David Mundell at Bellator 178. The results of his fights demonstrate how complete and diverse his striking has become.

This contest is a sleeper, though, because Ruth should be on the American cards drawing interest. Instead, he may be missed on one of Bellator’s trips to Europe where not as many people will tune in.